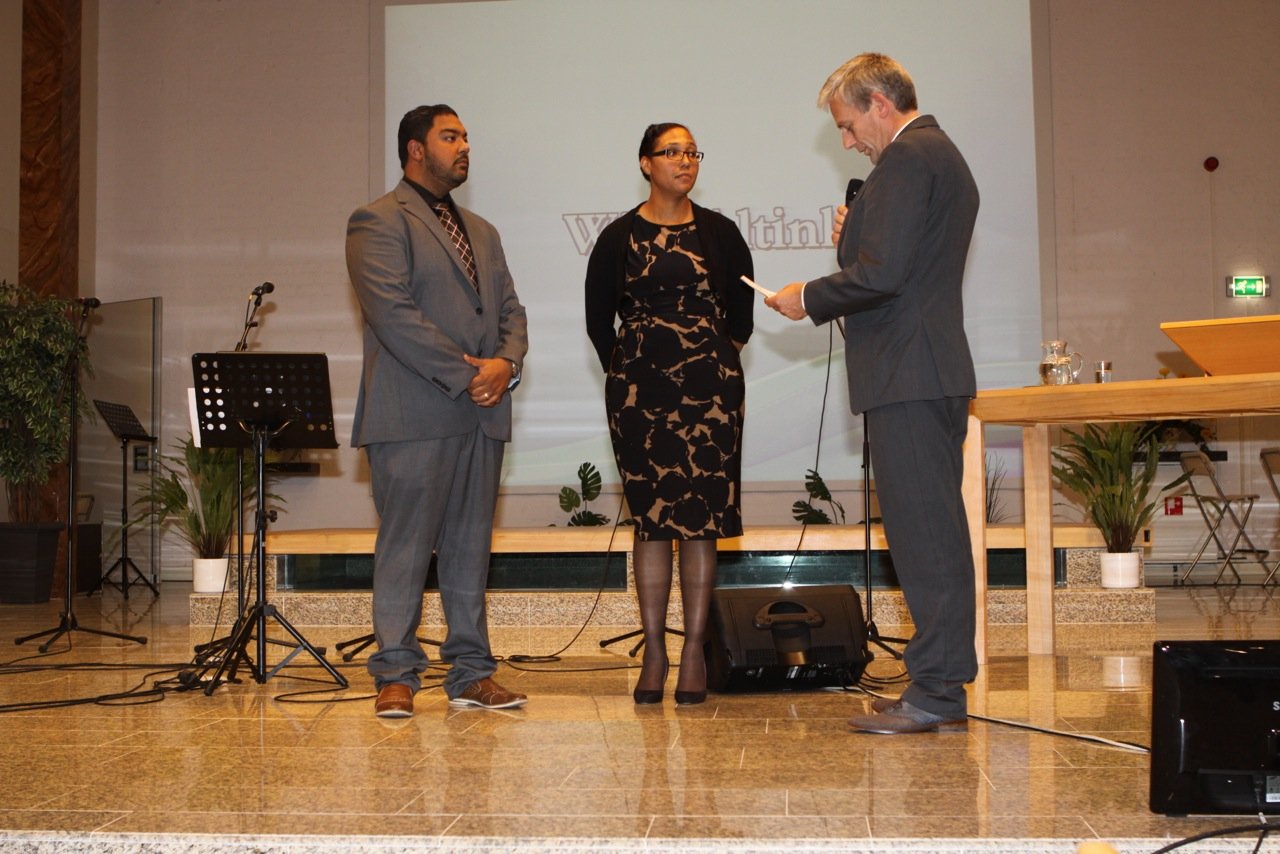 The Netherlands Union Conference (NUC) has welcomed two new pastors, Enrico Karg and Guisèle Berkel-Larmonie, in an ordination ceremony at the Christus Koning church in the Hague on September 21, 2013. Berkel-Larmonie is the first female pastor to be ordained in Europe.

Following a brief worship service, Pastor Jan Koeweiden and Pastor Dwight van Ommeren, who mentored the young pastors during their two year internship, took the opportunity to offer their soon-to-be colleagues a final word of advice and support. Van Ommeren gave seven tips for success in ministry. Koeweiden spoke jokingly of how, in a time of financial and social crisis, the job of a pastor is “the job of a lifetime because it is a job for life”. The two pastors also delivered a prayer for the two candidates before Pastor Jurriën den Hollander, director of the NUC’s Ministerial Association, offered the prayer of ordination.

Before the laying on of hands, Dr Tom de Bruin, executive secretary of the NUC, held a sermon on what it means to be ‘called.' Citing the stories of Moses, Isaiah, Elisha, Jeremiah, and Ellen White, the sermon focused on the narrative of Peter and his miraculous catch in Luke 5:1-11, explaining that just as each of those people was miraculously called, so every one of us has our own calling from God. “Everyone is called to something different,” said De Bruin, “but everyone is called. None of us is worthy, but if we listen to God’s call amazing things will happen.”

The newly-ordained Pastor Karg and Pastor Berkel-Larmonie gave their own testimonies in response, and shared their personal stories of calling. “It took me a long time to recognize it myself,” said Karg, “but when I look back there were many people who saw a pastor in me. Without them I wouldn’t be here today.”

Berkel-Larmonie’s testimony was more sober in tone, but no less moving. “For a long time I fought my calling, and when I finally accepted it the road was long and uncertain, but now I understand why God let me take so long to make it here. It’s like my husband Glen always says—God wanted me to be here at this exact time.”

NUC President Wim Altink delivered the charge, and both candidates responded to the questions with a resounding “Yes.”

“It is amazing that we have young, fresh spiritual leaders in the church,” said Altink. “With these leaders our church has a bright future. I can safely say this is a church to be proud of.”

This last phrase refers to the title of the strategic plan for the NUC for the coming five years. Berkel-Larmonie and Karg mark the beginning of what the NUC hopes will be a fresh new generation of young pastors. A staggering 65% of the NUC’s current pastors are due to retire within the next fifteen years. Pastoral interns Tom Meijer and Oliver Yeboah, the next young candidates on the road to ordination, were also present for the ceremony.

“I am very glad that the Netherlands had the courage to ordain [Berkel-Larmonie],” said Pastor Jeroen Tuinstra, president of the Belgian-Luxembourg Conference. “We are very happy that our northern neighbors have taken this stand for equality and are prepared to carry it out. We hope that this may spread to other countries, or that at the very least it may have a positive impact on the Theology of Ordination Study Committee.”

Pastor Elise Happé-Heikoop, commissioned in an identical ceremony more than a decade ago and now also officially listed on the NUC’s reports as ordained, was among the first of the pastors present on the stage to welcome Pastor Berkel-Larmonie into the ranks.

Looking back at the day, the tone of the service was clearly focused on God, and his calling of all people alike. In this way the NUC administration followed the tone set in the decision at the Union session last December, where the members called for total equality between all people serving the church. While it is a historic day for female pastors, the emphasis of the day was not on any human affairs, but rather on the unimaginable power of God, who can still call people to serve his church, even in 2013.

Read The Road to Women's Ordination in the Netherlands from November 12, 2012.