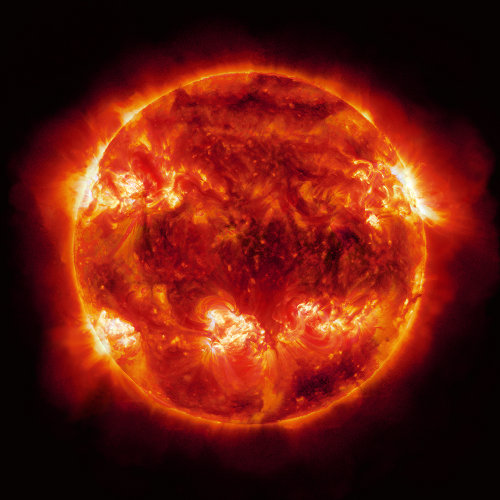 This is part 2 of Mailen Kootsey's first article in the series Bringing the Real World to Genesis. You can read the introductory article here and part 1 of WHAT MAKES SCIENCE VALUABLE? here.

In Part 1 of this blog, I wrote about science as the search for understanding, the dependence of science on data or observations, and the importance of scientific communities. Experiments in most fields have become very technical in recent years because of the development of sophisticated instrumentation and control methods. As an example, one of my scientist friends developed a method of measuring the changes in concentration of calcium inside a single muscle cell, the chemical signal that activates the muscle contraction. This activation occurs in less than one hundredth of a second and the diameter of the cell is less than the diameter of a human hair! Sophisticated measurement techniques such as this one require specialized training to design and execute experiments. It is also true that scientific thinking has grown more complex along with experiments and specialized skills are needed to develop scientific ideas. Part 2 of this blog will review some important concepts in scientific thinking.

Reduction has traditionally been the principal method of science. Reduction as a method of science means to break the system under study down into its components along with information about how the components interact. Then the properties of the components are studied as independent units. For example, if you are interested in how the human body works, you would separate out blood circulation, digestion, the skeleton, muscles, the brain, etc. followed by study of the properties of each of the subsystems. Or, if your goal is to understand the circulation of blood, you would separate out the heart, arteries, veins, and lungs. Reduction can be applied at any level, from the nucleus of atoms to galaxies and the universe. The method of reduction clearly leads to a hierarchy of physical scale and complexity. Scientists have found it necessary to concentrate their work on one level of this hierarchy, considering relationships with one level above and one level below the level of interest. For example, in living systems, cell biologists think about how their cells work together to create a functioning organ (one level higher) and what biochemical systems exist in their cells (one level lower). They do not usually try to understand their cells in terms of sub-nuclear physics or sociology of individuals (both multiple levels away). There is a desire to understand the effects of genes up several levels in the biological hierarchy for the purpose of understanding diseases, but these studies are not yet on solid theoretical ground.

In recent decades, recognition has grown that the opposite of reduction, i.e. synthesis or assembling a system, is also an important scientific activity. This topic is sufficiently challenging and important so that an entire blog will be devoted to it later in this series.

Scientific explanations can be described as models. Scientific ideas serve for scientists the same function as toys serve for children – models of behaviors that are (or for children, will be) encountered in real life. The toy truck has a recognizable shape and number of wheels and it may have a body suitable for carrying other objects, just as a real truck does – only on a size scale suitable for manipulation by children. Toy trucks are only expected to model some of the characteristics of real trucks and the child eventually recognizes the difference between the toy and the real. This is an excellent analogy of scientific thinking. Scientists attempt to build a model of their observations, a model that behaves like their observations as conditions change.

Scientists work with different kinds of models, usually depending on the amount and quality of observations (data) they have to work with. The kinds of models can be classified according to the amount of detail the model can reproduce (just as toy trucks can be very simple for a two year old, but a model truck or race car has to be much more detailed to be interesting to a ten year old). Here is a classification of model types in common use, from simplest to most sophisticated:

Here are important characteristics of a good scientific model:

Because the most complex type of model (from name to mathematical model) in use in any field depends largely on the precision and repeatability of data available in the field, scientific areas of study are sometimes classified as “soft” or “hard” depending on whether the best models are low or high on the scale of details. Physics has long been classified as “hard” science because of the quality of data and because mathematical models have been a part of physics since Newton.  The social sciences have to work with very complex situations not under strict control, so the data collected has larger statistical deviations, models are less detailed (compared with the systems studied), and the field is considered “soft”. Biology has traditionally been considered “soft”, relying on names for models. In recent decades, the nature of biological data has changed rapidly with new instrumentation and the field is rapidly moving into mathematical models and becoming a “hard” science.

Occam’s Razor: What happens if two or more models are proposed for the same observations? The choice could be made by deciding which model fits the observations best, or which model makes the most accurate predictions. But, suppose those criteria don’t make a clear distinction; then what? Scientists use a rule called Occam’s Razor, or the law of parsimony, economy or succinctness. This rule is attributed to the 14th-century English Franciscan friar Father William of Ockham, although the principle was known earlier. The rule says simply: if there are multiple explanations or models than work equally well, choose the simplest one. In other words, there is no need to add complexity to a model if the added complexity does not improve the model’s performance.

Methodological Naturalism: Finally, there is one last rule for the practicing scientist: methodological naturalism. Naturalism is the philosophy that only natural explanations can be used in scientific models and thinking; no supernatural explanations are allowed. (Here I am using “supernatural” in the scientific sense, meaning something that breaks or bypasses natural laws, rather than just something we don’t understand.) This sounds like atheism and pure naturalism is just that: the assumption that everything in the universe will be explained (eventually) by natural principles with no need for intervention by a supernatural being. Methodological naturalism means following naturalism as a working method in science, without adopting it as a philosophy. It means that a scientist can believe in God and still follow the rule of never incorporating the supernatural in an explanation for observations. The reason that methodological naturalism is essential in science is illustrated in a cartoon drawn for a scientific journal by Sydney Harris. 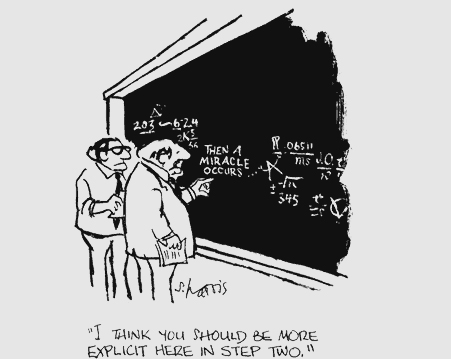 Scientists find this cartoon funny because using the supernatural in a model means giving up and abandoning scientific thinking when the data are difficult to understand. Over and over again in the history of science, an event that seemed to require a supernatural explanation has turned out to have a natural cause. The limits of scientific understanding have changed enormously through recorded human history and we can be thankful that the early scientists did not abandon their work when it seemed impossible.

If science does not permit the supernatural as an explanation in models, is there room for any association between scientific thinking and religious belief? There is no contradiction between believing in a Creator God and making a practice of studying in detail how the universe and everything in it works. Science is not atheistic, even though some scientists are. The argument can be made that studying the natural world is one means of gaining understanding about the Creator God. Problems do arise when science is used in attempt to prove the existence of God or when theological statements are equated with scientific conclusions. There is no room in this introductory blog to address these challenging issues, but they will receive more discussion in later installments.

This series of blogs will continue with brief glimpses into several scientific fields, especially those that have some overlap with religious traditions. The observations described are real. Each reader will need to decide how they will relate to the models (theories) generated by the best efforts of science to understand these observations described in each field.