In Six To One Vote, NAD Affirms Women's Ordination 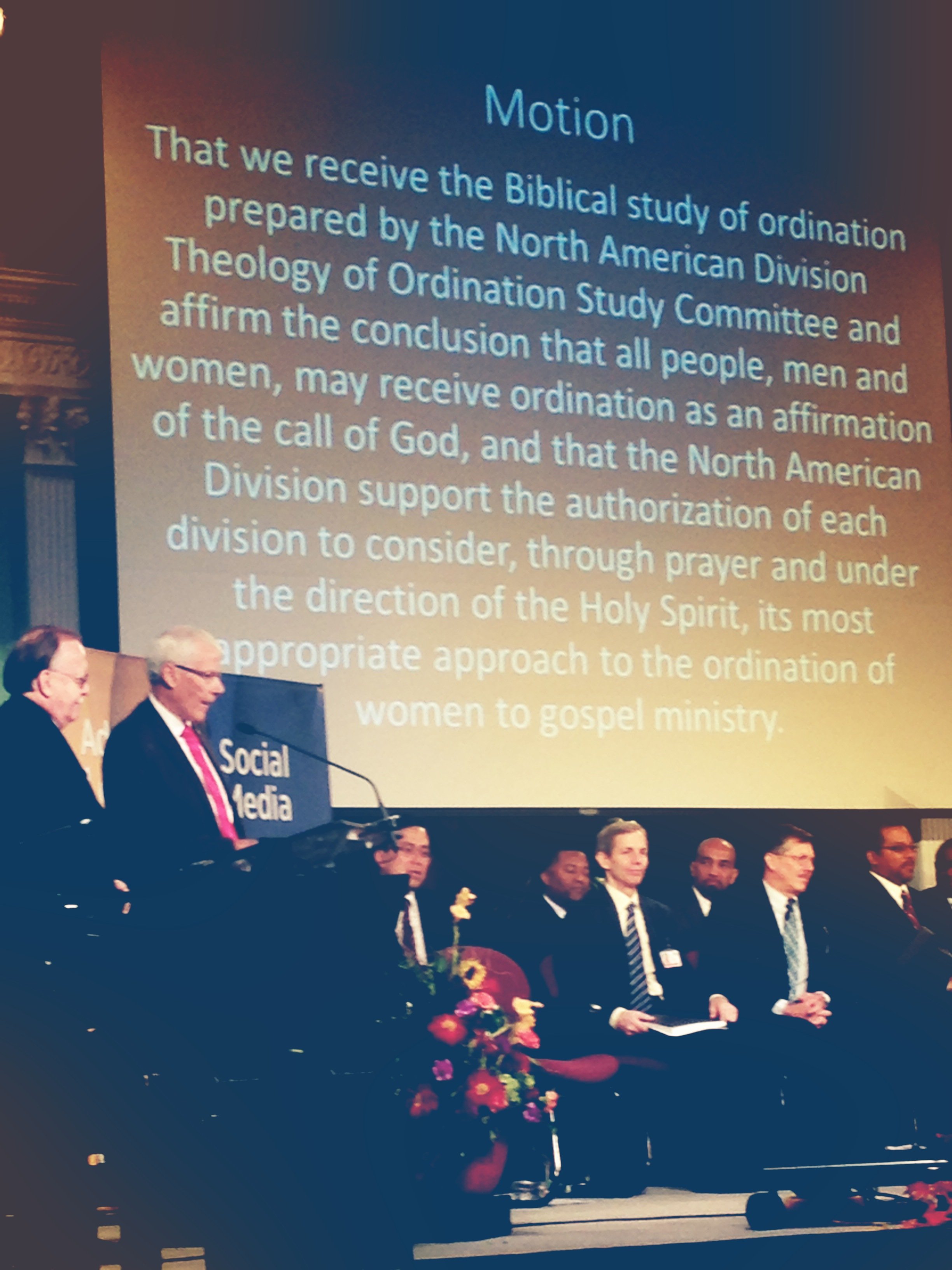 SILVER SPRING - There were no cheers this time. North American Division president Daniel Jackson had adjured delegates to refrain from applauding in deference to the sensitivity of the subject. The subject was the North American Division Theology of Ordination Study Committee report and its conclusion that both women and men should receive ordination. Even in the absence of applause, the buzz among delegates made clear their approval of the outcome: 182 in favor of ordaining women, 31 opposed, and three abstained.

The session began as have all the sessions at these Year-end Meetings, with worship. Pastor Mike Tucker offered the morning devotional, a call to leaders to present Jesus’ love (“and stop preaching conspiracy theories!” Tucker insisted). He offered the conversion story of a cynical, former-Adventist as a case study in what personal interest in people and messages of God’s love can accomplish.

When Tucker finished speaking, Dan Jackson announced a brief recess. At 9:00am, Elder Jackson called delegates to order. They kept talking. Jackson began singing “Standing on the Promises.” Slowly the audience joined in. When at last the delegates came to order, Jackson introduced the day’s business. “We did all in our power to ensure individuals on this committee had diverse views. No one here is telling you what to believe,” he told delegates.

Jackson addressed the elephant in the room: GC President Ted Wilson’s request that delegates not vote on the report.

“We will take a vote,” Jackson said, but quickly added, “I want it to be clear that if we vote that women should be ordained, it is not a vote that you in your organizations go out and do whatever you think you should. The vote to follow is an affirmation of the report. We are not changing NAD policy, but giving an indication to the World Church where we as a division stand.”

Bietz introduced the committee’s report with the first of several video presentations, created by the North American Division, featuring pastors, professors and administrators from around the division. The first vignette featured the words of Acts 2--”'In the last days,’ God says, ‘I will pour out my Spirit on all people. Your sons and daughters will prophesy, your young men will see visions, your old men will dream dreams.’” The clip ended with several people stating to the camera, “We stand united in mission.”

Following the video, Bietz read off a litany of prior occasions spanning the past fifty years that women’s roles have been studied by some church entity. For each event, a member of the committee (all of whom sat on stage) stacked the respective event’s report on a table. The resulting pile of documents stood precariously, nearly two feet high, looking as though it might fall.

Then Bietz read from the report’s executive summary, which included the committee’s consensus statement:

We believe that an individual, as a Seventh-day Adventist in thorough commitment to the full authority of Scripture, may build a defensible case in favor of or in opposition to the ordination of women to the gospel ministry, although each of us views one position or the other as stronger and more compelling.

1. In harmony with our biblical study, we recommend that ordination to gospel ministry, as an affirmation of the call of God, be conferred by the church on men and women.

2. We humbly recommend that the North American Division support the authorization of each division to consider, through prayer and under the direction of the Holy Spirit, its most appropriate approach to the ordination of women to gospel ministry.

Wahlen argued that the primary task should be delving deeply into Scripture. He took aim at the idea that one might consider Scripture’s trajectory. Likening the idea to firing a missile, Wahlen said the problem is that too often people begin with the target, tracing the missile’s path backwards.

Wahlen and Reynolds agreed that a proper reading of Scripture would affirm male headship, both in the home and the church. Reynolds stated that Scripture provides no clear instance of women in headship roles, no priestly roles, no apostolic roles. Jesus ordained 12 men from a larger group, and the creation order (man first, then woman) clearly implied male leadership.

Allegheny East Conference ministerial director Stephen A. L. Richardson presented the theology of ordination, concluding that “ordination serves to formally sanction an individual for the purpose of fulfilling the church's global mission. The worldwide body accepts in good faith what has been locally ratified.”

Following Moskala, Andrews University professor Richard Davidson considered Old Testament texts that impact the discussion. Davidson examined the passages Wahlen and Reynolds used in opposition to ordaining women, and he sought to show that the texts in fact lead to the opposite conclusion. Davidson also posited that male headship is not simply about roles--roles are flexible and transitory, he observed. “It is nothing less than a caste system in which there is permanent subordination of the female gender to the male gender,” Davidson said flatly, and suggested that against this and all other caste systems Ellen White's words apply: "Caste is hateful to God. He ignores everything of this character." (CC 291)

Pioneer Memorial Church pastor Dwight Nelson spoke next, describing his conversion story from being a staunch supporter of male headship in his pulpit to being a firm supporter of women’s ordination, forcing a public recanting of his former position. He offered a four-point excursis on what led him from one camp to the other.

Andrews University professor Denis Fortin delved into Ellen White’s views on ordaining women. He noted that while she was silent on the question of ordination itself, she was an enthusiastic supporter throughout her life of women in ministry. He concluded with a separate point: “Our issue is one of trust,” he said. “Can women be as faithful and devoted as men?”

Darius Jankiewicz, an invited presenter and Andrews University professor offered a paper by way of video in which he considered the question of authority. He suggested that a counterfeit view of authority, which entered the Church, was hierarchical, elitist, sacramental and male-headship oriented. Jesus’ understanding, he proposed, was non-hierarchical, non-elitist, non-sacramental and servant-oriented. If the Adventist Church were to follow Jesus’ understanding, Jankiewicz argued, the idea of ordination as an indicator of status and power over would not be a question. Instead, pastors, both men and women, would assume the posture of servants.

Finally, Gordon Bietz considered the question of whether ordaining women would threaten church unity. He noted that ordaining would not necessarily indicate authorization to practice in places the ordinizations were not recognized. Focus on Jesus will ensure world-wide unity, Bietz argued, and cautioned that disunity would result if all were forced to come to an agreement on issues over which there is no consensus. “We assure schism in the church when that which is conditioned by history is imposed by law, when that which grows from culture is made policy for all, when that which is local in importance is made universal in application.”

Following his closing comments Bietz offered the committee’s two recommendations as a motion. It was quickly seconded. Dan Jackson, noting that the lunch hour had already passed, recommended tabling the motion until after lunch. This was voted and approved unanimously.

After the committee reconvened to more hymn-singing with Jackson, discussion took place on the motion. First, delegates were invited to ask questions of the committee. One delegate asked whether the report was biased since the two sides were not equally represented, and since those on the committee already held firm positions before the process began. Gordon Bietz pointed out that the time allotted was commensurate with the relative proportions of sentiment on the committee: 80% supported ordaining women, and consequently that position was given 80% of the presentation time.

Oakwood University president Leslie Pollard addressed the question of bias stating that he didn’t feel as though biases, which every person brings to the issue, were disqualifying if one took a position but maintained openness to the possibility of being proven wrong.

When the floor was subsequently opened for comments, Michigan Conference president Jay Gallimore spoke, requesting extra time. He contended that the outcome seemed to be certain (and favorable to women's ordination) and he lamented what he felt was inadequate treatment of the male headship position. He asked to be allowed to present ten statements in favor of male headship. Jackson obliged, and Gallimore took five extra minutes to make his case.

At Jackson's request, the final vote came without audible responses like those that have characterized some other recent votes in favor of ordaining women, but the numbers themselves did the talking. Jackson announced the 6-to-1 results as a lopsided graphic appeared on screen. While, as Jackson stated at the outset, the vote does not determine NAD policy, it is another ringing affirmation of women as ordained gospel ministers in the Seventh-day Adventist Church. And when Jackson called for a show of thanks to committee members for their work, the audience responded with a sustained, standing ovation.

For more on the NAD Committee Report, see www.nadordination.com