On the La Sierra Resignations: The Lawyer Factor (ii) 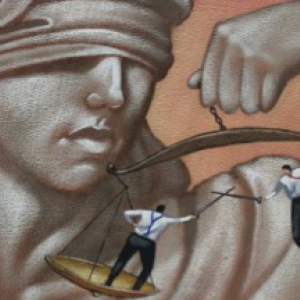 You've heard the old saying: "The only two certainties in life are death and taxes." But maybe that statement should be amended to include a third certainty: lawyers. And it's true even in the Seventh-day Adventist Church.

The Board met in closed session and discussed issues relating to the resignations, including a letter received from the attorney for the three employees. The University’s legal counsel was present at the discussion. The Board referred the matter to counsel and has no further comment on the matter at this time. The resignations continue to be in effect.

As a child I was taught I have a guardian angel who's there to protect me from harm. These days, whether we're an individual or a corporate entity, it seems necessary to have a guardian attorney. But lest you think I'm being sarcastic, let me assure you that I'm not faulting the church in the slightest for utilizing lawyers, whether those lawyers are employed in-house, on a retainer or on an as-needed basis.

As Christians, we exist in a unique situation. We're citizens of the kingdom of God, and we're citizens/residents of some kingdom on earth. In my case--and in the case of the men who resigned from their positions at La Sierra University--the earthly kingdom is the United States of America. Both kingdoms have their rules and regulations, their privileges and responsibilities. And in both there are motivators, both intrinsic and extrinsic, to encourage conformity to that kingdom's expectations.

For more than two thousand years, those of Judeo-Christian heritage have been commanded by the kingdom of God to do such things as "love mercy, act justly and walk humbly" with God (Micah 6:8). Two thousand years ago Jesus said we were to treat others as we would want to be treated (Matthew 7:12). He likewise encouraged us to figure out ways, if at all possible, to settle our differences without resorting to the legal system of the earthly kingdom where we reside.

In the days of yore, the earthly kingdoms may not have paid much attention to how we treated our family, our employees, our slaves. But over the centuries the collective social conscience in countries around the world began to become more attuned to moral/ethical/social responsibility. The western world went through a collective experience that, in retrospect, we refer to as the Enlightenment. In reality, it wasn't just a phenomenon of the past but has been an ongoing process.

Despite the ever-increasing awareness of our social obligations, in the United States at least (and by no means just in the United States), governments have been hesitant to step into the affairs of the parallel kingdom (the kingdom of God) that co-exists in their territory. So, over the centuries, governments have made many exceptions for churches, often to the detriment of the churches themselves--because governmental failure to intervene creates an environment that allows them to escape responsibility and accountability.

But that's all changing. In part, because governments have--to the discredit of churches--at times had a more focused moral/ethical/social vision than have the churches. So governments have demanded things that churches should have done but didn't. Unfortunately, governments have also demanded things that churches shouldn't have to do but may be forced to do simply because they've played the role of reacting to social progress rather than leading the way, setting the agenda and establishing the parameters for discussion and change.

It hasn't helped the credibility of churches that we've so often been dragged kicking and screaming to decisions that a few decades later we finally admit were really the right decisions and we should have been leading the charge. (We as a denomination have a poor track record of apologizing to those we injured along the way by our inaction and resistance.)

A hundred years ago, relatively few employment issues in the Adventist Church would have ever found their way into the court system of the kingdoms of this earth--because relatively few laws existed concerning how employees should be treated. That has all changed dramatically. Thanks to labor unions, social progress, more widespread education, greater affluence and an array of other factors, governments have taken an increased interest in employment matters. At times, even without any prompting from disgruntled employees, governments have stepped in and demanded adjustments in employment practices within the church. And some countries are much more demanding than the United States.

When the Seventh-day Adventist Church claimed a few decades ago that it was our theological teaching that women shouldn't receive equal pay for equal work when employed by the church, the U.S. Government disagreed (http://www.aaw.cc/PDF_files/WOYA_06_McLeod.pdf). The (U.S.) kingdom on this earth declared that our denomination didn't have that choice to make. Just as no individual U.S. citizen could have had slaves after emancipation (no matter how much he or she believed in slavery), so no denomination could pay women less than men for equal work (no matter how much that group believed it to be a divine principle), granted that laws to the contrary had been passed.

Of course, many of the workplace issues that have created tension between churches and governments are far more mundane and not proclaimed to be connected to deep moral/ethical/social values. But the fact is, the two overlapping kingdoms are intimately intertwined. And the kingdoms of this earth are going to have the final say--in the short term, at least. So we'd better have guides--guardian lawyers--helping us to work our way through the legal/bureaucratic maze of the kingdoms of this earth.

So far, so good. But there is a problem. And the problem is this: The Seventh-day Adventist Church, categorically should seek to protect its interests, both as they relate to the kingdom of God and as they relate to the kingdoms of earth. And I believe they're definitely seeking to do so. But the church must seek to do it in the context of the moral/ethical/social values of the kingdom of God. And one of those values is to treat others as we would want to be treated. The church should seek to ensure that, as a corporate entity, the church itself isn't given short shrift. That it isn't taken advantage of. That it manages its affairs judiciously. But it should equally seek to ensure that it treats its employees fairly. If the church is going to have a lawyer--or a battery of lawyers--who dot every "i" and cross every "t" of self-protection, the same privilege and right should be recognized as necessary for the every church employee.

In today's world, legal representation is imperative in many situations. While we would hope that all differences between employees and the church organization could be settled amicably through open and frank discussion and a spirit of caring, it's patently unfair if the organizational entity has access to legal counsel but the individual employee is not only denied that right but spiritually disparaged for even seeking it. From personal observation of numerous cases close to me, as well as from reading about high-profile cases further afield, it's clear that often the right to legal counsel is denied employees (see here and here).

Too frequently employees are blindsided, handed documents to sign that have been formulated, vetted, reviewed and revised by church-paid lawyers--documents that have significant implications for future employment (both inside and outside the church), have short-term and long-term financial implications (retirement, for example), and have an array of other implications that probably don't even enter the employee's mind, granted the extreme stress inherent in such an employer-employee encounter. Yet the employee is pressured to take action before leaving the room--without the benefit of reflection, without the benefit of consultation with family and friends, without the benefit of appeal to a larger and more representative church body, and without legal counsel. And very often there are dire threats of the consequences that will ensue if the employee doesn't comply right then and there.

I wasn't present when the three employees and a board member from La Sierra University were reported to have been given the option of resigning or having the matter brought before the entire university board. I have no special insights other than the sketchy reports I've read online. But as I've read those reports, I've had a sense of deja vu. I do have more than thirty-five years of denominational employment in which I've experienced and observed much. I've spent more of my ministry than I would ever have imagined possible seeking justice for employees who have been abused by the system. The problem is widespread. Sadly, our church doesn't have an employee-friendly corporate culture across the board--though there are a few exceptional administrators who shine like bright stars. But they're so impressive precisely because they're so much the exception.

I find it extremely unlikely that the options presented to the three LSU employees were as simple as (a) resign or (b) face the board. It's almost certain that the options were actually "packages." It would go something like this: If you choose resignation, you'll get a decent severance payout, retirement, a clean personnel folder, a positive letter of recommendation and. . . . But if you choose to meet with the board and defend yourselves--and you end up getting terminated--you'll not get this, this and this and you will have to face this, this and this. . . . I'd be highly surprised if the men were given opportunity to seek legal counsel before making up their minds to resign. (I find it hard to believe that a letter from their lawyer would have been read to the full board after the fact if legal counsel had already been provided prior to their choosing to resign.)

But my reason for writing this article isn't specifically or exclusively about this case. It's about a denominational trend that this case highlights, whether or not the specifics apply in every detail. In fact, my experience and my observation suggest that this is more than a trend. It's virtually a denominational norm. The examples are legion.

Where did we ever come up with the idea that lawyers are anathema if representing a church employee but indispensable if representing a church organizational entity. Certainly, it makes total sense for the organizational entity to have "their expert" be their negotiator, looking our for their corporate interests as related to the kingdoms of this earth. But do employee interests not exist? Why should the employees be denied (or have their status as good Seventh-day Adventists questioned) for wanting--or demanding--their own "expert" to negotiate for them and look out for their personal interests? Why the double standard?

Remember, the rules of God's kingdom command us to treat others as we would want to be treated. And they apply whether our interactions take place in the context of God's kingdom or in the context of the earthly kingdom where we happen to reside. It seems that in pursuing a very legitimate concern to protect the interests of the church, the church has to a great degree lost sight of a very real obligation to see that its employees are afforded the opportunity to protect their own interests as well. Why should church employers have the benefit of both guardian angels and guardian lawyers, while church employees must depend solely on guardian angels?