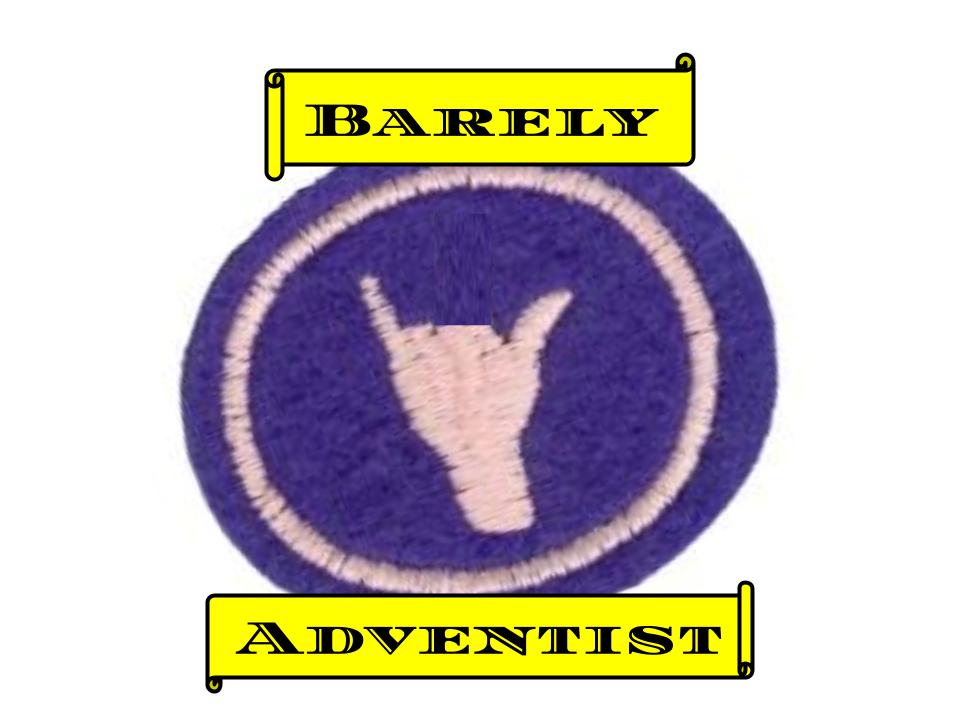 If you haven’t come across BarelyAdventist yet, you need to immediately go check it out. The satire and humor site is reframing old Adventist jokes and social critiques in an attempt to stimulate growth within the community. So far, they have remained anonymous, which meant that we had to do this interview over google chat. I spoke to their lead writer whose user name is Stripples Rule.

Question: So, Barely Adventist has been popping up all over the place. I see it on twitter, shared on college friend’s Facebook walls, even the older generation is putting this all over social media. Can you tell us a little bit about what the website is?

BA:Ha! I'm glad people are hearing about it. The site is supposed to be an Adventist satire and humor blog. We originally set out to write a basic opinion blog on Adventism, but then thought that there was enough of that out there already. The satire idea came later, quite suddenly while I was walking.  It was our Damascus Road moment!  We first posted in early March of 2014 and the fact that the whole thing took off sort of took us by surprise

Question: You guys have had great success and in the process you’ve tackled some pretty serious issues. I’m thinking of your article “Locals Beg Church Construction Missionaries to Stay Home” about pitfalls of many mission efforts. One of my favorites was “Walla Walla Puts Oakwood Students in Promotional Brochure” talking about race issues. By presenting them as satirical news you’re really adding something. Can you expand on what inspired you to use this format?

BA: Yeah, we try to use material that is already funny to a lot of Adventists and that will have broad appeal. The news format is fun, partly because we are news junkies ourselves and partly because we've seen satirical news work well on sites like The Onion. Using satire allows us to occasionally talk about volatile subject matter from what hopefully is a fresh perspective rather than adding to the existing rants online. We are trying to avoid over-earnest soap boxing in what we write, not because we care any less about the issues than other bloggers, but because the humor sometimes helps us see issues more clearly.

Question: That's a great point. In your “About” section you say, “The whole point is to help the Adventist faith community grow through conversation and humor.” I’ve grown up in Adventism and learning to make fun of ourselves wasn’t exactly a skill we were taught. There’s an undercurrent of treating Adventism as a very serious matter. Lately, it seems like that’s starting to change. There’s a twitter handle @thedailyhaystack that’s pretty popular and of course your site. Can you talk about what kind of growth you're looking for within the community through humor?

BA:We love @thedailyhaystack! I grew up as a missionary kid and definitely relate to what you are saying about a culture that tends to take itself very seriously. It was actually a struggle to find the right tone to talk about challenges we face in Adventism. We don't want to sound flippant or dismissive because we are actually very actively involved in our local church and find a lot of meaning from practicing our faith. Satire allows us to talk about issues like GC over-reach, tough social/civil rights issues and denominational arrogance in a way that hopefully exposes some of the ridiculousness of our shortcomings in a lighter way than simply screaming, “THIS IS WRONG!!”

Satire online also allows for an interesting dynamic in terms of the responses to the fake news. Some of the tirades from incensed readers illustrate the point behind our stories better than the stories themselves.

Question:Oh, you guys get that too? You did a piece “Spectrum Wins International Award for Angriest Comment Section,” which is definitely something we run into when trying to bring articles that start conversation. You’ve got your share of angry commenters, some of them whom, perhaps, don't realize you're doing satire, but you certainly have a lot of supporters. What kind of response have you been getting and how does it inform what you’re doing?

BA:Hahaha! The irony of the Spectrum piece was that soon after we posted that story, we got a storm of angry comments on some of our posts... we had it coming!

And yes, we have a lot of first-time readers that don't realize we are a satirical blog. The "Amazing Fact: Doug Batchelor to join Dancing with the Stars" post is a classic example of readers taking us extremely literally.

We actually got a little nervous and had to delete some threatening comments, especially the ones about impending bear attacks, etc. We are getting a fairly good balance of readers that really dislike our style and readers that do. If you check out the comments in our “About” section, you'll see what I'm talking about. We try to listen to both our supporters and our detractors to keep improving the site. Sometimes we go too far and we try to course-correct based partly on feedback.

Question:I assume this whole process has given you some new insights into the community. Have you hit on anything that really sticks out?

BA:Yeah, we are learning as we go. I think our main takeaway so far is that both active Adventists and former Adventists feel strongly about this faith and seem to crave different forums in which to discuss the issues. Something about the satirical format draws people in regardless of how orthodox they are and helps them open up.

Question: You’re doing this interview anonymously and you’re not identified on your site. What’s the reasoning behind that decision?

BA: Well, we aren't sure how long we are going to stay anonymous. It's working for now, but certainly a lot of people already know who we are. It doesn't exactly take any serious sleuthing to dig up clues. Part of the reason we are staying anonymous is that the mystique sort of helps the mood of the site, keeps it light...  But we'll probably come out at some point.

Question:I must admit, every time I read a post, I make guesses at who could possibly be writing these. Have you ever talked about BarelyAdventist with someone who didn’t know it was you?

BA:Yes, I have! I was in Southeast Asia talking to a student missionary from Southern who said there was some fake news going around about parents who wanted a refund for their unmarried kids. It was hard to keep a straight face.

Question:I must say, you’re pretty well informed on the SDA world. How do you continue to get ideas?

Question:Can I get listed as a contributor then?

BA:Ha! You can be our scapegoat.

Question:So, I only have a couple more questions. Do you have any plans for the site going into the future?

BA:We'll for sure keep posting and we are already experimenting with material that isn't strictly satirical. We definitely want to be part of the future conversation about Adventism in a way that shows we care, but that also liberates us from pro-establishment spin on the one hand or angry critique on the other.

Question:Last question, you guys post incredibly frequently. I’m sure you’re putting in a lot of time and energy. What are some of the ways that people who like what you’re doing can support you?

BA:Well, we are definitely taking this gig seriously as a ministry, so spreading the word about the site is always appreciated and an occasional tip here would be awesome.

Article ideas are welcome at submissions@barelyadventist.com  and there's tons of fun to be had shopping at the Super SDA Store.

And we wouldn't be Adventist if we didn't ask for some serious prayers for wisdom. :)