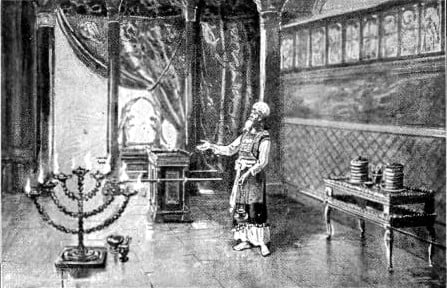 As a belief, the Seventh-day Adventist doctrine of the sanctuary offers a marvelous reading of the Hebraic worship system. This analysis reveals a glorious picture of Jesus Christ that was, among other ends, designed to prepare the Jewish, covenant people for His arrival; His First Coming. It did not accomplish this, for the most part, due to the intransigent disobedience and self-assuredness of the Israelites. Yet, today, it stands, for those Christians who will look, as a luminous architectural and temporal analogy to the work of God, in us, that Christ completes.

The investigative judgment (I.J.) portion of the doctrine, however, remains an essentially indigestible aspect of Adventist teaching on this subject. Even the current, fourth quarter 2013 Adult Sabbath School Bible Study Guide—which covered the I.J. in lesson 9—admits in its introduction that "no other doctrine of the Seventh-day Adventist Church (with the possible exception of the Sabbath) has faced so many challenges."

It doesn't define those challenges. I would like to forward my own brief list of three such obstacles, however.

They are as follows:

1. Unilateralism— SDAs are the only Christians who hold the investigative judgment to be true. (The Study Guide does mention this fact, saying that "the sanctuary message is the Adventists' unique doctrine," though, perhaps oddly for an evangelical body, it does not note this as a challenge.)

2. Divisiveness— The I.J. has been the most conflicted doctrine within the SDA church, historically. "No other doctrine of the Seventh-day Adventist Church (with the possible exception of the Sabbath) has faced so many challenges," states the 4th quarter Sabbath School lesson introduction.

The 1980 Glacier View debacle, which prominently resulted in the dismissal of Dr. Desmond Ford and resignations from dozens of SDA pastors, was certainly the height of such divergence. Ironically, then, Ford would certainly agree with the quarterly, here: As he outlined in the nearly 1,000-page manuscript he submitted to the Sanctuary Review Committee at Glacier View, the I.J. has been subjected to a long history of resistance from Adventist scholars, much to the chagrin of SDA administrators.

As it pertains to this legacy, though, the church declares victory: "Fortunately, throughout the years," says the lesson intro, "these challenges have not only been withstood, they have increased our understanding of this crucial teaching and have made us, as a people, stronger in our understanding of salvation."

One may agree with this summary. But a calvaryman, returning from the front line, could say the same about an arrow jutting from his side. In other words, though withstood, though illuminating, and though strengthening, these counterpoints against the I.J. doctrine have not been eliminated. Like an arrow in one's torso, they stick out visibly and arbitrarily.

3. Inscrutability— Supporting evidence for the I.J. is often hard to understand, convoluted, contradictory, very technical, highly debatable, inaccessible, or nonexistent. In other words, it is hardly the model of a secure and reasonable biblical doctrine.

So, for example, two points:

a)For it to work, the I.J. requires that, on the basis of the scantest evidence, human beings confirm that on a given day, in a given month, in a given year, an action occurred, in an extra-universal realm, amidst divine beings; indeed, an action for which there is no possible detectable evidence, counter-action, or sign on Earth.

This is, again, unique, as a supposedly biblical schema. Indeed, the only evidence offered for this event is the reading of the supportive texts that, themselves, generate the hypothesis. This renders the argument, by definition, circular.

But, most of all:

b) For it to work, the investigative judgment requires a theology, not of man, nor of angels, but, of extraterrestrials ("unfallen worlds"); i.e., a xenotheology. These xenomorphs, purportedly, are the recipients of God's advance judicial review, because human beings—otherwise the Bible's primary focus—certainly are not.

So, on p. 75 of the aforementioned Study Guide, alternately speaking, perhaps, of angels, the author argues, as a reason for the I.J., "Heavenly beings need to be sure that the saints are safe to save." But he offers no Biblical evidence or support for his point. He just says it.

But here's what's interesting: The fact of these obstacles does not mean that the investigative judgment doctrine is not true. (Indeed, nowhere, here, have I said that it is not.) The I.J. could be, theologically, akin to what scientist Edward Witten once said of string theory: "a part of 21st-century physics that fell by chance into the 20th century."

Perhaps. But if the Bible, and these three evidences, offer no such conclusion, then how can we?