The Limits of the GC's Authority, and Women's Ordination - Part 1 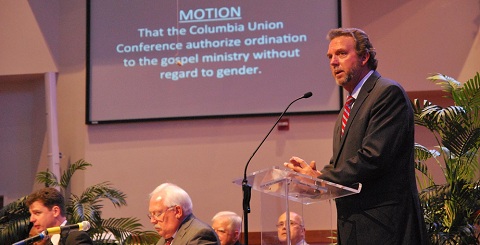 Patterson argued that individual union conferences in the North American Adventist church have the administrative authority to ordain women, as some have now done.

Based on his “Six Points on the Ordination of Women Issue” and “Policy, Practice, Precedent & Perception” papers, Patterson focused on church policies regarding the authority and roles of the local conference, union, and GC regarding ordination. He also reviewed past NAD and GC studies and actions concerning ordination of women from 1950 to 2013; read GC policies of non-discrimination; showed how the 15 GC criteria for ordained ministers do not include gender; emphasized that women’s ordination need not bring disunity to the world church; and drew parallels between today and Peter’s use of Joel 2:28-29 in Acts 11:17 regarding women’s roles in apostolic times. A summary of his presentation follows, in two parts. You can listen to the presentation with Q&A afterward here.

Authority of the General Conference

This being the obvious case, it then needs to be determined just what things are in its jurisdiction and which are not. Though the list is much longer than given here, a few examples will serve to illustrate the point as delineated in GC Policy B 05, point 6.

Authority belongs to each of the four distinct levels of church structure which, as the policy states, is “a realm of final authority.” Thus the General Conference may not act upon issues relating to individual membership. Though in the Roman Catholic Church, the Pope may excommunicate individual members, in the Seventh-day Adventist Church, the General Conference President may not do so. Likewise, the staffing of pastoral positions, as well as conference level employees, is within the authority of the local conference and may not be countered by other levels of the denominational organization. Further, the ordination of ministers is entrusted to the union level of church structure and is not subject to the General Conference. While it is true that the General level does establish the criteria for both membership and ordination, it does not have authority as to who may be accepted as members or who may be employed or ordained as long as they meet the criteria established.

A comment made by Ellen White in 1875 is frequently quoted as indicating that the General Conference is the ultimate authority in all things, but as indicated above, its authority is limited to those areas in which it has jurisdiction. In addition, to fairly assess this 1875 comment, additional statements must also be considered. Following are four such comments that need to be considered:

“When the judgment of the General Conference, which is the highest authority that God has upon the earth, is exercised, private judgment must not be maintained, but surrendered.”  (Letter  to an individual written in 1875 and quoted in 3 T 492).

“The voice from Battle Creek, which has been regarded as authority in counseling how the work should be done, is no longer the voice of God.” (Letter 4, 1896, cited in Manuscript Releases 17:185 & 186).

“It has been some years since I have considered the General Conference as the voice of God.” (Letter 77, 1898, cited in Manuscript Release 17:216).

Addressing this issue in 1903, White observes:

“It has been a necessity to organize union conferences, that the General Conference shall not exercise dictation over all the separate conferences. The power vested in the Conference is not to be centered in one man, or two men, or six men; there is to be a council of men over the separate divisions.”

Her resistance to this centralization was expressed in her opposition to what she called, “kingly authority” which she rejected in the following words:

“In the work of God no kingly authority is to be exercised by any human being, or by two or three.  The representatives of the Conference, as it has been carried with authority for the last twenty years, shall be no longer justified in saying, "The temple of the Lord, the temple of the Lord are we." The men in positions of trust have not been carrying the work wisely.” (Manuscript 26, 1903).

By overstepping its bounds in placing the ordination of women issue before the world church for a vote in both the 1989 Annual Council and the 1990 General Conference Session, as well as in the 1995 session, not only was the clear position of General Conference Policy B 05 violated regarding which level has the authority to authorize ordination, but currently, an attempt to refuse recognition of an elected conference president in a properly conducted conference session because she is a woman, is again an overstepping of the authority of the General Conference, which has no jurisdiction to do so.

Thus the question arises as to whether the General Conference in session has control over issues which belong to other levels of the church, as structured in 1903. And the answer is yes. But it is yes only if the current structure of the church in its four levels of constituency are changed. Thus, before such matters can be addressed at the General level, the structure must first be changed. Matters such as who may be elected and ordained as elders, belong to the local church. And these actions exists in “a realm of final authority” which is out of bounds for other levels. Likewise, the hiring and electing of local conference staff, and the authorizing of individuals for ordination to ministry, remain in the authority of the local and union conference respectively, in “a realm of final authority” as stated in policy B 05.

The risk of returning to the days Ellen White rebuked and rejected in the late 1800s and early 1900s is clear. Thus the purpose and wisdom of distributing responsibility between the four constituent levels becomes more and more clear in the context of attempted usurping of these responsibilities.