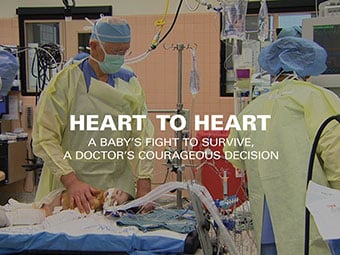 With thousands of channels and exponential hours to fill, today’s television is filled with shows that riff off real life interest and drama. From Iron Chef and The Real Housewives of . . ., to the psychic exploits of a Long Island Medium and the Alaskan crab-fishing drama of Deadliest Catch, TV networks have shown they can attract viewers without spending millions on sets or professional actors.

Most Adventist-produced media, however, is still decidedly studio-bound. Life on the Line, a new drama premiering on American public television April 4, a production of the Loma Linda Medical Center, is doing its part to change that. Promising “Real people, real stories,” it documents the experiences of patients served by Loma Linda University Medical Center, and takes us behind the scenes as doctors work to save and heal. It’s narrated by acclaimed journalist Lisa Ling (National Geographic Explorer, The View).

The pilot episode opens with the story of David, an infant holding onto life while awaiting a heart transplant. We meet David’s parents, and learn that eight years earlier David’s older brother received a heart transplant of his own. The operating surgeon is Dr. Leonard Bailey, a man who made history thirty years ago when he transplanted a baboon heart into Baby Fae. Fae’s story is woven in with David’s, and we meet Teresa Beauclair, Baby Fae’s mother. She remembers herself at 24 years of age, having split with her daughter’s father just two weeks before, learning that there’s nothing doctors can do to save her baby.

We meet Armando de Amaya, Loma Linda’s transplant coordinator, who daily scans the donor bank in search of a heart for David. He notes how public safety measures have reduced the number of vehicular trauma victims who used to serve as heart donors. The program highlights a harsh truth: The only way David will live is if another child dies. A camera follows the transplant surgeon as he tells David’s mother the “very good news”: A donor heart is available, from a seventeen-month-old baby in Texas. Twelve hours later, David is wheeled into cardiothoracic surgery. We watch as the transplant team carries a cooler, looking at first glance like what you’d store soda in for a picnic, from an airport to the OR. On the operating table, surgical instruments swirl with precision around the dark pink heart. Dr. Bailey reflects on the miracle of a transplanted heart’s “first sort of gangbusters contraction. That’s truly the miracle of heart transplantation. That’s where the miracle finally occurs, right there. And the reason I say miracle is because we have no control.”

The Life on the Line pilot is a moving, “you are there” portrait of faith, hope, and dedication. The second of its six episodes takes viewers to Haiti, where Loma Linda doctors served victims of the 2010 earthquake, and further episodes will tell more stories of service and love.

For more information, visit www.lifeontheline.tv. Watch for an upcoming Spectrum interview with one of the Life on the Line directors.

Tompaul Wheeler is a writer and independent filmmaker who has created such documentaries asLeap of Faith: The Ultimate Workout Story. He is based in Nashville, Tennessee.