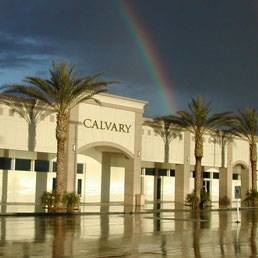 Pastor J. Mark Martin tells Don Barton why he left the Adventist church to start his own ministry.

This is the second installment in a two-part series that looks at former Adventists who have not just left the church, but have embraced ministries in other denominations.  I wouldn’t have written this article if it weren’t for the fact that I knew these individuals personally, as we all studied theology together at PUC in the late 1970s.  I decided to find out why, and how, they could make such a major life change and asked to interview them.

I interviewed Pastor J. Mark Martin, senior pastor of the Calvary Community Church in Phoenix, Arizona, in April 2012. While his name may be familiar to some, I strongly urge suspension of any judgment on him until after reading the interview.

Don Barton: Where did you go to school and how long were you a Seventh-day Adventist minister?

Mark Martin: I attended Pacific Union College and graduated in 1980.  Upon graduating I received a call to be assistant pastor at the Glendale Arizona Seventh-day Adventist Church. I left after serving there as assistant pastor for two years.

DB: What events led to you leaving the Seventh-day Adventist Church?

MM: Studying the Bible and understanding the message of salvation by grace.  The more I studied the more I realized that several of the SDA church’s teachings contradicted what the Bible had to say about God’s grace and salvation through faith alone.

The Arizona Conference offered to send me to Andrews University. I’m not sure of the motive for offering this; I have a strong feeling it was to get me out of the Conference, for at that time local conferences were sending pastors who preached what they called “New Theology” to Andrews where they often dropped their support soon after arriving.

I had already discovered through serious Bible study that the doctrines were incorrect. So consequently I resigned from Adventist ministry.  After resigning, I felt the call of God to teach the Gospel even more strongly.

DB: How did you feel after making the decision to resign?

MM: In a week we went from being loved by 800 people to being shunned. Some people believed we were of Satan.  That’s not an exaggeration at all.  One pastor told his congregation that I was a demon in human form.  Needless to say, the whole thing was not handled very well.   We paid a huge price for our beliefs; there was nothing easy about it.  Both my wife Leslie and I lost our jobs.

Leslie taught at the Glendale Adventist church school and encountered incredible rudeness and hostility.  Some of the kids would say to her, “We don’t have to listen to you, your husband is a bad man.”  Some of them literally took rocks and threw them at her.  We also lost the church culture we had known all our lives.  One thing needs to be very clear: we left only for conscience sake – there were no character issues or any kind of sin involved.

DB: What happened after you left the Adventist Church?

MM: Because I still felt called by God to Gospel ministry, we started Calvary Community Church with a small group of nine people, along with my wife and myself.  For the next nine years the group fluctuated in size from 30 to 70 members. Financially these were tough times.  More than once I thought of giving up, but by God’s grace we persevered in our calling.

DB: How many members do you have in your church today?

MM: The Lord has blessed Calvary tremendously with people who want to hear the Gospel. His hand of favor is obviously on our church. We have about 12,000 members on two campuses. This past Easter we had over 500 commitment cards indicating decisions for Christ and expect close to 700 baptisms by years’ end. We have five services a week: one on Saturday night, three on Sunday, and a Wednesday night service as well.  We have two sanctuaries on the main campus and one at our northwest campus.

I preach in person at both campuses every Sunday and the services are simultaneously broadcast to both campuses and all sanctuaries, linking them together by fiber optics so each group sees the worship service live.  Each sanctuary has its own worship team and live music. No one sanctuary is larger than about 800 seats, so people have the feeling of being in a smaller church. Our vision is to exalt Jesus Christ, to equip His saints and to evangelize His earth.

DB: To what extent is your church involved with missions?

MM: Calvary supports missions and missionaries in Uganda, Ethiopia, southern Sudan, Tanzania and in 13 Asian countries. We support 100 missionaries in India alone!  We have supported work in war-torn Chechnya as well as being substantially involved in work in a country closed to the Gospel – one that we cannot give any details about lest we endanger the lives of those involved.

We are excited about our mission involvement in Honduras. This summer, in less than two weeks, 1,000 people accepted Jesus as their Savior and were connected with local churches.

In Mexico, we are building a theological seminary, still in its early stages, and we’re excited about what the Lord is going to do as pastors are trained in theology and taught how to correctly exposit the Scriptures. In the past few years, people from Calvary have made short-term mission trips to India, Mexico, Honduras, Thailand, Israel, Ethiopia, Eastern Europe, Kenya, Jamaica, Haiti and Alaska.  And this summer two groups will be going to Belize.

We’ve helped start a safe house for abused women and their children in the Phoenix area.

We also care for our members.  We started a food pantry that in the last 15 months dispensed $184,000 worth of food to 585 families; a total of 2,100 people in need.  We believe that we should take care of our own.  Jesus said, “Your love for one another will prove to the world that you are my disciples."

We’re also involved in working with other Christian churches and ministries, from helping with medical bills for those who can’t afford it to donating a property to a local Korean ministry.  In less than two years over a million dollars have been given to missions and outreaches.  I don’t want anyone to misunderstand: Calvary is not a rich church, and this giving is a sacrifice for us in these very difficult financial times.

I’m sharing these things because the Adventist community so often misunderstands and vilifies us.

DB: And what about the seventh-day Sabbath?

MM: We believe the Sabbath is the sign of the Old Covenant and this is clearly taught in the Old Testament.  The sign of the Law is the Sabbath.  Every covenant has a promise, a condition, and a sign that distinguishes that covenant. God Himself predicted a change of covenant with Israel.  He said, “I will make a new covenant with you, not like the one I made with you when I brought you out of the land of Egypt.”

And because we have a New Covenant, the sign of the Old [Covenant] is obsolete as we are told in Colossians and it has been fulfilled in Christ. And it [the Sabbath] was a shadow pointing to Christ.  We don’t live in the shadow anymore because the shadow pointed forward to the finished work of Christ.  God gave us three “remember signs:” Noah and the rainbow, the Law and the Sabbath, and now under the New Covenant it is to remember the Lord’s Supper – the sacrifice of Christ for the redemption of sin.  I do not believe Saturday is the only day God accepts for His people to worship Him.

DB: Is there anything you would like to say to the Seventh-day Adventist Church today?

MM: Be consistent.  If you are going to say you believe in the Bible alone, believe in the Bible alone!  If you say the Bible is your only rule of faith and practice, then you can’t say Ellen White is a continuing source of authority for your church or that she is the divine commentary of the Bible.  Otherwise, she becomes the interpreter [of the Bible] and she cannot be challenged.  If you are going to say we are saved by grace through faith alone then you can’t teach a doctrine that says you are in a judgment of your works going on right now that will determine your salvation – as in the Investigative Judgment.  These are polar opposites.

Final note from Don Barton: Before visiting Pastor Martin, I knew very little about the Calvary Community Church and wanted to see it for myself.  I appreciated Pastor Martin giving me the time to do this interview.  We scheduled it on a weekend where I could observe his church services and also talk to him – even while we were in a vehicle racing over to the second campus for the next service.  I will make only one comment regarding Pastor Martin and his ministry: it is disappointing that a person of his talent and ability could not find a place in Adventism. If he were a young pastor today, I don’t think his views on the investigative judgment and grace would have precipitated him being asked to leave the Adventist ministry.