The Need to be Right 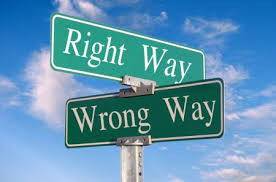 I’ve been an Adventist most of my life and the years are adding up. In that lengthy exposure to the SDA subculture there are many things I like and many I don’t. One of the least attractive has been those church members who seem to have an excessive need to be right. Whether it is in Sabbath School, hallway conversation or online, some Adventists exhibit a low tolerance for what they see as aberrant viewpoints. Often, in my experience, the pushback occurs toward someone who is expressing some sort of “new” idea. It may be a different perspective on something theological or a new way of doing something – like the church service or outreach. But pushback comes, and the underlying justification for criticizing the new often has an element of “protecting the truth”. By that I mean the critics clothe their view in expressions that make it synonymous with God’s view. This may not be overtly done, but the alignment provides a powerful apparent justification – who are you to go against God? And, for the more timid recipient, the conversation is thus aborted. Sometimes for good as the one on the receiving end gets an all-too-clear message that this environment is not a safe place to raise questions. It doesn’t take a lot of this for the questioner to never return.

Now perhaps I have just traveled atypical roads in my Adventist experience. Your “mileage” may vary. And, to the extent this social phenomenon is real I don’t think it is at all limited to Adventism. But I do think there are dynamics within Adventism that make us more vulnerable to the being right disease, however often it may occur.

Adventism has a unique message. And one of the sub rosa parts of that message is that this church is right. We have figured out prophecy and thus have a clear roadmap of the end times. We also find ourselves playing a front-and-center role in the wrap-up of world history. So, if you join us, Mr. or Ms. Potential-Convert, you will have the satisfaction of being part of a group with superior knowledge and you will play a major role in the most important drama ever. Quite a boost to one’s self esteem.

Now I want to be clear that, however negative the above paragraph may sound to some, I am not expressing an opinion about whether Adventism is correct or not about its eschatological interpretations. What I am describing is the potential to be also transmitting (however perhaps innocently) an invitation to evangelistic prospects that is less noble in its appeal. And acceptance can occur by people because they see an attraction the evangelist might not have intended. Being part of the in-crowd.  And a sort of neo-Gnosticism.

However it may infiltrate, some Adventists appear to me to have been powerfully attracted to being right. Thus it is understandable that alternate views disrupt this satisfaction. And the longer the rightness continues the harder it is to concede the possibility that you might have been mistaken all these years. Suppose you had been evangelized into Adventism, say, 40 years ago. And you were taught that some doctrine X was central to Adventism. You were persuaded and for all this time have cherished X as highly significant to your faith. But now there comes along people who question X. How might you feel about that? All these years – have you believed a lie? It is understandable that in such cases a possible response is to reject any reconsideration of X – sometimes by shooting the messenger. And, I hasten to add, this can occur whether or not X is actually true or actually false. The human dynamics would not necessarily be any different.

Ironically, I think there is something appealing about admitting that we don’t know. Especially because that is far more often true in life than false. Sometime back on the Spectrum website Adventist educator Karl Wilcox made the following comment:

Years ago, when teaching the 'Bible as Literature' at Newbold College, a student asked me a tough question about the book of 'Job'. Now, 'Job' is a specialty of mine, and I had just published a very original and 'in your face' challenge to some 150 years of 'Job' scholarship-- I was at the top of my game (not that it really matters that much). Everything in me wanted to offer some definitive 'answer' to her question, but, at the same time, I heard the Holy Spirit say, "Karl, you do not have an answer to that question, so why don't you just say as much?". Grace won out, and I simply told her, "I'm sorry, I do not have an answer to that question-- ". Years later, I got a letter from her in the post. In the letter she explained to me that she came to Newbold College as an agnostic. When I admitted to her that I could not answer her question, she said that a light dawned in her mind, and from that time she had been a Believer. She explained that she had been convinced that no religion could be true which 'had all of the answers'. When I failed to answer her question about 'Job', she got the 'answer' that she needed. People should not believe us when we pretend to have answers to all of their questions. We should not be 'witnessing' to our own hubris. When we stop doing that, God can do real miracles.

On December 6, 1273, Thomas Aquinas decided to stop writing. He was the Catholic Church’s go-to guy – on theology, philosophy, ethics. He had written about a hundred works to that point. But, as the story is told, on that day he had a profound experience during a church service in Naples. When friends urged him to continue his work he replied “I cannot, for everything I have written seems to me like straw.”

An honest Christian wants to be right. As I write this essay I want to say something both helpful and true. But all of us, however honorable our intentions, see though the glass of reality – darkly. More “straw” than we wish, and sometimes more than we want to admit.

A group like Adventists certainly can have substantial truths without portraying themselves and their message in a Gnostic-like manner. But it takes awareness of human nature to minimize this downside and continually remind ourselves of the need for genuine humility as we seek to understand and communicate.