Build Your Own Peace Week

Build Your Own Peace Week 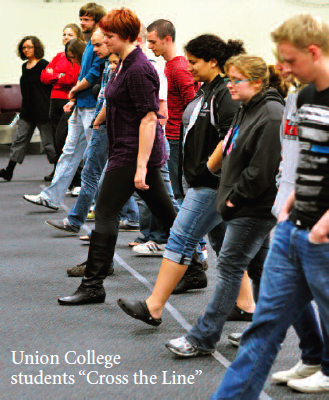 Chris Blake wrote this article for the Journal of Adventist Education, published this summer, about practical ways students can work toward becoming peacemakers. Look at what Union College students are doing. Studying peaceful methods to resolve conflicts - from the personal to the global - can be a useful exercise for all of us.

One week. Every Adventist school. Every year.

This call to action is laid out with astounding directness in an official Seventh-day Adventist Church statement entitled “A Call to Peace.”[i]

“The Seventh-day Adventist Church operates what may be the second-largest worldwide parochial school system. Each of its more than 6,000 schools, colleges, and universities is being asked to set aside one week each school year to emphasize and highlight, through various programs, respect, cultural awareness, nonviolence, peacemaking, conflict resolution, and reconciliation as a way of making a specifically ‘Adventist’ contribution to a culture of social harmony and peace. With this in mind, the Church’s Education Department is preparing curricula and other materials to help in implementing this peace program.”

Though that curricula has not seen daylight, the call endures. From its inception, Adventism has taken peacemaking seriously (see 'People of Peace' image below). The spirit of peacemaking is simple: We must be followers of Jesus. 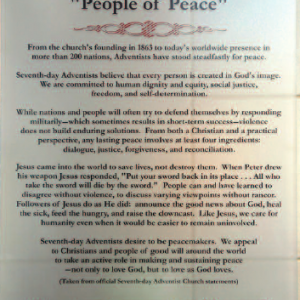 Not surprisingly, misinterpretations of peace abound—so education remains paramount. Peacemaking is not principally a passive enterprise, just as light is not merely the absence of darkness. The difference between a peace lover and a peacemaker is similar to the difference between loving money and making money.

Union College’s second annual Peace Week, held April 17-24, 2011, was designed to turn minds toward existing conflicts—both on personal and societal levels—and to study peaceful methods to resolve them. “Helping people learn to become better at listening, problem solving, and staying aware of issues around the world and how they are a part of it is the purpose of Peace Week,” said Kourtney Shoemaker, a member of the Conflict and Peacemaking class that helped plan the first Peace Week.[ii]

“Crossing the Line,” a dialogue activity, took place on Monday. As students entered Woods Auditorium, Kelly Phipps, a junior communication major, directed them to gather on one side of the room. Participants were asked to follow instructions in silence, paying attention to feelings that arose. “Notice who is with you. Notice how it feels to be where you are.”

In addition, participants were asked to respect one another by maintaining confidentiality with regard to this activity. After explaining the rules, Phipps read aloud one statement at a time.

Any participant who heard a phrase that was personally relevant could choose to step across a strip of duct tape 15 feet away. She began, “Cross the line if . . .”

“You were raised by a single parent.”

“You had an imaginary friend as a child.”

“You are of multi-ethnic heritage.”

“You wish you were out of school right now.”

“You do not consider yourself to be a member of any religion.”

“Someone in your family is gay/lesbian/bisexual/transgendered.”

“You have a visible or hidden physical, learning, or developmental disability or impairment.”

“You speak more than one language.”

“You have ever been dangerously or continuously sick.”

“You have ever used food stamps.”

“You have been discriminated against because of who you are.”

“You have cried in the past month.”

These and more statements addressed depression, sexual orientation, and racial prejudice—topics that often drive people apart and stir up conflict. However, knowing this was a safe place, a true sanctuary, students stepped forward without hesitation. The honest dialogue, in word and action, paved a path toward acceptance and unity in the debriefing afterward.

When Phipps addressed those who had previously used food stamps, a shocked Bernice Tumangkeng, a senior nursing and international rescue and relief major at Union College, watched several schoolmates cross the line. “You don’t know what’s going on,” she admitted, “so when you learn that other people are fighting battles, you get a sense of humanity, and you want to help carry those burdens.”

When Tumangkeng was asked to find a peace role model, Mohandas Gandhi, Mother Teresa, and Martin Luther King, Jr., sprang to mind. Tumangkeng chose Jesus. “Even if I wasn’t a Christian,” she said, “that is the Person I would be following. Like Jesus, I want peace to be the root of my actions, but also the result of my actions.”

For many students, Peace Week was another positive step in their education. “Service and being nice to everyone is not enough,” said Phipps. “We must take time to educate ourselves about issues around us and to seek a true understanding. Only then will true peace be achieved.”

What practical essentials are needed to “set aside one week each school year” to emphasize peacemaking?

1. Acknowledge that peacemaking is vital to education, to Christianity, and to the world. Without a genuine belief in the importance of peacemaking, any dedicated time will fail to retain the requisite urgency to sustain creative viability. The Bible, the character of Jesus, official Adventist statements, and today’s newspaper headlines help provide the foundation for sustained action.

2. Encourage students to take major roles in planning and administering Peace Week. Students learn best by doing. Lao Tsu observed, “But of a good leader . . . when his work is done, his aim fulfilled, they will say, ‘We did this ourselves.’” [iii]Jesus employed this principle often with His disciples: “The Lord appointed seventy others, and sent them on ahead of him, two by two, into every town and place where he himself was about to come” (Luke 10:1, RSV).[iv]

3. Use one day to focus on each of these topics: credit dialogue, justice, forgiveness, and reconciliation. Union College follows this format (adapt to fit your situation):

Sunday: Resurrection Day (Easter)—when possible, be gin with the liberating action of the Prince of Peace. On this day Union College has also held a benefit fundraiser for a worthy cause.

Monday: Dialogue activity. Create opportunities for everyone to listen. Focus on active listening—paraphrasing—and on inclusive behaviors. For example, consult Google for a “Crossing the Line Activity.” Provide a list of memorable quotes on the topics as a “takeaway” for each day’s emphasis.

Tuesday: Justice activity. Many excellent articles and films— particularly documentaries—can be used to highlight injustices locally and worldwide. Be certain to provide opportunities for students to address the injustice. For example, have a staff member play the part of a prisoner of conscience—complete with meager food and furnishings behind duct-tape bars—and supply Amnesty International Urgent Actions for students and teachers to sign.

Wednesday: Forgiveness activity. Distribute free carnations for students to give to someone as they ask the person for forgiveness. Be certain to qualify what forgiveness is and is not (e.g., releasing from our judgment entirely, not condoning the wrong). Carrying an unforgiving attitude harms us. As author Anne Lamott points out, “Not forgiving is like drinking rat poison and then waiting for the rat to die.”[v]

Thursday: Reconciliation activity. Read brief excerpts of how conflicts have been reconciled through peaceful means (civil rights movement in the United States, the People Power Revolution of 1986 in the Philippines, Hungary’s Peaceful Revolution in 1989, the non-violent appeasement in Northern Ireland). Role-play various ways to achieve interpersonal non-violent reconciliation, even with bullies. Find some fun ways to infuse into the activity.

Saturday: Focus the sermon and liturgy on peace and peacemaking possibilities. Then use the Sabbath as it was intended, as a day of liberation. “If you had known what this means [on the Sabbath], ‘I desire mercy and not sacrifice,’ you would not have condemned the guiltless” (Matt. 12:7, NKJV). Spread peace in active, merciful ways.

4. Foster a climate throughout the year that nourishes peacemaking. Build a consensus of respectful interaction—student to student, student to staff, and staff to staff. Be intentional about this on a daily bases. From this soil will sprout the fruits of peace you seek.

Chris Blake, M.A., is Associate Professor of English and Communication at Union College in Lincoln, Nebraska.

This article was originally published in the Journal of Adventist Education, Summer 2013, Vol. 75, No. 5, and is republished with permission.