The Ear: Roy Branson on Sabbath School as Gemeinde 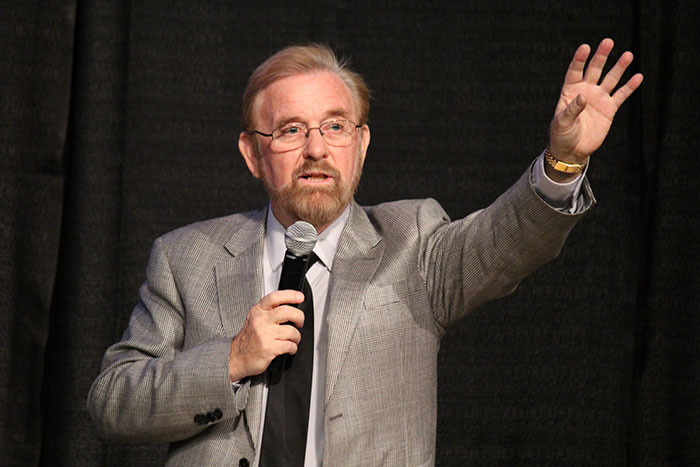 It’s no stretch to say that Roy Branson is a legend as a Sabbath School class leader.   In Takoma Park, Maryland, the class at Sligo Church that he inspired and co-led over decades still meets.  Though he moved to the west coast about a decade ago, long-participating members still associate the class with his name.

Branson’s gifts as a teacher blossomed early.  After completing a doctorate at Harvard University, he came to the Seminary at Andrews University.  His reading lists and seminar-style pedagogy blasted a hole in the long-standing cell of Adventist intellectual inwardness.  Many students simply loved what he was doing, and perhaps no Seminary teacher, in so short a time, influenced more students into graduate study in theology, ethics and history.  He came to Andrews in 1967, and because he was as controversial as he was engaging he was gone in just a few years.  He has spent much of his adult life outside of employment in one of the church’s institutions.

Branson worked at, and was long affiliated with, the Kennedy Institute of Ethics at Georgetown University.  For more than 20 years he edited Spectrum magazine.  In the mid-1990s he was invited to teach at what was then Columbia Union College (now Washington Adventist University), where he established the Center for Law and Public Policy, a continuation of what had been the Washington Institute.  In his role as Director he shaped an Adventist advocacy that helped bring a wide range of religious groups into the then-developing tobacco control movement.

Now Branson is with the School of Religion at Loma Linda University, where he has been Associate Dean and Director of the Center for Christian Bioethics.  At Loma Linda he started another class—“from scratch,” as he says—and it now meets in the University’s Centennial Complex on Sabbath morning.  The room there is a well-lit amphitheater.  He calls it “quietly embracing.”  About 30 attend each week.

Branson is a regular walker.  And as a talker, he may have no peers.  His curiosity about, and passion for, a deeper take on Adventism is legendary.  He engages conversation partners with irrepressible abandon.

Here are his thoughts about the church at study:

Question: For decades you’ve led or co-led a Sabbath School class—first, at the Sligo Adventist Chuck and now in Centennial Hall at Loma Linda University.  Why does doing this matter so much to you?

Answer:  A church is many things, including memory, worship, belief, institutions, mission.  Sabbath school classes emphasize the church as community: fellowship, face-to-face contact, sharing the ups, downs, tragedies and exaltations of a week.  The Germans have a word to describe a relatively small fellowship community—gemeinde, as distinguished from gessellschaft-—an organization, corporation, institutional structure.  I admire and respect the church as a gesellschaft, organized to accomplish great deeds with and for humanity.  I cherish Sabbath schools as gemeinde, allowing us to both bask in the conversation of and be energized by people we know well enough to admire—most of the time.

Question: As I recall, you host, and only sometimes teach, as opposed to always teaching yourself.  That must relate to your sense of what makes a great Sabbath School class.  So what are the keys, do you think, to a class where conversation flourishes and members return again and again?

Answer: Some great Sabbath School classes have been weekly lectures.  People have been imprinted for the better by hearing a thoughtful, articulate Adventist thinker exploring a perspective on scriptures, Christianity, Adventism.

Much of my life I have lived in urban areas with significant numbers of Adventists.  I look forward to hearing from Adventists, including dedicated students of all ages, share their thoughts on topics that they are studying and writing about.  Having a variety of speakers of all ages and some diversity of outlook serves to stimulate thinking on a greater range of topics than listening to one person all the time.

Question: How, if at all, do you take seriously the church’s official study guide (the quarterly)?  Explain your philosophy regarding content, or topics, that your class takes up?

Answer: The topics typically rise from the Bible, Christian faith through the centuries, or Adventist heritage.  Some examples are:  “Other Women in the Bible” (for example, Martha); the “Three Faces of Isaiah”, “Paul, We Hardly Knew You,” “The Early Church Councils,” “Minor Prophets of the New Testament.”  I appreciate hearing lawyers, English and History professors, as well as research in religion from graduate students and young professors passionately committed to exploring topics I know little about.

As for the quarterly, I have devoted weeks to the topic of the Sabbath School Quarterly when it has focused on a book of the Bible.

Question: You once surveyed your class members (at Sligo) on their favorite and least-favorite books of the Bible, and then did a four-part series on the books members said they liked least.  Do you still, now and then, do a series of sessions on a topic?  Why?

Answer: Yes, not long ago, we spent weeks looking at the prophets.  Members of the class devoted the summer to studying “Compelling Moral Visions,” starting with the New Testament and continuing to past Adventist thinkers and on to the present day. We spent most of another quarter looking at the Christian Church of the 4th Century—now often described as Late Antiquity.  As Peter Brown demonstrates in his Through the Eye of a Needle, it is truly instructive to learn how devoted Christians responded to the fact that a growing number of them had been or were becoming part of the super-rich of the Mediterranean world.  How to be faithful?

Why do a series?  Because one can go into a single topic in greater depth, while hearing from diverse disciplines and points-of-view.

Question: How do you construct community—the sense that members of your class constitute a mini-Christian family?

Answer: Don’t take breaks—ever.  And that’s only possible if you share the responsibility of teaching widely.  The class is always there for the members of the class—as well as for the congregation and visitors.  Develop a culture of courtesy; be a place where people both talk and listen to each other—converse, not deliver and endure monologues.  And of course share tragedies behind the scenes and sometimes, if surviving members wish, within the group.

Read an interview with Roy Branson from 2008 here.