The Ear: Fritz Guy, Adventist Embodiment of Candor and Passion

The Ear: Fritz Guy, Adventist Embodiment of Candor and Passion 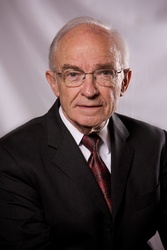 In Adventism, Fritz Guy occupies the leading edge when it comes to questions of faith and science.  He wrote, with Brian Bull,  God, Sky and Land: Genesis 1 as the Ancient Hebrews Heard It.  Earlier, he addressed the why and how of Christian intellectual responsibility in Thinking Theologically: Adventist Christianity and the Interpretation of Faith.

As much or more than any Adventist theologian, he has explored difficult terrain — creation is one example; sexual orientation another — and has spent much of a lifetime reminding his church of such remarks from Ellen White as these:

A 1952 graduate of La Sierra College, and still (!) a teacher at what is now La Sierra University, Guy entered pastoral ministry the year of his graduation and returned to it in 1984, when he began service on the staff of the Loma Linda University Church.  In the interval between, he was an associate editor of The Youth’s Instructor and a teacher of religion at both La Sierra and at the Seventh-day Adventist Seminary at Andrews University.  In 1971 he completed a doctorate in theology at the University of Chicago Divinity School.

His latest teaching stint at La Sierra began in 1990.

Here is some of his perspective on the work of Adventist theologians:

Question: What theologians say or write may seem abstract, theoretical. How do you connect your work with the actual battle front of human existence, where we confront not only dreams and joys but also disappointments and extreme suffering?

Answer: Theology asks not only “What do we believe?” and “Why do we believe it?” but also “What difference does it make in the way we think and live?” The heart of the Christian “good news” is that the character of God is infinite love — that is, love that is universal, unconditional, and unending. This ultimate truth becomes the spiritual center of our lives, the criterion for all our decisions and the context for understanding everything that happens. Although there is no truly satisfactory solution to “the problem of evil,” knowing that God suffers with us enables us to cope with evil — both theologically (in general) and spiritually (when it touches our own lives).

Question: People expect that as an Adventist Christian you will take Scripture as the highest written authority for your work. How do you respond when the Bible seems to have various perspectives on a topic — on, say, marriage, the disciplining of wrongdoers, the use of violence or some other matter? What principle of biblical interpretation helps you make sense of all this, and come up with insight applicable to Christian life today?

Answer: Scriptural authority resides in the Bible as a whole — that is, in what Ellen White called its “underlying harmony” (The Great Controversy, vi). The heart of Scripture is the revelation of God in Jesus of Nazareth — for which all preceding Scripture is preparation and all subsequent Scripture is interpretation and application. All of Scripture originated in, and was initially addressed to, specific historical and situational contexts, which differed significantly from each other and even more from ours. In an important sense, reading the Bible is like reading someone else’s mail. Understanding as well as we can what the various messages of Scripture meant to those who first heard them, we try to determine the overall theological, spiritual, and moral principles they convey, and then apply these principles to our own situations (see Thoughts from the Mount of Blessing, 1).

Question: Many church members believe Adventism is dealing with an identity crisis, driven, perhaps, by anxieties concerning our eschatology or our relationship to scientific knowledge. Those who read widely and otherwise interact with the wider intellectual culture see our church going through intense self-analysis about who we are and what our role is. Where do you think this discussion ought to take us?

Answer: An Adventist identity crisis is nothing new; so George Knight’s book on the development of Seventh-day Adventist beliefs is appropriately titled A Search for Identity. The best possible outcome of the current discussions on the doctrine of creation, the role of women in ministry, same-sex relationships, the shape of the historical future, and other subjects will include (1) recognition of and respect for a diversity of Adventist views, (2) continuing conversation in good faith, and (3) gradually increasing consensus.

Question: You belong to the Adventist Church; you were born into a churchmember’s family. But why do you remain Seventh-day Adventist? In a conversation with, say, your child or a close friend, what would you offer at the most important reason?

Answer: I am an enthusiastic fourth-generation Seventh-day Adventist. On the basis of the available evidence, I am convinced that for me the best spiritual and theological home is progressive Adventist Christianity, with its interest in healthful living, intellectual excellence, practical goodness, international mission, and ongoing theological discovery. As our prophet said, “There is no excuse for anyone in taking the position that there is no more truth to be revealed, and that all our interpretations of Scripture are without an error” (Counsels to Writers and Editors, 35). The great Adventist idea of “present truth” means that we can be continually enriched theologically and spiritually by our Christian and Adventist past without being confined to it. What more could one want?