The Genesis Account: Six Hebrew Words Make All the Difference 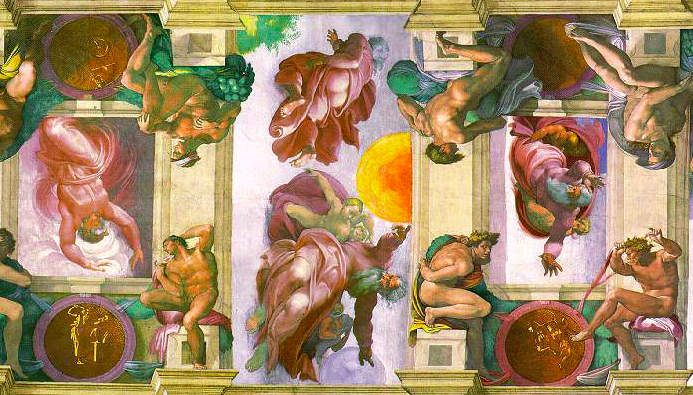 Why did the translators of Genesis choose the English words that they did? What might their choices have done to the Genesis story? We (within the limitations of a short essay) would like to exam­ine what English Bible translators have done down through the centuries and, more im­portantly, what we think they could and ought to do today—ifthey are to avoid mislead­ing those who read Genesis 1 in 2012.

But fear not! We will look at only six Hebrew words—five nouns and a verb—six words that have the power to transform this familiar Bible account. In translating Genesis we have picked other English words—perfectly legitimate alternative English words—so that the Genesis crea­tion account now describes the coming-to-be, not of the universe we know, but of a world that is markedly different from the one in which we presently live. It is, however, the world that was familiar to the ancient Hebrews for whom the inspired account of Genesis was originally com­posed.

Following each of the six words below is a listing of the ways each Hebrew word has been translated, beginning in 1530 with Tyndale’s translation of Genesis.

Although shemayim is a plural form, its meaning here is singular (like “mathematics” in English)—as reflected in the Greek translation known as the Septuagint, which uses the singular form oura­non. For Tyndale in his time and place to translate shemayim as “heaven” was entirely appro­priate, but that is no longer the case. In 1530 shemayim meant the visible dome of the sky in which the sun was embedded. That dome rotated around the earth carrying the sun by day and the moon and stars by night. For us, however, “heaven” often means “cosmos” or “astronomical uni­verse.” Since neither the author of Genesis nor any other human being up to Tyndale’s time (in­cluding Tyndale himself) was aware of what we mean by “universe” it would seem prudent to select another word, from the list above or elsewhere. We propose “sky,” since that is surely closer to what the ancient Hebrews—those who first listened to the Genesis account—pictured mentally.

To follow Tyndale and translate ’eretz as “earth” is to mislead the modern-day reader into pic­turing “Planet Earth,” for this is what the word “earth” inevitably conjures up for us in the con­text of a cosmology. As before, what Tyndale could get away with (without doing injustice to the Hebrew text) is no longer possible for us. “Land”—the most frequently used English equivalent for ’eretz—is much less likely to mislead. This, however, is not merely land as in real estate, but also (and often) land as in “promised land” or “land of Israel” (’Eretz Israel is now the state of Israel).

As we have seen, shemayim and ’eretz—the English words used by Tyndale (and most of his successors)—have come to mean quite different things over the past half-millennium. The Genesis “earth” has become “Planet Earth”; the Genesis “heaven” has become “universe.” In translating raqia we confront a different but equally difficult challenge. What the word still meant when Tyndale was deciding how to render it in English was a rigid (probably metallic) dome-of-heaven, which surrounded and protected us. He thought the sun and the moon to be embedded in the firmament along with the “fixed” stars, and that the whole assemblage rotated around an axis that pointed toward the North Star. We no longer believe that to be the case. In fact, we don’t believe there ever was a “firmament.” Faced with this situation today, translators have gone in two directions. One group, unwilling to translate the Hebrew as it reads, has trans­lated raqia as “expanse,” fully aware that the average reader will interpret “expanse” as “atmos­pheric expanse” (which does exist but which the Hebrew does not support at all). The other group of translators has translated raqia “dome” or “vault,” not worrying about the fact that space exploration has found no evidence of such an entity.

Therefore: raqia = vault (not “firmament,” and certainly not “atmospheric expanse”).

With ‘ereb the translators’ problems continue. The problem arises because of the unique role that ‘ereb plays in the Genesis account, repeatedly associated with boqer, “dawning.” The historically dominant KJV translated this association as straightforward addition: evening plus morning equals “day.” However, the Hebrew text actually says that there was evening; then when light displaced the darkness, “day” came to be. This arrival of light, because it was the first time light had come-to-be, was “day one.”  There will soon be “a second,” “a third,” etc., day, as reflected in NRSV, NIV, and other recent translations. Taking note of the immediately preceding explanation that “God called the light ‘day’ and called the darkness ‘night,’” a more appropriate interpretation of the text as the author verbalized it and the ancient Hebrews heard it is that the “darkness” was not an intrinsic component of the day but a preceding “non-day”. It did not merit God’s approval as “good.” In other words, it was the dawning, not the darkness, that inaugurated the day; the darkness was not the first part of each day, but rather the separation between the days. This understanding of the text is confirmed by the fact that, despite frequent claims to the contrary, the day for the ancient Hebrews did begin in the morning (see Gen 19:33, 34, Judg. 19:9, 1 Sam. 19:11). It was not until the intertestamental period that one day each week—the Sab­bath—began at sundown. So ‘ereb meant something like “gathering-darkness” or “on­com­­ing night,” connoting the danger and fear that accompanied darkness in a world lit only by candles.

Boqer, in contrast to ‘ereb, means not only morning but often, in Scripture, connotes the relief and joy accompanying the daylight that conquers the darkness.

Wahayah is a compound Hebrew word combining (1) a third-person singular form of the verb “to be”—was, came to be, there was, there came to be—with (2) the ubiquitous conjunction “and,” which could mean “now” (in a logical rather than chronological sense), or sometimes nothing more than that the speaker is continuing (something like an “uh” or “um” in English speech). In this latter case it is often left untranslated.

With wahayah we come to the word that relates ‘ereb to boqer. Though it is rarely done, there is no inherent reason why the compound wahayah cannot be translated one way in one phrase and differently in the immediately following phrase if the change more clearly conveys the meaning of the original text. Thus we suggest “There was gathering-darkness; there came to be dawning, day one.” With such a translation the Genesis text finally makes sense. Whereas the influential KJV, “and the evening and the morning were the first day,” seems (mistakenly) to include “darkness” as a constituent part of the “day”), that day-initiating-all-days was preceded by darkness domi­nat­ing everywhere; it was constituted by God’s glorious light every­where.

“To begin with, God brought into existence the sky and the land. Now [as for] the land, [it] was without form or function, darkness covered the water, and God’s Spirit hovered over the surface of the abyss. God said, “Let there be light”; light came to be, and God saw that the light functioned well. God separated the light from the darkness, and named the light “day” and the darkness “night.” There was gathering-darkness; there came to be dawning, one [Creation]-day.

“God said, “Let there be a vault within the water, and let it separate the water.” God made the vault and separated the water under the vault from the water above the vault, and thus it came to be. God named the vault “sky.” There was gathering-darkness; there came to be dawning, a second [Creation]-day.”[1]

With this translation, few modern readers would mistake the text for anything other than what it is—an explanation by and for ancient Hebrews. It speaks in language that the first hearers readily understood: their home, their world of “sky” and “land” had come into existence by the will of a transcendent Creator. We, with thousands of years of ac­cu­mu­lated information (though not necessarily greater wisdom), in­ev­itably use quite different lan­guage. But the inspired—and inspiring—truth is just the same: our plan­e­tary home, attached to an unspectacular star in a corner of a galaxy we call the Milky Way, came into existence by the will of a transcendent Creator.

Further—and much more important than any of our modern cosmological insights—through the subsequent his­tory of the Hebrews and especially through the life, death, and resurrection of Jesus of Nazareth—who is for us the Christ, the Messiah, the Anointed One, the supreme reve­la­tion of the relation­ship of the Creator to the creation—we know that the transcendent Crea­tor is also transcendent love.