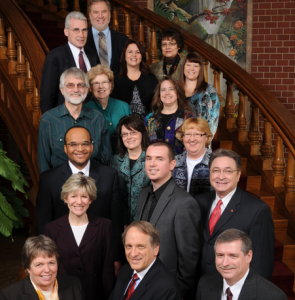 Members of the Mid-America Union Conference Executive Committee voted March 8 to ordain women in ministry. It is the first union in the North American Division to take such a step.

The vote came at a regularly scheduled meeting of the committee; however the action taken was not originally on the agenda, according to President Thomas Lemon.

In November 2011, the committee had voted to support the decision made by the North American Division Executive Committee to allow ordained/commissioned ministers to become conference presidents, an action known by the policy it addressed E-60. On March 8, Lemon was reporting to the committee what had taken place at the Division over the past two months in which the vote on the E-60 policy was rescinded, because the Division received legal advice that the action was contrary to General Conference Policy. And, given that the Division has no separate constituency, it did not have the authority to vote such an action.

However, union conferences do have constituencies, thus they are able to vote on an action for their territory.

In an interview with Spectrum, Lemon said, during his report, “one of the lay people on the [Mid-America Executive] Committee commented that this issue will never be solved until we ordain women.” And with that a simple motion was drafted and voted unanimously: “It is voted to support the ordination of women in the Mid-America Union.”

All the members of the Executive Committee (except one traveling conference president) were present for the voice vote. Lemon said that he has never heard such a loud “Aye” vote.

After the meeting Lemon notified North American Division President Dan Jackson and all the other union conference presidents of the Mid-America vote.

While Mid-America does not presently have a female candidate waiting to be ordained, Lemon says that when the time comes they will be ready.

“Nobody planned for this,” said Thomas L. Lemon, president of the union. “Without any expectation, the subject of ordaining women came up. In the ensuing discussion a consensus formed that gender should not disqualify any future candidate recommended by local conferences for ordination. The committee also recognized the authority of the world church and the need for harmony across the various administrative levels of the Seventh-day Adventist faith community."

According to Elder Lemon, this policy will be implemented in the following way.

“One of our six local conferences may at some point vote the recommendation of a woman for ordination. The Mid-America Union Executive Committee will then evaluate the candidate on her own merits, without prejudice regarding gender, when deciding for or against ordination.”