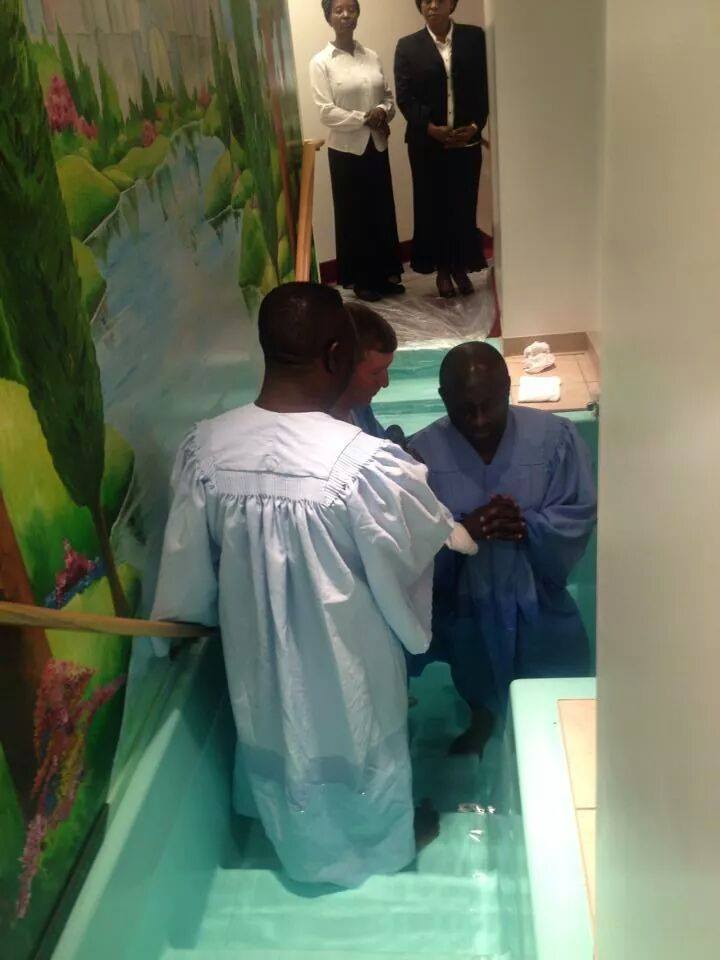 Samuel Koranteng-Pipim was re-baptized last Friday, June 20, at the Columbus Ghanaian Seventh-day Adventist Church in Columbus, Ohio, three years after his ministry for the church was terminated.

Pipim, a widely-traveled speaker and writer, resigned his ministerial credentials in May 2011, and was disfellowshipped by his local church in Ann Arbor, Michigan, in June 2011, after what he termed a “moral fall.”

Two years ago, Pipim’s Ann Arbor Church cancelled a scheduled re-baptism for Pipim the day before it was to take place in June 2012, after church pastors were made aware of further sexual encounters, which Pipim confirmed.

Pastor Dan Hall, from the Griffin Hilltop Church in Georgia, flew to Columbus to perform the re-baptism last week. Hall was the pastor at Ann Arbor in 1999 when Pipim was sent to help the church start a campus ministries program at the University of Michigan, and subsequently became good friends with Pipim.

Other church members, including elders, from the Ann Arbor Church, traveled to Columbus for Pipim’s re-baptism last Friday.

The local church members were all very excited to see someone they know and love going into the baptismal tank, someone who attended the baptism said. A video of the baptism posted on Facebook, including a short statement by Pipim in which he refers to losing the road three years ago, is punctuated by loud amens and affirmations.

Pipim had asked Hall to do the baptism.

Hall says there are “a lot of people upset with me” because of his decision to re-baptize Pipim.

“I have done what I can to follow up, I have asked the right questions, I have got documentation,” Hall said. “In our discussions, I have had no trouble putting his feet to the fire. . .  I did the best I could do to be accountable. . . I thought about it. I prayed about it.

We are close to Jesus’ coming - if he isn’t baptized, where does that put him?

God knows my heart. Can I sleep at night? I sleep very well.

Will he stay faithful? I don’t have a clue. Or, for that matter, for anyone that I baptize. If he wasn’t honest with me, that is his problem.

The guy messed up multiple times. But I don’t see anything in the Bible that says to keep someone out forever.

How much time has to pass? At some point, we have to have reconciliation and restoration. (See 1st and 2nd Corinthians.) We have a Biblical model for this.

Pipim, originally from Ghana, earned his PhD in systematic theology from Andrews University and helped to create CAMPUS (Center for Adventist Ministry to Public University Students) and GYC. Pipim is a prolific author - according to his website, he has written 16 books. Pipim is known for his conservative views on topics including women’s ordination, church worship style, and evolution, among other things. His website includes an index with all of this articles on a range of contemporary issues, arranged by subject.

According to his website, Pipim has not stopped working, despite the fact that he can no longer be in denominational employment. Pipim is “the Director of the EAGLES and ANANSE Centers for Leadership Development. He also promotes excellence and 'mind liberation' as the basis of transformational social change on the continent of Africa,” his site says. He has written several books in the last two years, including one called “Six More Chances.”

Pipim is revered in Ghana, and other parts of Africa, and his Facebook page is filled with messages of support this week after Pipim posted one of his regular “Thought Nuggets,” this time referring to the story of the prodigal son, and saying:

Don't give up! Don’t stay down! Keep getting up! If there’s anyone that can help you handle your failure well, God can. He’s done it for me. He can do the same for you as well. Restoration? You also will return, “safe & sound”!—

Jennifer Jill Schwirzer, a licensed professional counselor, is one of several who have vocally opposed Pipim’s re-baptism. Schwirzer was assigned to counsel a young woman in Botswana, called pseudonymously Nandipa — the one Pipim had sex with against her will (or a “moral fall”) while he was on a trip in 2011. (Read an interview with Schwirzer here.)

After learning of two further victims, with a "pattern of astonishing similarities" between the cases, her “conviction that Pipim was a pathological, serial sex offender, deepened.” Schwirzer released a three-page statement yesterday (Thursday) detailing why she believes Pipim should not have been a candidate for re-baptism.

The reason for my opposition to Samuel Pipim’s rebaptism has nothing to do with being judgmental or unforgiving or wanting to “cast the first stone” and everything to do with wanting to protect the integrity and reputation of my church, and protect the purity of young women the world over (for he travels internationally). The world is watching us. They will not fault us for perpetrators in our midst—all churches have them. They will fault us for loose dealings with them and for turning a blind eye to evidence that they are an ongoing threat.

Samuel Pipim has never confessed the abuse detailed above. [Schwirzer's statement includes the timeline of the case as she knows it.] He confessed a “moral fall” in May of 2012, but apparently only after knowing he’d been caught. He thus gave the impression of a one-time “affair.” The careful research several of us have done has unearthed a much more troubling story of serial abuse of the vulnerable.

Apparently, there were several letters that went between the pastor in Ann Arbor (Christien Hodet, who has been pastor there for less than a year) and the pastor of the Columbus Ghanaian congregation (Isaac Boateng), before Pipim’s re-baptism in Ohio.

Hodet told Boateng, the pastor in Ohio, that the Ann Arbor church members and leaders were divided about the correct course of action. But Hodet said he believed the right thing for Pipim to do would be to stay out of the spotlight, let more time expire, and let trust rebuild. Hodet said that he could not re-baptize Pipim with a clear conscience.

Hall did discuss the re-baptism with the president of the Georgia-Cumberland Conference (where he is a pastor), Ed Wright, who cautioned Hall but did not specifically instruct him.

On September 12, 2012, a statement from the Michigan Conference was sent to the leadership of North American and World Divisions, including the unambiguous advice:

Because of our expanded knowledge of Pipim's moral failures we strongly advise our colleagues, in and beyond our territory, to not support Samuel Pipim’s ministry such as speaking invitations, the use of his materials or any ministry activity. We feel these limitations are important for the physical and spiritual safety of church members and also vital to best facilitate his own spiritual/moral recovery. We pray this notification will be useful should anyone in your field of responsibility consider inviting Dr. Pipim for any speaking or leadership event.

Pipim has not responded to our questions or requests for comment, but he wrote "An Answer to Everyone: A Response to False Accusations" in May 2012 as he defended himself at a church board meeting, then made it public on his website. (Read the June 6, 2012 Spectrum story about the statement and more here.)

UPDATE June 29, 2014: See Pipim's statement about his baptism just posted on his website.