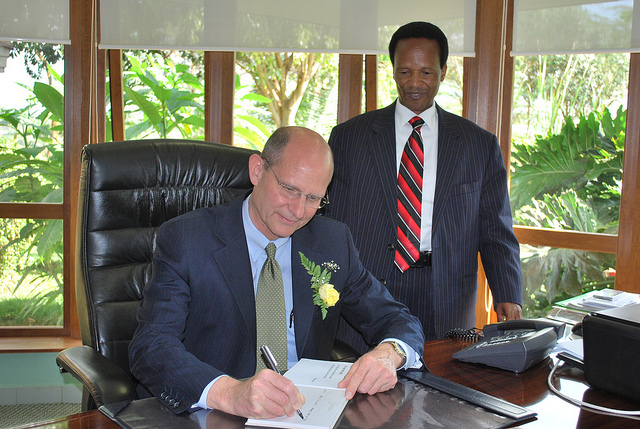 Three days after Spectrum was told at statement would be coming "shortly" and two days after IRLA spoke out, the Seventh-day Adventist Church released a statement on its executive representative for the East-Central Africa Division. It responds to Elder Ruguri's statements supportive of extremist anti-homosexuality legislation made at the dedication of church offices for the Southwestern Uganda Field. As is part of the church's offical statement and was also happening behind the scenes, there were attempts to discredit the New Vision report. The church states:

Recent comments in the Ugandan newspaper New Vision attributed to the head of the Seventh-day Adventist Church in East-Central Africa do not convey an accurate representation of his intentions or the voted position of the church regarding homosexuality. . .

The newspaper reports suggest that Pastor Blasius Ruguri fully supports the proposed legislation before the Ugandan Parliament that may include incarcerating and even executing people for same sex intimate contact.

In response to those reports, pastor Ruguri today said, "It is unfortunate that the media took the liberty to extend my statements to suggest what I did not say or imply. I have never seen that bill. Mine was a general statement to disapprove of homosexual practice and behavior.

Ruguri might want to work on his communication skills since he appears to have misled another reporter for a different newpaper on the same day. (This has not been reported until now.) The Daily Monitor writes:

Homosexuality and corruption took a centre stage at the function, with both local and regional SDA leaders promising to challenge the vices.

The SDA president for East Central Africa, Pastor Blasious Ruguri, advised Uganda not to bow to foreign pressure and allow “forces of evil” to take over the country.

“As the SDA, we stand by you (Ugandans) in solidarity against homosexuality even when some countries are threatening to cut aid to you,’’ Mr Ruguri said.

Elder Ruguri appears to either be misleading people in Uganda or the rest of the Seventh-day Adventist Church. Raising the issue of aid and foreign influence is not a "general statement." It is a reference to the political climate around the Anti-Homosexuality bill in Uganda. Here is the quote of Ruguri in the New Vision:

Our stand is "zero tolerance" to this vice and to western influence on this crucial issue because God says no to it. We are together with the President and the Speaker and we fully support the Anti-Homosexuality Bill. I call upon all religious ministers, all Ugandans, and all Africans to say no to Homosexuality. Let us stand for our sovereignty as Ugandans and as God fearing people even [though] the heavens fall.

It seems odd that Ruguri would so similarly mislead two reporters in two papers about his speech's focus. Not evident in the official statement is if Ruguri or church leadership has requested a correction from the media which is usual institional communication practice in these circumstances.

Political leaders around the African continent might find it odd that Ruguri finds attacking homosexuals more important than foreign aid.

Adventists might find it odd that General Conference administrators who preach unity are connected to someone who appears to use church dedication ceremonies to divide people.

Those at the Adventist headquarters in Silver Spring, Maryland, might find it odd that they are publicly supporting someone who seems to confuse hearers about his feelings toward "foreign pressure" and "Western influence."