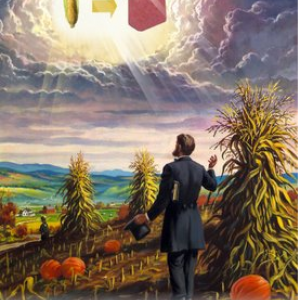 Welcome to the Ash Wednesday of Adventism. To properly "celebrate" the downer emotional experience of Great Disappointment Day, here are a few reminders of why this day is so different.

William Miller had grown up in Low Hampton, New York, near the Vermont border. He married in 1803 and moved to Poultney, Vermont, where he farmed and served as a sheriff and justice of the peace.

The area, filled with homesteading farmers, was on one of the main routes from New England to the Midwest. From the settled towns of the East, thousands of adventuresome Yankees were streaming toward the new lands beyond the horizon.

Optimism filled the air. One anthem in the 1840s announced, "We are living, we are dwelling / In a grand and awful time / In an age on ages telling. / To be living is sublime."

Millennial dreams flourished throughout the region. At Oneida, New York, a strange perfectionist named John Humphrey Noyes founded a community on the assumption that the Second Coming had taken place in A.D. 70 and the arrival of the kingdom hinged on the willingness of believers to live out the demands of Christian love in community.

Another New Yorker named Joseph Smith believed that God had restored the true gospel to him in anticipation of the Second Coming. This grand event, he said, would be preceded by intense persecution and tribulation for his followers, "the latter-day saints."

Neither of these prophets, however, rallied so many people in so short a time as did Miller when he went public with his precise calculation of Christ's second coming.

At first he was reluctant to reveal his secret. But in 1828, he felt an inward "call" to tell the world of his discovery. "I tried to excuse myself," he later wrote, "I told the Lord that I was not used to speaking. . .that I was slow of speech and slow of tongue. But I could get no relief." 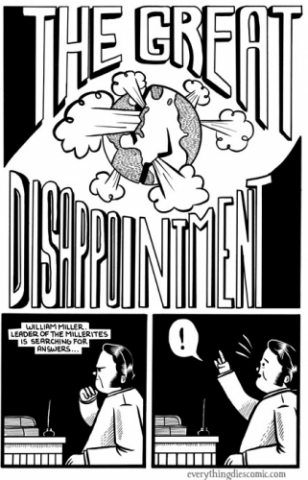 Click here to read the whole Everything Dies web comic, by Box Brown. It explores the The Great Disappointment. H/t Jeremy Fujimoto-Johnson.

Top image by the Adventist Caricaturist.

Share below, how will you be celebrating/getting depressed today in honor of The Great Disappointment?