Summer Reading Group: The Perils and Promise of Media Technology

Summer Reading Group: The Perils and Promise of Media Technology 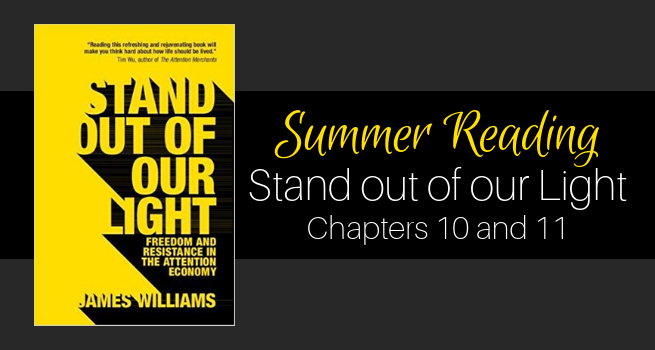 This is the sixth post of Spectrum’s 2018 Summer Reading Group. Each post will be drawn from chapters of the book Stand out of our Light by James Williams. You can view the reading/posting schedule here.

I first experienced the effect of the Internet before there was such a thing as we know it. In 1989, I moved from the bucolic beauty of Pacific Union College and Angwin, California, to the urban campus of Columbia University in New York City. The shift from a rural to an intensively urban environment brought real changes in my daily environment.  One that became rapidly evident was an ongoing, sensory overload. The noisy streets and bright lights of America’s largest city bombarded one’s senses during every waking hour and interfered with many a sleeping one.

Other than sleep — which one had to guard carefully with window shades and ear plugs — there seemed to be no escape from attention-demanding stimuli. Much of this was random and undirected, whether it be the roar of cars, the wailing of sirens, or the humming street lights. But some of it was very intentional and focused on capturing attention, such as the ubiquitous billboards, neon signs, and posters that seemed to be plastered on every square inch available on the walls of streets and subways. Wherever one looked, one was assaulted with words and vivid images designed to capture one’s attention.

I became quickly aware that a greater effort had to be made in the urban environment to give one’s attention intentionally and carefully. Otherwise, one would be constantly distracted and unfocused as one’s attention was pulled hither and yon. One had to discipline one’s attention to focus on those things that actually corresponded with one’s values and world view. The advent of the Internet has caused all of us almost all the time to have to learn this same lesson or to lead increasingly fragmented lives, with interrupted and shortened attention spans, and a focus on things we care little about, or even oppose.

My experience in New York has caused me to be somewhat skeptical of some of James Williams’ claims about the absolutely unique status of the threat to our attention posed by the Internet and social media. In chapter 10, he claims that this challenge is not “analogous” to previous medias but “is creating new problems of kind, not merely of degree” (87-88). I’m not so sure this is the case, and it seems to me that previous advances in technology also had the power to shape the human mind in similar ways. Think of oral cultures, whose members would memorize huge swathes of history and sagas, a practice no longer necessary when writing was invented, and then print. The advent of the video culture posed a similar challenge to reading culture as the boob tube mesmerized a whole generation, or so we were told.

Yes, some people succumb to the sea of print, or video, or internet bandwidth, or social media content. But many of us realize we need to create boundaries and set limits on the use of these things. We realize that we need to choose to let our values guide that use rather than allow these tools to dictate our values. I think that this is indeed the experience of most people. Consider Williams’ concern that in the hands of a “few dozen people” lies the power to shape our “attentional habits” and, ultimately, our political and ideological views (87).

Yet, the political story of the last two or three years suggests very much otherwise. The secret of the Internet, and American media generally, is that while the elites that control it have a distinct left-wing political and ideological tilt, the real driver of media tends to be the appetites and passions of the people to whom they are selling programming and advertising. In other words, the media, and especially social media and the Internet, which is particularly responsive to the direct desires of people (think micro-advertising, where you are shown things that the Internet has discovered you are interested in, thus intensifying desires that originate with you) is generally shaped to respond to your interests and desires.

If a few dozen elites had been successful in shaping our political and ideological views over the last decade, I can almost assure you that Donald Trump would not have won the presidency. A very high percentage of educational and media elites were strongly opposed to the Trump candidacy. The reality is that the Internet and social media tends to reinforce the underlying interests and passions of the people to which it is directed. These media and its users exist in a kind of symbiotic, feedback loop.

The Internet is a magnifier of the underlying human condition, and this can be a very bad and scary thing. It brings to mind the description of the antediluvian earth where the thoughts of men were constantly evil. The Internet has made this a live and tempting possibility for many people today.

But, and here is the flip side, technology and social media can also be a magnifier of positive aspects of humanity. There is a history of truth tellers — the Old Testament prophets, the New Testament apostles, the early church fathers, or the Protestant reformers — using the latest technologies, whether scroll and script, or palimpsest and printing press, to advance the gospel. Indeed, religious writings were often the motor that justified and catalyzed the creation of new means of communication. Printing had been in existence for half a century before Luther’s birth; yet, many historians believe that it was the popularity of Luther’s writings that helped create and shape printing as a sustainable industry.

Today, I use Facebook as very much part of my teaching life and ministry as well as to stay in touch with friends new and old. I communicate with old students and continue discussions that began many years ago in my classes. I organize events with students, whether it be intermural teams or tennis appointments. I create videos that promote my views of church history or religious liberty or a Christian take on current events that I pose on social media and use to generate further conversations. For me, the social media landscape is a new and important frontier for Christian thought, engagement, and outreach.

I respect the need for some to take a break or an escape from social media, and I do that occasionally myself. I also think that young people especially are tempted to create social lives online that minimize interpersonal interactions and in-person social skills. This can leave them with many virtual “friends” and very few real friends. They are superficially connected with scores of near strangers while remaining deeply lonely. Social medial should be a supplement to a real social life and not a replacement for it, and this is a temptation for all of us. It can also breed a hothouse of false image and negative comparison that can lead to anxiety and depression especially in young people.

Williams does a service in showing the dangers of over-reliance on social media and the need to have it as a servant and a tool and not a master. But I fear his prescriptive solutions tend toward the political and coercive, and this could be worse than the problem he describes. In his chapter 11 on the “The Monster and the Bank,” he suggests that this new medial frontier needs to be tamed and controlled somehow. But he really does not offer clear and practical suggestions for doing this.

He appears to be pushing for some form of regulation, but this always comes with a cost. I am not opposed to all forms of media regulation and believe that much more could be done in terms of controlling and limiting access to various kinds of pornography, obscenity, and access to illegal, anonymous transactions. I think the dark web should not be exempt from law enforcement oversight. But the kind of regulation he seems to envision do not relate to these clear areas of well-defined exemptions to free-speech laws. Rather, he appears interested in a more amorphous kind of regulation that makes social media more responsible in vaguer ways.

My fear is that this approach quickly becomes justification for clearing religiously and politically conservative views from social media sites. I have already had religious scholar colleagues whose Facebook pages have been suspended for their views on issues related to human sexuality. As we become more and more dependent on social media as the new public forum of expression, there should be less control of private expression, at least in those areas traditionally protected by free speech principles. If not, we are ceding our free speech rights to the control of unelected, unaccountable, massive private corporations that do not need to respect the First Amendment. These are behemoths that we certainly do not need standing in our light.

In New York, I learned that one had to take control of one’s attention. That experience has served me well throughout life. It is a lesson that all responsible adults must learn. We cannot “uninvent” the Internet, or social media, and significantly controlling it throughout state regulation comes with its own costs to human freedom and liberty. We are stuck with it. We may need to minimize the use and exposure of our children to it. But we also need to empower them, as they grow up, with the autonomy, values, and resilience to become its masters rather than its victims.

Nicholas Miller is Professor of Church History at the Adventist Theological Seminary at Andrews University where he is also Director of the International Religious Institute. He recently published a book on the development of religious freedom and civil rights in the west titled 500 Years of Liberty: From Martin Luther to Modern Civil Rights (Pacific Press, 2017).