Book Review: Transforming the Bible and the Lives of Transgender Christians 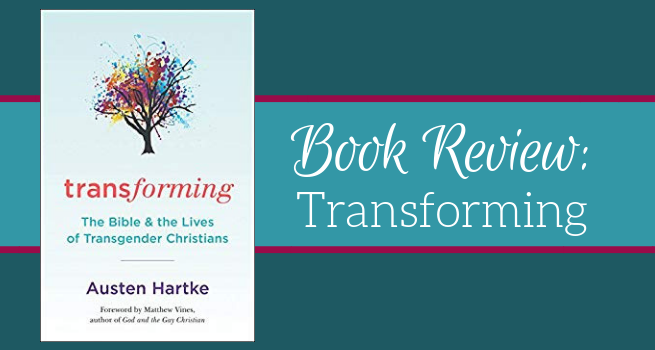 The June 9, 2014 cover story of Time magazine proclaimed, “The Transgender Tipping Point” with a photo of actor Laverne Cox, a prominent, successful transgender woman. Since this issue, there have been and there are presently ongoing actions at various levels of government that seek to deny transgender people civil rights. At the forefront of this push, in large part, are evangelical and fundamentalist churches, and leaders within these movements. Starting in 2015 and continuing to this day, there have been numerous bills and referendums at the state level offered for consideration, passed by state legislatures and some even signed into law by governors. The efforts don’t stop at the state level, but include local ordinances and school system policies. Since January 2017, the efforts have expanded to include both U.S. federal law and U.S. administrative law and policy across a wide array of U.S. federal agencies.

Looking back over the past four years it feels like the Time magazine declaration was premature. At that time, it seemed transgender rights were going to advance nicely on the heels of the repeal of “Don’t Ask, Don’t Tell” in late 2010 and with the U.S. Supreme Court Decision in Obergefell v. Hedges in June of 2015. The feeling that the tipping point was past seemed logical. The optimism was short lived, however, as the battle over Houston’s Proposition 1 quickly heated up, with the Evangelical Christian community leading the charge in an effort to overturn a Houston Civil Rights ordinance that provided protection to minority members of the Houston community, including transgender people. The Proposition was resoundingly defeated, overturning the ordinance and eliminating broad protections for a wide range of minorities including transgender people. The “Christian Right,” feeling empowered from the Houston success, proceeded to pass North Carolina’s House Bill 2 in the spring of 2016, again actively taking a hostile position toward transgender civil rights and civil rights in general.

It is with this backdrop that Austen Hartke has put out his timely book, Transforming: The Bible and the Lives of Transgender Christians. Hartke is an ideal voice for the task at hand. He holds a Master of Arts degree in Old Testament/Hebrew Bible Studies from Luther Seminary, and he is a transman.

The book is a resounding success and it is a must-read for the thoughtful Christian or person of faith seeking to engage in conversations about gender and sexuality, or who just seeks greater understanding of the questions surrounding these topics. The book is written in two major sections. In the first section, Hartke creates the knowledge base that provides sufficient understanding of the forces and various perspectives within the Christian community. Many at present are very hostile; others range from ambivalent to affirming. The topics in this first section look at the varied perspectives within the Christian community, specifically at the predominate and dominate voices within the evangelical Christian movement that are hostile to transgender people, at some of the organizations actively funded that advocate within the Christian world, and at governments attempting to marginalize LGBTIQ people and deny the very existence of transgender people.

The first section goes on to provide a concise Gender 101 course for those who may need it, providing definitions used commonly when discussing gender, transgender, gender dysphoria, and non-binary individuals. There is coverage of the broader cultural history of gender, gender roles, and how they are encountered across culture and time. This section also provides an excellent, although brief, overview of the current knowledge and understanding of science, medicine, and psychological and sociological communities relating to transgender people and caring for them.

The first section concludes with an in-depth critique of Christian psychologist Mark Yarhouse’s 2015 book, Understanding Gender Dysphoria: Navigating Transgender Issues in a Changing Culture. The critique is insightful, and clearly identifies the problems that arise when either the “integrity” or “disability” frames, which Yarhouse proposes, are employed. Hartke then shows how Yarhouse’s third frame, “diversity,” presents a model that provides a positive frame for the embrace of diversity, both based in the science we can observe, but also through the scriptures. Moving forward, Transforming builds on the idea that diversity within the creation was intended by the Creator, and that when scripture is rightly understood it calls the church to be affirming of gender diverse people.

Section two of the book is largely engaged in apologetics relating to the topic of gender diverse and transgender people. In this section, the stories and experiences of several Christian transgender people are woven together providing context to the apologetics and introducing the very personal and profound experiences of transgender Christians. The author delivers thoughtful, well-reasoned discussions of key scriptures and passages that are areas of conversation and contention within the Christian world. Hartke’s knowledge and understanding of scripture and his expertise in Jewish and Old Testament studies provides insightful perspectives and a sound position for faithful understanding of scripture that supports an affirming position of trans and gender diverse people, and their full inclusion in the fellowship of believers.

The coverage of scripture starts with the creation story, looks at the gender roles as understood at various times in Jewish history, carrying through to Paul’s writings, and our current perspectives on gender roles within the church and society more broadly.

For many, particularly family members and close friends of transgender people, the use of the trans-person’s new name and pronouns provides a significant challenge and a point of tension. An entire chapter is devoted to this topic and it provides a beautiful, balanced, and thoughtful perspective, incorporating a scriptural model for the practice of renaming of individuals at key times in a person’s spiritual journey. This chapter creates a possible approach to a beautiful affirming sacrament that could help the church community embrace and support trans congregants and their families.

The topics of “basic” inclusion within the community of faith along with “priestly” roles in the community are covered with a graceful touch. Drawing from his knowledge of scripture, Jewish writings, culture, and history, Hartke makes a compelling case that transgender and gender non-conforming individuals should be considered in the same light as eunuchs set out by Isaiah, opening the sanctuary to eunuchs, and as those to be included in the faithful. He then extends the case forward using Christ’s admonition and extension of Isaiah’s writings to include venerating eunuchs and by extension transgender people, in the Kingdom of Heaven. Finally, Philip’s encounter with the eunuch nicely supports this position.

Although the current statement issued by the General Conference of Seventh-day Adventists acknowledges the existence of trans identifying individuals, and even calls for kind treatment, it stops well short of true compassion and understanding. The statement stops its support at the point where science, medicine, and psychology recommend we go: treating gender dysphoria and transgender people by social and/or physical gender transition. Transforming effectively addresses this topic to include holding space for transgender individuals in the “priesthood” or clergy.

The last few chapters of the book move away from apologetics and Hartke turns his attention to how the church might “do it right” in its search for an affirming stance with trans and gender non-conforming people. Church leaders, be they lay leaders, clergy, or administrators, will serve themselves well to take to heart the advice shared in the later chapters.

This book is carefully referenced and annotated for those who want to dig further into the research and materials used. There is also a section with many excellent resources.

Transforming captures the lives, experiences, and truths of scripture and the Christian journey of transgender people better than any book I have read to date. As a point of reference, I have read all but a couple of the books listed in the section of the book titled “Further Reading,” along with many titles not listed. Further, the book reflects the lives and thoughts of the many transgender and gender non-conforming people of faith that I personally know.

Randi Robertson writes from her home on the Florida Space Coast. She is a retired United States Air Force Lieutenant Colonel and Command Pilot. Currently she stays busy as a simulator and academic instructor for an international aviation training company, teaching pilots to fly the Cessna Citation 560XL. She also spends time working as an advocate, speaker, and consultant seeking to create a more inclusive and understanding world for transgender people. She and her spouse of 34 years have two wonderful, twenty-something children, who choose to live at home. Randi is a life-long Seventh-day Adventist, and is active in her local congregation.