Summer Reading Group: "You Are the Product” 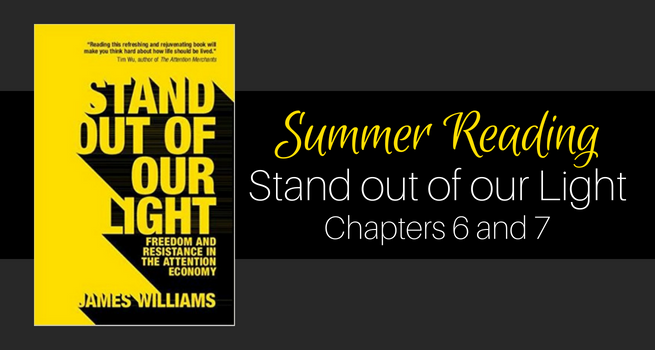 This is the fourth post of Spectrum’s 2018 Summer Reading Group. Each post will be drawn from chapters of the book Stand out of our Light by James Williams. You can view the reading/posting schedule here.

Chapter 6 of James Williams’ Stand Out of Our Light is titled, “The Citizen is the Product.” The essay marks a transition in the book from Williams’ broad analysis and critique of our new technological “armies of distraction” to a specifically political warning about the perils these forces pose for democratic values and institutions. Before engaging with Williams’ reflections, however, I want to attend to a closely related fact of our digital economy. If “the citizen is the product,” as William says, it also turns out that the consumer is the product. We might imagine ourselves to be sovereign “customers” making free choices about what we will or won’t consume in the marketplace of goods and ideas. In fact, we are ourselves increasingly the product that is being sold. In the act of consuming, we are being consumed.

Consider the social media giant that lost nearly $120 billion in market capitalization in a single day in July, yet is still valued at over $510 billion — despite ongoing controversy over its harvesting and selling of user data to the political consulting firm Cambridge Analytica.

When I first created a Facebook account in 2006, the site (launched just two years earlier by Mark Zuckerberg and his roommate Eduardo Saverin for Harvard students only) was still unknown to most people in the world. I was a relatively early adopter. One could only sign up, at the time, if one had a valid college or university email address. This soon changed. By 2008, there were 100 million Facebook users. Today, there are more than 2.2 billion worldwide, in nearly every corner of the globe (apart from China, Iran, Bangladesh, and North Korea — at least officially). Facebook’s global reach was vividly — and annoyingly — brought home to me while I was conducting postdoctoral research in East Timor in 2012. I discovered that one often had to wait for hours to secure a computer at the local internet café since it was filled most afternoons and evenings with East Timorese high school students avidly attending to their Facebook pages and voyeuristically scrolling through the pages of others.

Initially, I was an enthusiastic Facebook user. It was a powerful tool for organizing events, sharing photos, reconnecting with friends who one would otherwise have no ability to stay in touch with, and, yes, voyeuristically peering into the lives of others. Soon I was receiving friend requests from people in far flung corners of the globe, including my childhood classmates in Zimbabwe and former students on Yap Island in Micronesia (where I had taken a year out from college as a volunteer teacher a decade before). I often extolled the benefits of Facebook to friends and family who were not already signed up.

Six years ago, however, I deleted my Facebook account. I have not looked back. Although I have admittedly not extricated myself completely from the world of social media (I can still be found now and then on Facebook-owned Instagram), I consider leaving Facebook to have been a small step toward liberation from a highly corrosive and even sinister force in our lives. Why did I leave?

First, I had a growing sense that Facebook — with its constant stream of novel content and images — was eroding my ability to sustain concentration on less ephemeral forms of communication, particularly books. I later found strong empirical support for these fears in Nicholas Carr’s sobering and disturbing book about the neuroscience of Internet technology, The Shallows. I also became increasingly worried by how Facebook was not only making me a restless consumer of ephemera and voyeur of other people’s lives but was also making me an exhibitionist in my own life. I found myself continually crafting a kind of glamorized and idealized version of myself for a public audience. This might be unavoidable even in normal face-to-face human interactions, yet Facebook seems to greatly amplify our natural human tendencies toward narcissism and performative living. Social media leads many of us — consciously or not — to behave like minor celebrities with our own devoted “fans.” And as one’s audience grows, the lines between private and public life blur and collapse into what the philosopher Byung-Chul Han calls “hypervisibility.”

This self-inflicted loss of a considerable part of what was once private life to the insatiable maw of social media fundamentally alters our relationships with people and places. One might go on a vacation to a new country, for example, and spend an inordinate amount of time trying to take the perfect photos to post on Facebook, all with a view toward garnering more “likes” from hundreds if not thousands of “friends.” In the process, one might fail to simply step back and fully appreciate what one is viewing through one’s lens. Worse still, one might go to a new place full of rich and remarkable things and spend hours staring on one’s screen at images taken by other people in other places. In a word, Facebook chips away at our ability to be fully present. It causes us to feel and act as though life is only truly worthy of our attention after it has been digitalized and offered up as a product for social consumption. The vicarious and virtual comes feel even more “real” than reality itself.

An important tipping point for me in my decision to leave Facebook was an article by William Deresiewicz in the Chronicle of Higher Education titled “The End of Solitude.” According to Deresiewicz, we are living in an age in which many of us are only able to become “real” to ourselves by being seen by others via our new technologies. Absent an ever-present audience and constant feeling of “connection,” our sense of personhood is highly fragile. “The great terror is anonymity,” writes Deresiewicz. He describes students who send thousands of text messages each month and who compulsively check their social media sites hundreds of times a day — all to stave off desperate fears of loneliness and social isolation. Yet rather than filling the void of loneliness, social media tends to intensify it by feeding what are in fact behavioral addictions. As the character Mercer Medeiros tells Mae Holland in Dave Egger’s dystopian science fiction novel, The Circle:

It’s not that I’m not social. I’m social enough. But the tools you guys create actually manufacture unnaturally extreme social needs. No one needs the level of contact you’re purveying. It improves nothing. It’s not nourishing. It’s like snack food. You know how they engineer this food? They scientifically determine precisely how much salt and fat they need to include to keep you eating. You’re not hungry, you don’t need the food, it does nothing for you, but you keep eating these empty calories. This is what you’re pushing. Same thing. Endless empty calories, but the digital-social equivalent. And you calibrate it so it’s equally addictive.”

Mercer’s observation that digital “empty calories” are carefully calibrated by the corporation to maximize our consumption of what it is purveying leads to the final and perhaps most important reason why I left Facebook. Contrary to popular belief, Facebook is not a “free” service. For one thing, Williams points out in Stand Out of Our Light, we pay a very high cost for this kind of technology in terms of attention and foregone opportunities. “You pay for that extra hour on social media with the sleep you didn’t get and the fresh feeling you didn’t have the next morning,” he writes. “You pay for giving in to that outrage-inducing piece of clickbait about that politician you hate with the patience and empathy it took from you, and the anger you have at yourself for allowing yourself to take the bait in the first place.” But beyond the costly inner and even spiritual effects of Facebook such as these, there are direct economic realities to our social media usage that we tend to push out of our minds if we think of them at all.

In 2012, Facebook became a publically traded stock and the same year began to successfully monetize its platform through increasingly aggressive and sophisticated advertising techniques. By this time I was already troubled by the fact that I was not only using Facebook — I was being used by Facebook. The social network is ultimately a ruthlessly pragmatic engine designed for one purpose: to deliver viewers to advertisers for the sake of maximizing profits. Every interaction every user has with Facebook is thus a form of labor performed for Facebook, helping the company to build ever more refined algorithms and psychometric tools in order to target users with ever more effective, more penetrating advertising. How did Facebook become one of the most powerful corporations on the planet? Facebook does not sell you anything. It sells you to the marketers — a kind of human trafficking.

Older forms of mass media have always been rather crude instruments by comparison. Television networks know, for example, that viewers of the nightly news tend to be older people and so broadly more susceptible to ads for prescription drugs than, say, Millennial viewers of Key and Peele. But these shotgun attempts to reach viewers by firing ads at large demographic groups are largely hit or miss. Facebook, by contrast, is able to direct ads at its users with the precision of a sniper firing at close range. It is able, for example, to carefully calibrate what will be prioritized in a user’s newsfeed in order to maximize the time that person spends engaging with the site. It is further able to personalize ads to exploit vulnerabilities in users so as to better deliver them to advertisers. In one of Facebook’s internal reports leaked in 2017, for example, it boasted that it was able to determine the emotions and moods of its teenage users in real time. Facebook is now able not merely to target users based on their demographic data but to actually direct ads to individuals based on how they reveal they are feeling as they interact with the platform.

In the face of forces as powerful as these, the human will is easily overwhelmed. Yet the will, according to Williams, “is the source of the authority of democracy.” He continues, “If the digital attention economy were compromising the human will, it would therefore strike at the very foundations of democracy. This would directly threaten not only individual freedom and autonomy, but also our collective ability to pursue any politics worth having.”

These are the themes that Williams and other reviewers will continue to explore in the weeks ahead.

Ronald Osborn is a wandering philosopher and author of Humanism and the Death of God.