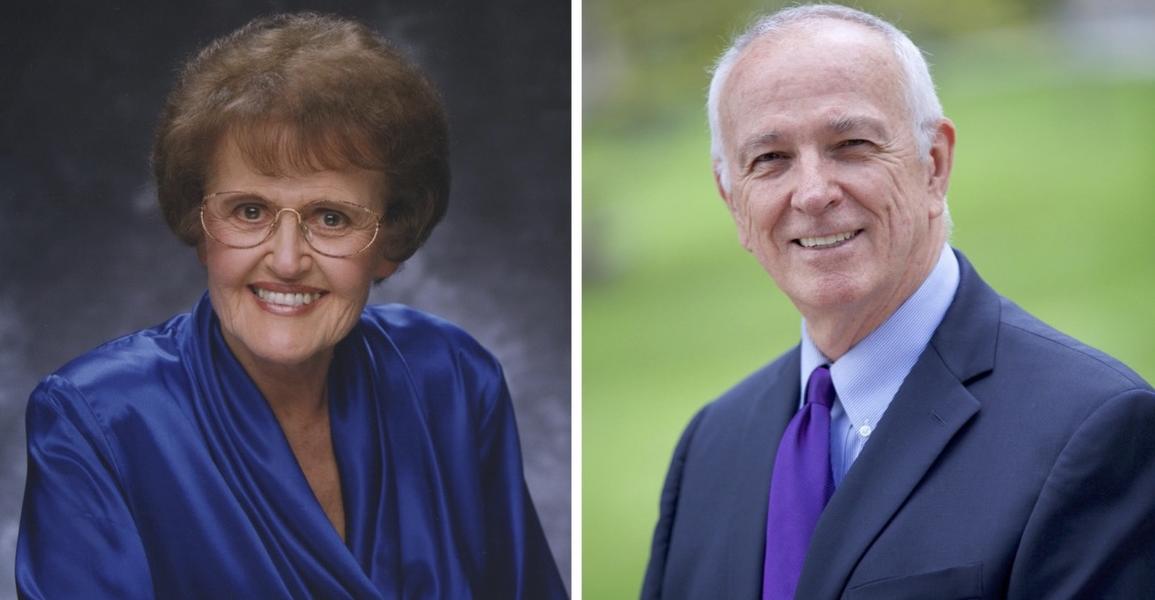 The Del Delker Endowed Scholarship fund opened during Homecoming weekend in April and was seeded on July 18 with a gift from long-time Delker friends Lonnie Melashenko, an acclaimed radio and television evangelist, and his wife, Jeannie.

The Dr. V. Bailey Gillespie Memorial Scholarship Endowment Fund opened in May, established by a group of Gillespie’s long-time friends and members of La Sierra’s Class of 1964, Gillespie’s graduating class.

Organizers of both funds must raise $25,000 for each endowment to be established. The La Sierra University alumni office recently issued announcements to its base of La Sierra graduates and former attendees with information about the two new funds. They are among 140 donor-based scholarships managed by the university’s Office of Advancement.

Delker, a world-renowned contralto who performed 60 years in venues around the world with international radio ministry the Voice of Prophecy and noted Adventist musicians, graduated in 1958 with a degree in religion from La Sierra College, now La Sierra University. She passed away on Jan. 31 at age 93, beloved by scores around the world for her rich, melodic voice through which she shared her dedication to Christ and the gospel message.

Delker traveled and ministered with the Melashenkos for nearly 20 years while Lonnie served as director and speaker for the Voice of Prophecy. Lonnie Melashenko, a 1968 La Sierra graduate, recalled Delker’s “sense of humor, integrity, love for Jesus and La Sierra.” The Melashenkos donated $2,500 to start the La Sierra endowed fund in honor of Delker and in thanks for Lonnie’s miraculous recovery following surgery on June 27, 1978, for stage four melanoma.

“We wish to celebrate by being the first contributors to the Del Delker Scholarship Fund, in honor of God’s hand delivering me from cancer 40 years ago,” Lonnie said. More recently he also survived prostate cancer for which he underwent surgery in 2015.

Said Melashenko, “We hope and pray other alumni might consider a matching donation to our initial $2,500 to start this fund.” The couple is giving 100 Delker biographical books by Ken Wade to the first 100 contributors who give any amount to the fund.

Delker officially began her international singing career when she joined The Quiet Hour ministries in 1947, the same year she joined the Seventh-day Adventist Church. That summer the Voice of Prophecy leadership invited her to sing for their radio broadcasts and to serve as the organization’s secretary. She made her first recording in 1951 on an album that featured the VOP’s male quartet, the King’s Heralds, and went on to record more than 40 albums under Chapel Records, the official record label of the Seventh-day Adventist Church.

Over the years, she performed with many renowned Adventist musicians and worked with famed Adventist composer Wayne Hooper. She collaborated during the 1980s and 1990s with Broadway musical and Hollywood film composer Hugh Martin who was noted for writing the tune, “Have Yourself a Merry Little Christmas.” Martin, who converted to Adventism, updated the song for Delker and re-titled it, “Have Yourself a Blessed Little Christmas.”

Gillespie, a noted Adventist researcher and professor, passed away on May 7 at age 75 following a 15-month battle with liver cancer. He served the Seventh-day Adventist denomination for 54 years including 42 years as a religion professor at La Sierra University in the H.M.S. Richards Divinity School. The school is named for famed Voice of Prophecy pioneering radio evangelist H.M.S. Richards, Sr. for whose programs Delker and The King’s Heralds performed.

Three 1964 La Sierra graduates who were long-time friends of Gillespie’s established the scholarship fund in his honor. Darrell Ludders along with George Lizer and class president Ralph Thompson contacted other former Gillespie classmates and friends to help seed and launch the fund along with Gillespie’s family members.

“With Bailey as my best friend from sixth grade through college, I always knew with his outgoing personality, kindness, and fortitude he would be successful in whatever he set his mind to do,” said Ludders. “A conviction in college to major in theology led to his becoming, for over 50 years, a very powerful influence for God to his classmates, friends, students, and colleagues. Wanting to keep his legacy alive, some of his classmates have established a memorial fund to be used for students in the H.M.S. Richards Divinity School at La Sierra University.”

He added, “We are not limiting the founders to the 1964 class. It is open to anyone who would like to be a founder and who donates at least $1,000.”

Gillespie graduated from La Sierra College in 1964. He earned a Master of Divinity degree from Andrews University followed by a Ph.D. from Claremont Graduate University in Claremont, Calif. Among many other achievements, he spearheaded the landmark Valuegenesis research project, a longitudinal faith development study of students in grades 6-12 enrolled in Adventist schools. Begun in North America in 1989, Valuegenesis inspired spin-offs in Mexico, South America, Europe, and Australia. Gillespie founded the John Hancock Center for Youth and Family Ministry at La Sierra University to create resources for churches and schools so that they could turn research findings into practical applications.

During a May 19 celebration service for Gillespie at La Sierra University Church, North American Division Director of Youth & Young Adult Ministries Tracy Wood presented a tribute on behalf of the NAD in honor of Gillespie’s life and work. He expressed gratitude for “the amazing work he did in the church of North America and around the world. The decades of research that he participated in, the work and the projects that he led, and the many articles and books that he wrote. The grace-filled life that he modeled. All of these have been paramount throughout the years and across North America,” Wood said.

This press release was provided by La Sierra University. Image courtesy of LSU.