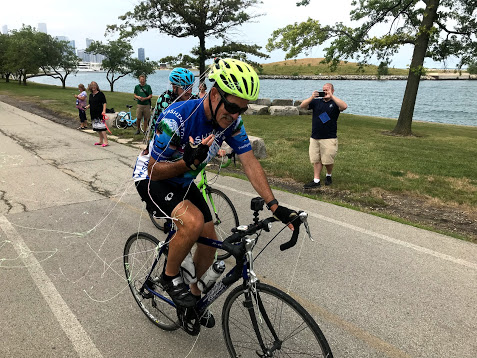 Question: You have just cycled 2,300 miles from Skagit Adventist Academy in Burlington, Washington to Chicago, Illinois, where you attended the NAD teachers' convention. What day did you begin? How many hours cycling did it take? How many miles did you cover every day?

What gave you the idea to cycle to the teachers' convention?

Several things entered into this: I like to challenge myself to do or learn something every summer. This was by far the largest challenge that I have set up for myself.

Also, I typically ride my bike to school (about five miles one way) and so I thought I would start this year off riding to my “first day of work.”

A third factor is that I am turning 60 later this year and I wanted to do something sort of “epic” before that happens.

Did you fundraise as part of the cycle? How much did you raise?

A former pastor and principal Mark Witas heard of this endeavor and he sent me a text message telling me he would like to make a per mile donation to my school's worthy student fund.  When my current principal heard of this it was made known to the local church community and donations and pledges totaling $6.37 per mile were made.  (This is the latest figure that I have heard.)

What is the farthest you have ever cycled before?

What did you do to prepare for the trip?

I rode my bike quite a bit more than I normally do — I had ridden over 2500 miles in the last six months before we started, which is about what I normally ride in a year.  I also had mapped out the route (pretty well), and done more than the normal amount of maintenance on my bicycle.

How big was your entourage? How many people came as support? Did anyone else also cycle the whole distance with you?

My son Craig was with me the whole time, and for the first week my brother-in-law Dr. Jonathan Fish and his son Brian were with us. They left after we had gotten through Glacier National Park.  My wife, June, and Craig's wife, Amanda who teaches at Cascade Christian Academy in Wenatchee, Washington and was also going to Chicago to attend the convention, were our support crew. For the first week my wife's sister Jane Fish and her daughter Natalie were support crew for the Fishes.

Did you cycle on small roads across the country? How did you contend with traffic?

Yes we tried to be on smaller roads — basically highway 20 across Washington (which is a nice trip in a car too), and then highway 2 across Idaho and Montana, with a small detour through Glacier National Park.

In eastern Montana we started heading southeast to avoid going through Williston, North Dakota, because I had read that there is a higher than normal amount of large truck traffic due to the oil well activity in the area. Unfortunately we didn't miss that traffic completely, and that first day in North Dakota was one of my least favorite as a result.

Once we got to Minnesota we basically followed the I-94 corridor, but not on the interstate (one day we rode 107 miles on a former railroad bed that has been converted to bike trail), and southeast of the twin cities we followed the Mississippi River. Again, the Great River Road is one that I would like to go back and spend more time on, but maybe in a car.

Then east across Wisconsin and south from Milwaukee to Chicago along Lake Michigan.

On a bike I don't feel I can really “contend” with traffic, but I try to choose routes with less and then be aware and hope that traffic sees you and gives you your necessary space.  Besides the large trucks in North Dakota, the traffic in Chicago was probably the most nerve racking — and that was using a route that was signed as a bike route.

What did you eat every day?

We ate a good breakfast (usually at whatever motel we stayed at) and then our wives met us at a predetermined location for lunch which was sandwiches, chips, and fruit, and then for dinner we would eat at a restaurant.  While on the bike we ate granola bars, energy bars and energy gels, and of course lots of fluid.

Yes, I am glad I did it, but also I am glad that it is done.  There were several things that were difficult: in Washington we had multiple passes each day for days two and three and the weather was quite hot. In Montana we had one day with beastly headwinds, and towards the end the cumulative miles started to exact their toll.

The most enjoyable part was spending time with my son and together as a family working towards a goal.  (Also finishing was pretty nice!!)

What kind of welcome did you get in Chicago?

At the finish all of my colleagues from Skagit Adventist Academy were there with silly string and a ribbon that they stretched across the path.  Also the conference superintendent of education, a former principal, and representatives from the NAD were there.

What do you most like about going to the teachers' meetings?

What I always appreciate about the NAD teachers conventions (they have been held every six years since 2000) is to be with such a large group of people who have similar interests and goals and to realize that even though we may teach in a small school somewhere, we are part of a very large organization.  And while each of us may only impact a relatively small number of lives, as a group we can make a difference in a large number of lives.  This time in particular, I saw a number of my former students who are now teachers — that was pretty special.

How does your adventure impact your teaching?

I think one obvious lesson I learned that I can pass along is perseverance — there were days when quitting would have been easy, but I knew that if I just did one more pedal stroke, and then one more after that I could eventually get to the finish.

Also I noticed that when I tucked in behind my son, it was much easier riding — much like when we follow the Son. Not that things are always easier, but at least you will be making progress in the correct direction.

Skagit Adventist Academy is a small school, right? What brought you there? What do you like about it? Where are you from originally?

Yes, there are 10 teachers and a principal.  It is a K-12 school with approximately 125-130 students.  My wife has family that lives here, and that was probably the biggest draw.  I like that my classes are small (from four to 20 students) and the school has a very family-like feel to it.

I grew up in Montana, attended Mt. Ellis Academy (where I also had the privilege to be a teacher) and Walla Walla University.

Except for my first three years of teaching which were at Sunnydale Academy in Missouri, I have lived in the northwest.

Do you have another big goal to look forward to, now that you have completed this one?

Not yet, but I think my next summer's goal will be to learn to make cannolis.

I understand that you have visited all the county courthouses in Washington and Montana. Why?

Just for something to do.  My wife and I decided we wanted to see the state that we lived in and that by visiting the county seat (courthouse) we would be forced to see a big portion of the state.  We first did Washington, when I taught at Cascade Christian Academy in Wenatchee, and then Montana when I taught at Mt. Ellis.

Photo of ride's finish in Chicago courtesy of Monte Saxby.