Sabbath at the Summit: A Day of Testimony and Song 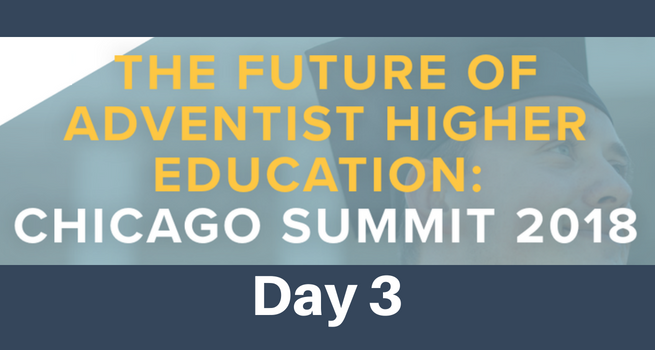 Attendees at “The Future of Adventist Higher Education: Chicago Summit 2018” rejoiced in both the Sabbath’s arrival and the 8:30 a.m. start time, which was a full hour-and-a-half later than Friday's had been.

Another continental breakfast greeted attendees, then the day officially began with a song by Jennifer LaMountain. The topics for the day centered on maintaining our unique Adventist identity while also welcoming students who do not share our faith.

Robert Benne, professor emeritus from Roanoke College, whose topic was “Will the Adventist Center Hold?” gave the first presentation. He spoke to the importance of holding fast to our Adventist tenets while looking for solutions. This has not been the case with some other Christian institutions that have succeeded in staying open but have “lost their souls” in the process.

Benne used the Mennonite institutions as an example of schools that had suppressed their Christianity in “the great temptation” of accommodating “liberal Protestantism,” especially on “sexuality issues” and Christ as the only way to salvation. We should “teach other religions with respect but not fall into religious pluralism,” Benne said.

Next, George Knight, professor emeritus of church history at Andrews University, gave a combination presentation and sermon (though he insisted it wasn’t the latter). He discussed “What Matters Most in an Adventist Education,” emphasizing that the answer is always students, and furthermore, what they take away from their educational experience at an Adventist institution. “Adventist institutions must fill a gap that other institutions can’t. . . . [They] must define what is crucial and unique in Adventist education,” he said, adding, “Why spend thousands of dollars to send your child to a school that is not substantively different from the Christian school down the street or even the secular one?”

Knight then discussed key takeaways centered on the student experience: developing young people intellectually, socially, and professionally; preparing them for the life to come; giving them a firm grasp of Adventist uniqueness, specifically on our understanding of apocalyptic and the Second Advent; and finally, teachers who truly care, have a service-mentality, and are intellectually competent. Good teachers are the most important takeaway, Knight said, because every other takeaway is dependent on the quality of the teachers (and other personnel). One thing students should NOT be taking away from their Adventist education is debt, Knight concluded, discussing the disservice it does when students are saddled with this burden.

After lunch, Cheryl Kisunzu, provost of Washington Adventist University, gave a presentation on “Preparing Seventh-day Adventist Higher Education for the Influx of Non-SDAs & Non-Christians.” She shared a moving testimonial on being the first black student to attend Forest Lake Academy in Florida. Kisunzu’s father, a principal at an all-black public elementary school in the the segregated South, feared sending his daughter to the newly integrated school up the road. That fear increased when five white men showed up at their farm and threatened the family if Cheryl or her siblings attempted to attend the school.

Her parents had seen ads in the Review & Herald for the various Adventist boarding academies and began to call each one, but none were willing to take an African-American student. They had not properly prepared “for one who was different,” Kisunzu said. Forest Lake was the only one that accepted her, though there were conditions. She would not be allowed a roommate and there would be times she wouldn’t be allowed to be part of the group, including on field trips.

Kisunzu used her story as an illustration for being prepared for the changing world our schools face now with the influx of non-Adventist, and in many cases non-Christian, students who want to attend. “Let the children come,” she said. This was Jesus’ philosophy, and it should be ours.

At WAU, 50% of the student population is Adventist while the other half is comprised of students from either other denominations or no faith at all. Kisunzu asked, how do we accommodate them respectively and proactively without compromising our Adventist tenants? She gave specific examples from issues that had arisen over the years at WAU with its large population of Muslim students from Saudi Arabia and with the students of other Christian denominations, and how each instance had been an opportunity to live out Adventism while at the same time creating a welcoming community for those who had other worship practices, dietary needs, and more.

In the afternoon, Jennifer LaMountain gave a mini-concert to attendees, and then Michael Thomas, president and CEO of the New England Board of Higher Education, gave the final presentation. His topic was “Between Collaboration and Merger: Expanding Alliance Strategies in Higher Education,” and he built on earlier presentations at the Summit by getting down to the nuts and bolts of how to implement collaboration.

Thomas began his presentation by noting that we were working on our Sabbath and joked that we have a bit of an ox in the mire situation today that requires us to work together on our day of rest. He got a few laughs, but overall the audience seemed slightly uncomfortable with a non-Adventist pointing this out though it had certainly been discussed among various attendees throughout the weekend.

When analyzing the Adventist institutions, Thomas said that we have 12 (open) schools with a combined 24,000 students and 2,400 faculty, covering a broad geography which includes five regional accrediting entities. Three of the schools’ student populations are over 50% graduate while the other nine are primarily undergrad. Four schools are at what Thomas described as “critical mass” with less than 1,200 students.

When it comes to continuing discussion on collaborating, we need to start with institutional self-appraisal, looking at key growth goals (and whether they’re realistic), who will “own” the alliance imperative at each institution and what resources will go toward the alliance. How will the board of trustees, the students, and the faculty/staff be engaged in the process? What are the opportunities for economies of scope (making complementary assets fit together), and what are the opportunities for economies of scale (combining supplementary assets for volume, efficiency and cost reduction)? Thomas concluded with some key takeaways for creating a successful alliance: utilizing member institutions’ strengths, seeking shared utilities and top talent, and pursuing multiple alliance design criteria.

With a wealth of knowledge to reflect on throughout the past several days, attendees were dismissed to enjoy the final Sabbath hours before returning Sunday morning for further discussion and the vote on the Chicago Declaration.

Read a summary of Day 1 here.

Read a summary of Day 2 here.

Alisa Williams is managing editor of SpectrumMagazine.org.Image courtesy of adventisthe.org