Attendees were abuzz at breakfast on the final day of “The Future of Adventist Higher Education: Chicago Summit 2018” about the vote that would happen in just a few hours.

Since Thursday, August 9, through today, Sunday, August 12, the over 200 attendees at the Summit had heard from presenters and engaged in discussion with each other about the possibility of an overarching Adventist University System. Individuals in leadership at Adventist colleges and universities, conferences, unions, and the North American Division all attended to contribute to the conversation on whether an alliance among the higher ed institutions should be formed and what concerns and questions were involved in that decision.

The panel had 45 minutes to reflect on the four days of meetings. Several shared the personal ways Adventist education had touched their own lives and the desire to see future generations have that same opportunity to grow, not just in knowledge but in relationship with Christ and the Adventist Church. More than one said they would not be sitting in this room today without the experience they had and the Adventist teachers who changed their lives.

Newton admitted he’d come to the meetings skeptical and was surprised to find himself now on board. “Our costs are inaccessible to the vast majority of our members. . . . We need to do something different. . . . What can we do together to move the curve toward affordability? Access, not only to our own members, but to the communities we’re trying to serve?” he asked.

Freedman shared a quote his father used to say: “The best time to plant an oak tree was 20 years ago. The second best time to plant an oak tree is today.” We can’t wait much longer he told the audience, adding that “hope is not a strategy.” He concluded by saying that “the Adventist culture is not one of cooperation; it’s one of individualism,” and we need to do better if we are to succeed.

Each panelist echoed the need for a spirit of collaboration. Fehr said, “I truly believe in the strength of working together. . . . We’re truly stronger as a group.” Freedman added to this by saying, “There’s nothing we can’t do when we work together under the Holy Spirit, . . . [but] we can’t do nothing.”

Thurber said that, “Adventist education is paramount to our church’s mission and growth, but it is not a given that we’ll always have it.” He reminded the audience that there was a time in our history when no one could imagine the church without its colporteur program, and there was a time we couldn’t imagine the church without Review & Herald Publishing, but both are gone now. We need to make changes now so the same thing doesn’t happen to Adventist education down the road. “Change is hard, but it can be a beautiful and wonderful thing,” he concluded.

Moore closed out the panel by saying something substantive needs to be done. “I hate to say more meetings, but I think unless our college leadership and our union leadership get together to take stock of what we’re doing, nothing is going to happen. . . . But to do that, we’re going to have to sacrifice some time and some funds. We can’t have a meeting every five years and hope for the best.”

The rest of the morning was spent discussing the new draft of the Chicago Declaration which had been revised based on audience feedback over the past days. Much of the more specific language had been removed as well as the timeline, and the declaration now stood at a simple one page (down from over three pages previously): 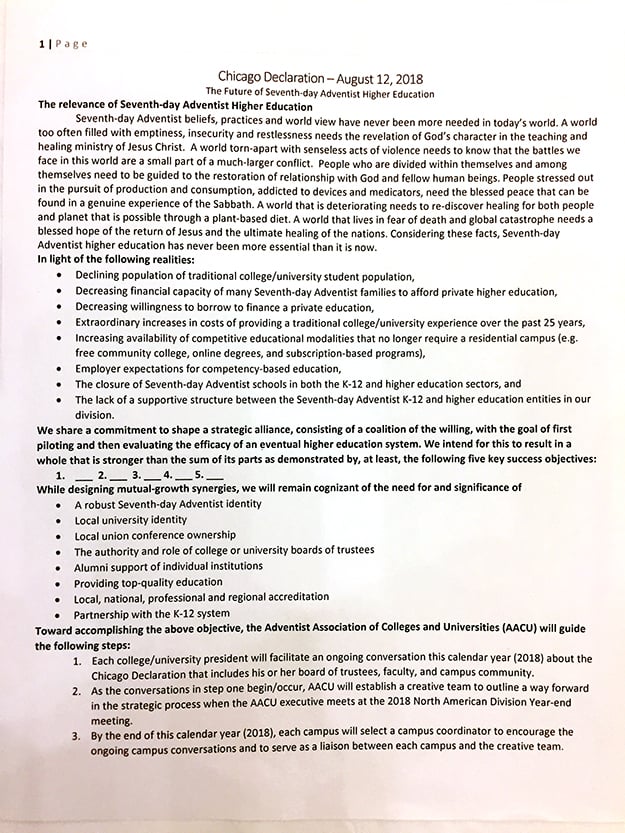 Joretta Nelson, a senior vice president and owner of Credo, led the final discussion on the declaration that would occur before the vote. Nelson was a friendly face for many in the audience because Credo is a consulting firm for several of the Adventist colleges and universities. She said that she has worked with 150 or so schools over the years, but “every time I get to work with one of your schools, I am touched so deeply [because] I can call out from you something deeper than yourselves.” She added, “We work with a lot of places without hope, but that is not you. You have hope. You just need to act like it!”

“Imagine the 2030 press release you would write about the outcomes of a fully realized higher education system. What is the evidence that such a system has addressed the needs explicated in this summit?”

Unlike previous days, where the seating assignments were more sporadic, today the tables were grouped by institution so that representatives from each school could confer among themselves before sharing publicly with the entire group. As an alumna of Andrews University, I was invited to sit at that table where President Andrea Luxton and Provost Christon Arthur led out in an energetic discussion with the group of nearly 20 representatives from Andrews.

Each school chose its top five answers to Nelson’s question and submitted them via the sli.do app. Once all the schools had submitted their top fives and the moderators had removed any duplicates, attendees were left with 42 answers that ran the gamut from higher enrollment and retention rates, to customized degrees and job placement for students, to more mentoring and better training for faculty, to affordability, and building all courses on a biblical foundation.

Next, Nelson asked participants to read silently through the Chicago Declaration and then confer with each other on what they liked and what they wouldd still like to see. Attendees at the Andrews table appreciated the slimmed down version of the declaration from which much of the rigidity had been removed.

Once the tables finished their discussions, Nelson asked that everyone go vote on the sli.do app, choosing their top five answers while keeping in mind the spirit of the Chicago Declaration they had just read. Those answers, as chosen by the group were these:

One individual pointed out that none of these spoke to what George Knight had called for yesterday — maintaining the uniqueness of Adventist education for the students. Nelson said that she felt the Chicago Declaration as a whole — the spirit of the document — spoke to this concern in an overarching way, and the audience gave their general consensus to this.

Finally, it was time for the vote. Attendees were asked to vote either yes or no to the following statement through the sli.do app:

“I affirm the strategic alliance concept as outlined in the 2018 Chicago Declaration.”

Of 121 responses, 93% voted yes and 7% voted no. Gordon Bietz asked if everyone had voted because there were over 200 attendees to the Summit (though several had to leave earlier in the weekend and were not present for the vote). One attendee shouted out that he didn’t have the app, but he was voting "yes" verbally.

With overwhelming support, the Chicago Declaration was affirmed. The audience then gave a heartfelt standing ovation to Bietz who was instrumental in the creation of the document and in organizing the Summit.

With the vote official and much to do to move forward with the concept of alliance, questions turned to the best way of disseminating the information to the masses. Bietz told the audience that within the coming weeks, all of the presentations would be made available on the Adventist Learning Community, an open source platform, primarily for pastors and educators, but that anyone can access.

Another attendee said this was great for everyone in the room, but how would regular members find out what was discussed here? Larry Blackmer said that he was sure the official Adventist press, like the Adventist Review, would be reporting, but the attendee said the members she knows — especially the young members — do not read the Review. Blackmer said Adventist Journey, the NAD’s publication, would undoubtedly feature a story, too, but the attendee was undeterred, saying the young people don’t read that either.

Blackmer, appearing slightly exasperated and amused, said finally, “Well then, they’ll read about it in Spectrum!” which resulted in much laughter and a few of cheers.

So, what happens now? Bietz and Blackmer were both clear throughout the Summit that this is just the beginning. But it is a promising start. With 93% of attendees, representing the various schools, conferences, and unions in the North American Division affirming the Chicago Declaration, the path has opened for an alliance that could mean Adventist higher education has a future, and that future is bright.