The Use of Pillory and the Seventh-day Adventist Church

The Use of Pillory and the Seventh-day Adventist Church 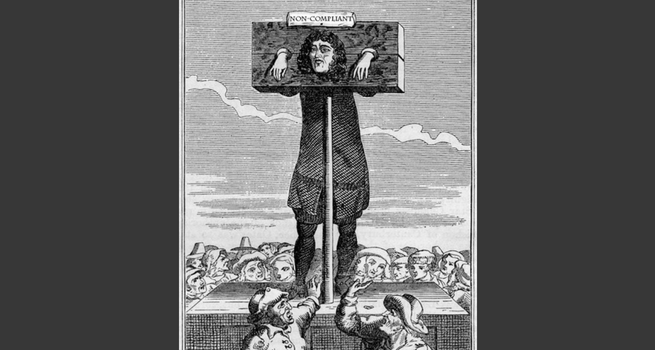 One of the suggestions that is included in the document goes like this:

Public Reprimand—… the president of…unions…that have not complied with General Conference Executive Committee actions…may be given a public reprimand. Each time the union president exercises his right of voice to address the General Conference Executive Committee, the members will be informed that the speaker has been given a public reprimand.” (Emphasis added.)

What is the thinking behind such a proposal?

There may be other reasons for this suggestion. The two reasons suggested above do not give the impression that the committee has based the way of handling a dispute in the Church on a biblically based principle.

If it is to attempt hindering committee members to use their right of voice, it must be based on a thinking that involves shame and public humiliation. Are we back to the age of the pillory?

According to Wikipedia, the pillory was in use in the United States until 1901. “Governor Preston Lea finally signed a bill to abolish the pillory in Delaware in March 1905.” Wikipedia makes it clear why the pillory was used: “The main purpose in putting criminals in the pillory was to publicly humiliate them.”

Regardless of what the committee used as a rationale for this suggestion, it will be interpreted as an attempt to publicly humiliate a person. “While the pillory has left common use, the image remains preserved in the figurative use, which has become the dominant one, of the verb ‘to pillory’…meaning ‘to expose to public ridicule, scorn and abuse,’ or more generally to humiliate before witnesses.” (Wikipedia)

As a Church, do we find it acceptable to be associated with reintroducing a form of punishment that has been abolished by democratic governments? Do we find that Jesus used such a method during his ministry?

The New Testament asks us to be cautious in judging our fellow men. In the case of the woman caught in adultery, we find Jesus giving this advice:

When they kept on questioning him, he straightened up and said to them, ‘If any one of you is without sin, let him be the first to throw a stone at her’ —John 8:7 (emphasis added).

Ellen White’s words in commenting on the greatest of all conflicts, Lucifer’s breaking of the law in heaven, seems to have been overlooked in the process of making the current document.

The exercise of force is contrary to the principles of God’s government; He desires only the service of love; and love cannot be commanded; it cannot be won by force or authority. Only by love is love awakened” (DA 22).

Finn F. Eckhoff is Executive Secretary of the Norwegian Union.