Is Ellen White the Last of God’s Prophets? 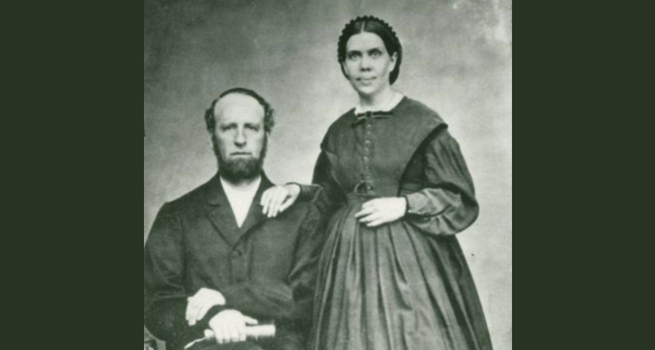 In early Adventism, the declaration that “Where there is no vision [prophet] the people perish” (Proverbs 29:18a KJV) was a highly valued insight. This verse came to define and embody Ellen G. White’s (EGW) role in the post-Millerite movement that developed into the Seventh-day Adventist Church. She became the Lord’s prophet and would shepherd the dispirited group of fervent believers who had expected the Lord would return in the fall of 1843 or 1844, or at least in their lifetimes. She would become, to this “little flock,” the conduit through whom God would reveal end time prophecies.

In what sense was EGW a prophet? To understand how she came fully to this role, we should situate her in the proximate time and events that influenced her. Ellen White (1828-1915) was born near the end of the so-called Second Great Awakening, the Protestant revival that began in the late 1790s and extended well into the mid-1830s. The three authentically American Christian denominations that have continued to our day — The Church of Jesus Christ of Latter-day Saints (LDS/Mormons-1830), Seventh-day Adventists (SDA-1863), and to a lesser extent, Jehovah’s Witnesses (JW-1870) — were all affected to varying degrees by the environment of this period.

Of these three, the LDS and SDA denominations had founders, Joseph Smith and EGW, who declared they communicated directly with God in ways reminiscent of biblical prophets. Ellen White more extensively than Joseph Smith. Neither Joseph Smith nor EGW had high formal schooling, and they relied on others in transcribing their encounters with God. Both leaders produced immensely important extra-biblical literature that would guide their respective churches long after their deaths.  Joseph Smith had the Golden plates (precursor to the Book of Mormon) and other “revelations” — the “Doctrine and Covenants” and the “Pearl of Great Price.” Ellen White produced some 40 books, 500 periodical articles, and more than 8,300 additional unpublished documents.

All biblical prophets, the models EGW is compared to, are simply God’s mouthpieceso—not in the secular sense of press secretaries but as spokespersons for God. And as such, their roles have sometimes been pastoral. In which case, they serve as God’s shepherds, pointing out the people’s waywardness with the aim of bringing them back to God. The prophet Amos, for example, fits this role. At other times, the prophets’ pivotal roles have been foretellers or “predictors” of a distant future. The apocalyptic writer of Daniel falls into this category in predicting a future much further ahead than any of his contemporaries could comprehend.

There are also biblical prophets who combined these roles of shepherding and sometimes foreseeing events that were very disruptive to Israel. This was Jeremiah’s lot.  He had the unenviable task of warning a people unaccustomed to foreign domination and exilic life. And convincing the populace that it was God’s plan to use their enemy, Babylon, as an instrument of punishment, was no mere task. As Jeremiah was predicting doom, he was also counseling the Israelites to believe in God’s goodness and to trust his overall providence.

These dual roles, of shepherding the flock and providing a “road map” to future eschatological events, have been core to EGW’s prophetic legacy. And her pastoral ministry to the church she co-founded ran the gamut. It is impossible to evaluate Adventist education, healthful living, or evangelism and not be impressed by how much has been accomplished under her guidance.

In education especially, no comparable denomination has done more globally than Adventism. Wherever the church has gone, it has established schools, ranging from the one-room elementary to accredited universities offering tertiary degrees. Although first generation Adventists are generally among the least educated, because of the church’s educational emphasis, succeeding generations leapfrog the ladder into ranks of those most educated. With almost 8,000 educational institutions in over 100 countries, the church can be justifiably proud of its accomplishments in this area.

To a similar, though less expansive extent, the church has made significant contributions to healthful living, and healthcare generally. Through its numerous clinics, healthcare centers, and many first-class hospitals in the U.S. and around the world, the Adventist healthcare brand has achieved an enviable reputation. The co-mingling of Adventism and healthful living has long been an integral association, one established long before vegetarianism caught the popular imagination. As with education, the Adventist healthful living success story cannot be fully told without recognizing EGW’s contributions.

But using accomplishment as barometer for prophetic authenticity is tricky. As the LDS story illustrates, Mormons could make claims to Joseph Smith’s legitimacy based on comparable accomplishments under their founder’s guidance, such as a worldwide presence, fine institutions, and temperate living. Many LDS members view the church’s historical connection with Utah as prophetically guided. Therefore, an examination of EGW’s other prophetic role, as foreteller of future events, could provide a better measure to assess whether her 19th-century, end-time predictions are unconditional.

And here I would indulge a brief digression to comment on whether EGW can be legitimately criticized. Some get righteously indignant when EGW is studied objectively, in a non-apologetical manner. For them, EGW’s role should be a settled matter, in much the same way biblical authors are. But this is not a helpful approach because each new generation of Adventists should discover her for themselves, in their own way. This means they should come to know her, warts (if any) and all. In matters of religion, we must resist the temptation to uncritically absorb a superficial inheritance of the tradition without a diligent involvement in the acquisition. Faulkner’s insistence is right: “The past is not dead. It’s not even past.”  His is an astute recognition that time and events do not stop but continue in the lives of later generations. We should neither be reluctant or apprehensive about interrogating our past, including Ellen White. Our history stretches back over 175 years and should be open to scrutiny.

But back to the task at hand. Virtually all traditional Christian denominations profess that Christ will return, as scripture attests, in the future. What is contested are the markers of that future event. What makes our Adventist eschatological outlook different and proprietary are key extra-biblical details we subscribe to. Our end time chronology consists of important pre-advent events, including the Investigative Judgment (IJ) in heaven. Our IJ doctrine postulates that since October 1844, God has been “going through the books” of everyone ever born, in judgment of their deeds, to determine their salvation suitability. Christ will return only after the end of this process, labeled “the close of probation.”

Also, a National Sunday Law must be passed before Christ returns. It is unclear if it will be passed only in the U.S. or globally but, when it does, the law will mandate Sunday worship exclusively. The promulgation of this Sunday Law will signal that Apostate Protestant churches have joined the Catholic Church and ceded power and authority to the Pope, and these joined powers seek our destruction. We will be persecuted because of our continued allegiance to God through faithful Sabbath observance. When this law passes, the faithful should start heading for the mountains.

These fine details are what make our eschatology different and “special” — but also problematic—problematic because some of these positions, acquired predominantly via EGW’s prophetic gifts, clash with the evidence from our own stubborn senses. In a recent conference in Rome, attended by some 360 Adventist theologians and administrators under the aegis of the General Conference Biblical Research Institute, the attendees sought to “affirm biblical eschatology” from an Adventist perspective. In the conference consensus statements, no mention was made of Ellen White. I can understand the attempt to carve out an SDA eschatological position from the Bible alone, but this is a difficult undertaking because most of our distinctive eschatological positions come to us, extra-biblically, through EGW.

When we take Adventist eschatology seriously, we cannot escape some nagging questions: 1) Do we still hold to the view that, in this age of supercomputers, the 19th-century accounting and auditing metaphor derived from the book of Hebrews describes the literal heavenly process where God is painstakingly reviewing our records—a task which must be completed before he returns? 2) Do we still envision the passing of a National Sunday Law in the same way and urgency that EGW and our founders did? 3) Will the world’s power brokers — Apostate Protestants, Muslims, Hindus, secularists, global political governments — align with and become subordinate to Papal Rome? 4) Will this “cabal” force us to flee up into the mountains?

This admonition to flee appears particularly dated because of the obvious conceit from our 19th-century beginnings when mountains and mountain-tops were symbols of safety. But it has ceased to symbolize the security that mountains once signified. In our time, and no doubt going forward, how safe will the mountains be against our enemies’ satellite photos, missiles, warplanes, and drones?

Though we do not profess knowledge of the Second Coming’s exact date, we currently endorse the view that all these events will take place before Jesus comes. Usually, God raises up prophets in response to specific societal needs. And when the prophetic function is predictive, the prophecy is often conditioned to the response of its targets, as was the case with Jonah. But EGW’s end time predictions come with no conditional constraints. So, regardless of time and circumstance, is it really certain that the Sunday Law will happen, the global alliance against the church will take place, and the faithful will be chased into the mountains?

Because EGW made these statements over a century and a half ago, even though the landscape has shifted considerably, in the view of many Adventists, we cannot, dare not, reappraise her assertions, or we will be accused of opposing her prophetic authority. She subscribed to conditional prophecy and the idea of present truth, two concepts which should allow for adjustments when contingencies in our theological outlook call for changes. But because we refuse to make any adjustments, we have inadvertently bound the Lord to her 160-year-old predictions.

This is less an Ellen White critique than it is a criticism of how we have shaped her. By discouraging meaningful discussions, particularly in official church communication channels — ANN, Adventist Review, Ministry — we have created an unsustainable, inerrant posture toward her that does not serve the church well—a posture, I suspect, she would have found repugnant. At the very least, we should encourage engagement by the total church, especially within its academe, about whether EGW is the last of God’s prophets who has written the last chapter on end times, for all time. Or must God raise up another who will update her predictions?