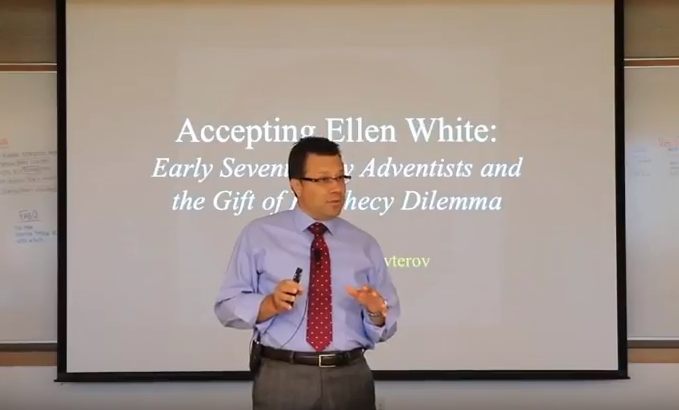 The most important word in this title is “dilemma.”*

Two-thirds of those whom we recall as the “founders” of the Seventh-day Adventist denomination initially accepted her and one-third did not. James White and Ellen White comprised the majority and Joseph Bates made up the minority.

Bates eventually accepted White as well because he witnessed her perform what he took to be a miracle. Unfortunately, as Ellen White sometimes subsequently said, in her own words, being convinced by a miracle is one of the worst reasons for believing anything. The evidentiary value of miracles is zero. I will say more about this at the end of this report.

Levterov is the Director of the Loma Linda University Branch Office of the Ellen White Estate at Loma Linda University Health where he also serves as an Associate Pastor in the School of Religion. Not all that long ago, he arrived in London from Bulgaria not knowing a word of English. While doing odd jobs and eventually becoming an entrepreneur in order to keep alive, he learned the language and earned a BA in theology from Newbold College. He then moved to Andrews University in Michigan where he earned MDiv and PhD degrees in Adventist history under George Knight. He completed his dissertation, which Peter Lang published in 2015, while pastoring in Texas. This book is drawn from it.

Because the video of Levterov’s second presentation at the Roy Branson Legacy Sabbath School was accidentally erased, this link is only to the first one. I recommend purchasing and reading the book!

As Levterov describes it, the “dilemma” about Ellen White which the earliest Adventists experienced flowed from their different backgrounds. The “Shouting Methodists” and other charismatics were often enthusiastic about her visions. Almost drowning in the emotional excess which was frequent in the Revivalism of the time, they could identify at least five “prophets” in and around Portland, Maine. Four of them were women and one of these was Ellen Harmon.

James White was representative of those from the Christian Connection. Their devotion to the Bible prepared them to believe that all the “Gifts of the Holy Spirit” were possible in each era of Christian history. Although they believed that this included the “Gift of Prophesy,” and that it would probably would be manifest more often in the “Last Days,” they were decidedly cooler and more cautious.

Although many “followers” in the Millerite Movement were “for” visions and other forms of religious ecstasy, William Miller and most of the other Millerite leaders could not have been more “against” them. William Miller saw “no reason for the working of miracles in this age.” According to Levterov, “Joshua Hines, Sylvester Bliss and others made similar personal pronouncements.”

In addition to these personal reservations, the Millerite leaders officially rejected “visions or dreams, mere impressions, or private revelations,” as one of their declarations put it, in meetings which took place in June of 1843, May of 1844, November of 1844, March of 1845 and May of 1845. The leaders of the Millerite movement were of the same conviction about this before and after the Great Disappointment on October 22, 1844.

As Levterov traces it, the early Adventist full acceptance of Ellen White as an expression of “The Gift of Prophesy” was a gradual process which he divides into what we can call “Four Stages.” The dates for these are convenient approximations.

In Stage I, the years before 1851, the Sabbatarian Adventists accepted her and justified doing so for both biblical and pragmatic reasons.

Stage II occurred between 1851 and 1862. It was devoted primarily to defending her from criticisms from smaller groups within the Advent Movement such as the “Messenger Party” and “The Age to Come” group.

Stage III started in 1863 and ended in 1881. Much energy was devoted to defending Ellen White from external critics and from former leading SDA ministers. Chief among these were B. F. Snook and W. H. Brinkerhoff who swerved out of denominational thinking, back into it, and then out for good.

Levterov allocates seven years, 1882 – 1889, to Stage IV. This was a period of refining the denomination’s thinking about Ellen White, especially in light of two somewhat new criticisms. The first charge was “suppression.” It was that, in subsequent publications of Ellen White’s writings, denominational leaders deleted things she had written which were no long plausible, if they ever were. In 1883, A. C. Long developed this criticism in a sixteen page tract titled Comparison of Early Writings of Mrs. White with Later Publications.

The second charge was “plagiarism.” In 1888, D. M. Canright published Seventh-day Adventism Renounced. It summarized virtually all of the previous objections to Ellen White and then added this somewhat new one.

After going into much more detail, both about the objections to Ellen White and the denomination’s responses to them, Levterov’s conclusion is important. “By the end of 1889,” he writes, “all of the major arguments for and against the prophetic gift of Ellen White were in place. Subsequent arguments for or against her gift were simply a repetition or modification of the old argumentations.”

In his discussion of what I have called Stage III, Levterov helps me to answer a question I have had since 1963–64, my last year of secondary education at Pacific Union Preparatory School. This question came to my mind back then when someone from the Ellen G. White Estate made a case to those of us who were students for Ellen White being a true prophet of God because her visions told her who had stolen a hairnet from her and then burned it out of fear of being caught. Either then or at some other meeting, we were told that at least once she had held a heavy Bible with an outstretched arm for an amazing length of time, that when she was in vision her eyes seemed fixed on something heavenward, that her body was rigid even when she was standing, and that when people around her held a mirror to her mouth, they could tell that she was not breathing.

My reactions to these stories when I was seventeen or eighteen years old are the same as they are now. They were based upon what I had already learned from my own reading of Ellen White or what I had learned from others: 1) I very much doubt that these events occurred precisely in every smallest detail as they have been related to us. 2) Even if they did, they should neither add to nor subtract from a case on behalf of Ellen White in view of the fact that she tells us not to trust in miracles. Even the devil can perform them. If you don’t believe in the devil, watch “Britain’s Got Talent” or “America’s Got Talent” for purely human “miracles.” 3) Given what she clearly says on the subject, I did not know why the Ellen White Estate dispatched people to tell these stories. I’m guessing that it has long since stopped this practice and for good reasons.

How intrigued and illumined I was to learn from Levterov that at first the Adventists did not put such stories front and center because they preferred to appeal to biblical and pragmatic evidence! They soon began to make a lot of them in response to the charge that Ellen White could not have been a true prophet because her visions were not accompanied by obvious evidences of the supernatural.

By the mid-1860s, Levterov wrote, “Seventh-day Adventists began to point out, forced by the critics, that Ellen White had supernatural manifestations” (emphasis mine). These early Adventists continued to recount what Scripture says; however, it seems to me, these stories in many circles eventually eclipsed the biblical materials. Almost a century later, those of us who were high school students just a few short miles from Elmshaven, Ellen White’s last home, were told them and virtually nothing about what the Bible says.

Some might think that in fact the White Estate taught us what the Bible says but that I recall only these stories. My response is that this is possible but that I know for certain that the representative of the Ellen White Estate did not teach us what the Apostle Paul wrote in the New Testament’s oldest document:

Do not quench the Spirit. Do not despise the words of prophets, but test everything; hold fast to what is good; abstain from every form of evil.” —1 Thessalonians 5: 19 - 22 NRSV

*This is the first of a series of videos about early Adventism and Ellen White which have been selected from presentations which were recently made at the Roy Branson Legacy Sabbath School in Loma Linda, California.