The Irony of Empire

The Irony of Empire 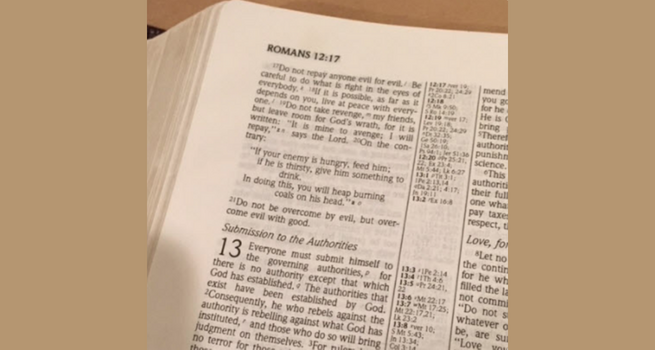 There is a certain sadness, a disappointment, an anger, and a rage that comes from focusing on the idea that it was ever the policy of our nation to purposefully and intentionally separate children from their parents and indefinitely lock them in cages. While those emotions are very real and there is a modicum of relief that Trump rescinded the policy last week, what fascinated me most was Attorney General Jeff Sessions’ use of the Bible to justify this type of horror.

What many people do not realize is that the fight over Romans 13, the verses cited by Sessions, is not a new one. I spent a significant amount of time deconstructing Romans 13 in my dissertation. The verses at the beginning of that chapter are often used to justify the breakdown of the separation of church and state by those who would like to see this country’s laws be more Christian. I went back to look at what I said about that set of verses, in light of Sessions’ blatant misuse. Romans 13 is sometimes used by Christians who want to uphold the status quo.1 They use Romans 13 to determine whether the duty to submit to governing authorities gives the Christian a duty to make sure government is in line with God’s principles. Both of those uses in my estimation are problematic. Most conservative Evangelicals, steeped in the misguided belief that America is somehow a Christian nation, would disagree. What I found, however, is that while Sessions is making the same general mistake as these other misguided interpretations, he is making that mistake in a different way.

Sessions’ misguided analysis of Romans 13, from an intellectual perspective, is about the failure to consider context. Romans is Paul’s letter to a small sect seeking to survive in the seat of the Empire. Paul’s counsel for that little church essentially is to keep their heads down. For that reason Paul switches from discussing the authority of empire in the first couple of verses to discussing right and wrong in the next set of verses. Paul’s advice is that members of the church should do the right thing regardless of the laws of Empire and that they have nothing to fear if they are doing the right thing. What they should not do, for example, is not pay their taxes because they are now members of God’s kingdom (see verse 7). The problem with Sessions’ use of Romans 13 is that he is a representative of the Empire! The Empire does not get to use these words to cajole the subjugation of a people who are not even being addressed by those words. Those are words to the church by their leader, not from the Empire to a diverse cross section of people, some of whom will not hold to the principles of the church in the first place. But it occurs to me that Sessions may not be talking to us either. He may only be talking to those who will defend him simply because he cited a Bible verse and neither he nor they will think much further about it.2

Of course, the frustrating and angering irony of Sessions’ employing of biblical rhetoric is that he does not use the Bible to justify the substance of the policy. Instead, he uses the Bible to justify his power to create the policy and to demand that we acquiesce to it. Consciously or not, he is doing that because the Bible does not actually support his policy. As a strict separationist, I am no more a fan of using the Bible to support policies I agree with than I am of using the Bible to justify the policies with which I disagree.3 But it is interesting to note that, on this question, the Bible has what seems to be clear counsel. In a general sense, Stephen Colbert is correct—Sessions’ argument on how to treat those from a neighboring country is undercut within the very chapter he cites. It also appears that even in the one theocracy in the Bible God calls for the Israelites to treat foreigners better than we are. You would think someone who is arguing that the Bible should undergird our policy would be cognizant of that.

American Christianity has had a bad last few weeks. A couple of weeks ago, much of American Christianity celebrated the right to treat people as less free than ourselves. Last week, one amongst us used our texts to justify cruelty for cruelty’s sake, and some of us celebrated again. It is getting harder and harder to justify why anyone should want to join such an institution. That may be an overstatement, but at the very least, I can say this—I believe we have lost our way. Our purpose. Our reason for existence. When any segment of us can celebrate discrimination, when any among us can celebrate the use of power with pain and cruelty as our ends, we are no longer the movement seeking to introduce people to a kind and loving God who died to save all.

1. The Washington Post article cited gives two good examples—loyalists to the British crown during the Revolution and supporters of slavery in the Antebellum period.

2. And this is not even mentioning what he said after, which is even more disturbing: “Orderly and lawful processes are good in themselves. Consistent and fair application of the law is in itself a good and moral thing, and that protects the weak and protects the lawful.” I don’t think I need to explain how that is a problematic belief to hold.