Should Ted Wilson Run for a Third Five-year Term?

Should Ted Wilson Run for a Third Five-year Term? 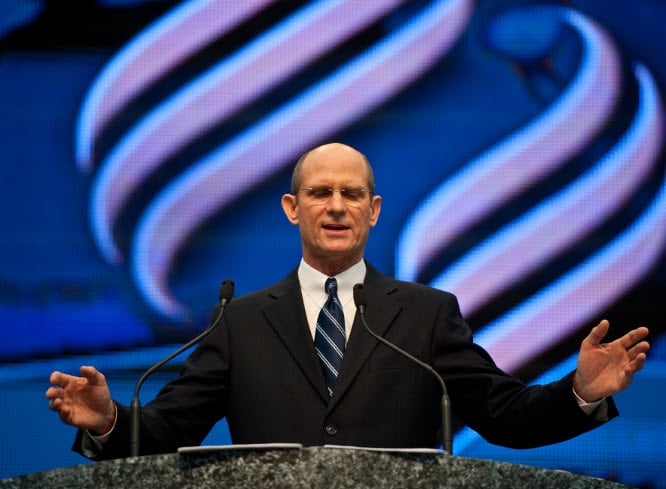 Elder Ted Wilson (TW), president of the Seventh-day Adventist Church’s General Conference (GC), is 68, and when his current term is up in 2020, he will be 70. At that time, he and the church must decide whether he should continue to lead or step down. It may seem premature to discuss a potential issue that is two years away. I think otherwise and maintain that this is the right time to start a conversation about our church's future direction. If we wait until 2020, it may be too late for a measured assessment of the situation.

Let us begin by reviewing presidencies and presidential terms since 1863 when we incorporated as a denomination. We have had 20 presidencies and 17 presidents—all men, of course. James White served three non-consecutive terms, and George Butler served two. James’ total was 10 years and Butler’s 11. The longest serving president was A. G. Daniells (AGD).  He led the church for 21 continuous years (1901-1922), 14 of which while Ellen G. White (EGW) was alive.

To what could we attribute the increasing length of presidential service that started with AGD? How did we go from four years to twenty-one? There are many reasons, but it could be argued that leadership instability and quick turnover is typical in the early years of any movement, especially one that grew out of the 1840s Millerite disappointment. Others could point to EGW’s influence and shadow leadership for the shorter tenures that occurred during much of her lifetime. At the beginning of AGD’s presidency, EGW was 73 and in decline, compared to AGD’s prime—43 years. Whatever the explanations, after AGD, a 10-year average presidency has become the norm.

AGD’s 21 consecutive years in office, followed by William Spicer’s eight, might have ruffled feathers within the church hierarchy because, at the 1931 Autumn Council, the delegates put some checks in place. They overwhelmingly adopted a resolution that limited the tenure for executives in the same position. The preamble was as rebuking as the resolution it heralded was unambiguous:

Whereas: Our experience has proven that very long tenure of office in the same position is not for the best interest of the work . . .

Resolved: That the tenure of the office for General Conference executive officers and heads of department (including divisions) shall not exceed twelve consecutive years in any one position.

This policy has been honored by subsequent GC presidents, at least in spirit, since this resolution. James McElhany served 14 years, but he inherited two years from Charles Watson’s term. After term lengths changed from four to five years in 1970, tenure has come to mean two consecutive five-years, plus any inheritance from a predecessor, as happened with Neal Wilson and Jan Paulsen. For forty years, no GC president has run for three terms or fifteen years. If TW attempts it, he will be the only one in fifty years to violate this rule, among five presidents who faced the same situation. Should he “run,” “win,” and serve out a third term, he would become the longest serving GC president since AGD.

Despite the 1931 resolution, the church has retreated from enforcing a global policy on tenure. Each division has been granted the authority to pursue what works in its territory. Consequently, the approaches have been many and varied. For example, in the West-Central Africa Division (WAD), tenure is essentially side-stepped by the division-wide policy on retirement, which is pegged at 65 years. Conference, union, and division leaders in this field have historically come to these roles in their mid-50s, which renders serving fifteen consecutive years in one position moot. The Inter-American Division has no formal tenure restrictions, but for almost 70 years, until the recently retired Israel Leito took office in 1994, no president had run for more than three four-year terms. Similarly, the North American Division takes no division-wide position on tenure, leaving the unions and conferences to carve out separate and widely different policies. Though applied inconsistently, the overall trend in tenure arrangements at the GC and around the divisions is that executives have abided by the three four-year or two five-year terms.

But are we now in uncharted territory?  Would the church’s highest office holder disregard tradition and push the envelope? It is important to have an open discussion about this potential step earlier rather than later. And we are fortunate that EGW commented on this subject. She writes:

I have been shown that ministers should not be retained in the same district year after year, nor should the same man long preside over a conference. A change of gifts is for the good of our conferences and churches. (Gospel Writers, 420)

Who says EGW lacks a sense of humor? She offers an explanation for why a church pastor or administrator should not camp too long in the same position:

The churches become accustomed to the management of that one man and think they must look to him instead of to God.

Now to the central question: At 70, should TW run for a third presidential term in 2020?

Not because he is 70 and will be 75 at the end of a third term. Jan Paulsen was re-elected to his second term when he was 69. Technically TW should not run for a third term for the simple reason that doing so breaks precedent, and precedent is something Wilson generally supports. A third term also goes against an I have been shown counsel from EGW. However, sometimes the most ardent EGW apologists ignore her advice when expedient.

The most important reason TW should rule out a third term is that he has not been good for the church. He has failed the cardinal test of leadership—to do no harm to the body. The GC president’s role is primarily administrative. If the church were a corporation, it would be the envy of the multi-nationals because it has presence in over 90% of countries worldwide. As CEO, one of his principal duties is to grow the church and keep its various entities in harmony. This calls for diplomatic skills and for being adept at keeping the church machinery well-greased and at full throttle with a shared vision.  Wilson has neither been the diplomat nor held the church together. He has instead been the most divisive GC president since his father, Neal, who was president in the 1980s and embroiled us in the Glacier View and Merikay Silver controversies. TW is forever married to his opposition to Women’s Ordination (WO). Historians will see this president mainly in the light of his single-minded resistance to WO and the extraordinary steps he has taken to prevent it—a stance that is anachronistic at best, bigoted at worst.

His authoritarian impulses are well-documented. They range from the petty to the mystifying. Recall his refusal to include the name and title, in the church directory, of a duly elected leader, simply because the President of the Southeastern California Conference, Pastor Sandra Roberts, is a woman. Or when he repeatedly warned of “dire" or “grave” consequences when autonomous unions voted to ordain ministers regardless of gender. Add to these his insistence that church leaders sign a “loyalty oath” which, if infringed, would signal “disloyalty,” thus earning the violator loss of voice and vote during official church deliberations. He lost that fight, badly, but TW is not one who retreats in the face of “minor” setbacks. So at this fall’s Annual Council meetings in Battle Creek, Michigan, the “loyalty oath” issue will be back on the agenda. Under his leadership, the church seems to be under constant siege, held hostage to one man’s crusade against 65% of our membership.

In the past eight years, TW has shown little concern that his tactics, which have opened a significant gap of mistrust between the church in the global North and South, was risking a split. Indeed, he seems to welcome one, much like the Last Generation Theology (LGT) faction within the church, that views a split as a welcome winnowing that will separate true and false Adventists and hasten the Lord’s coming. He might not have stoked the polarizing fires in the North-South divide, but he has done little to douse the ensuing flames. Decisions he has made throughout this conflict have only deepened the rift.

Our church is composed of people in all walks of life: highly and barely educated, poor and rich, rural and urban, liberals/progressives and fundamentalists/conservatives — from all cultural backgrounds. It takes an administrator conscious of this dynamic to understand that unity cannot be forged in a group this diverse by imposing conformity. Yet whether in areas of theology, such as our understanding of creation, or others such as WO, where the church has no stated fundamental belief, TW has attempted to impose a much narrower view—which has separated us. He has done this for eight years. And in two years it will be ten.

We observe from history that in free, open-member organizations such as churches, when power is left too long with the same individual(s), influence imbalance increases with time. There is no good reason to re-test this hypothesis.

It is not healthy that influential voices within church employment can only openly disagree with the direction of this GC leadership after they retire. We cannot blame them, at least not entirely, when the ever-present threat of “loyalty pledges” is held, like Damocles’ sword over dissenting leaders’ heads. It needs repeating that ours is, or should be, an open community whose members have voluntarily come together in fellowship and have equal rights to safeguard our church’s welfare. We should not encourage an atmosphere where threats of “consequences,” serious or not, are viable tools to silence constructive criticism.

When so much energy, time, and treasure of two five-year terms has been dedicated to preventing women from offering their utmost talents in his service, allowing this crusade to continue for five additional years will make us all complicit. What the church needs, going forward, is an impartial arbitrator, an executive who, though having personal leanings about divisive issues, will listen to other views and be willing to compromise and deal fairly with all sides. The days of pettily refusing to include in church directories the names of elected officials he does not approve of needs to be behind us.  Wilson should listen to the voice of the revered Ellen White. He should not play coy with this issue and keep the church guessing but rather declare his intention to step down—for the good of the church we all love.