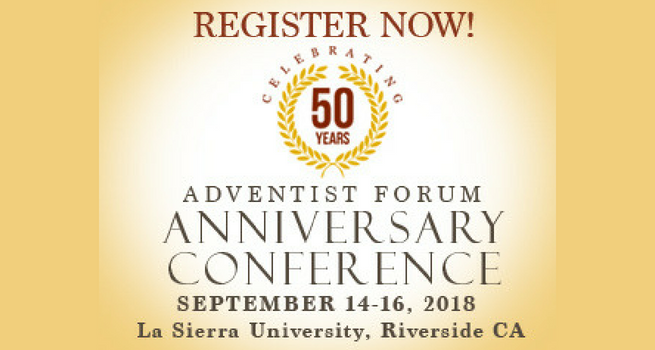 What a year 1968 was. It started with the Tet Offensive in Vietnam that was such a disaster for the United States. In March, Lyndon Johnson announced that he would not run for re-election. In April, Martin Luther King, Jr. was assassinated prompting riots in 100 cities. Then in June, Robert F. Kennedy was assassinated. The summer Democratic Convention in Chicago saw more riots both outside and inside the convention hall where Hubert Humphrey and Edmund Muskie were selected as the presidential and vice presidential candidates to run against Richard Nixon who won the November election.

Within the North America Adventist community that year, creative graduate students were holding meetings on university campuses in Massachusetts, Michigan, and California. They decided to work together and formed the Association of Adventist Forums. They initiated conversations with the church organization and received an official blessing for their efforts that soon came to include the publishing of Spectrum. From its first issue, the journal featured discussion of controversial issues, such as the Christian response to war. Creation was a major topic, so too evolution, Ellen G. White, church finances and structure, the lawsuit of Merikay Silver and Lorna Tobler against Pacific Press. But there was also celebration of the topic of Sabbath, of Revelation, of the creativity of Adventist writers, artists, theologians, and academics.

Fifty years later, while there is much to remember, there is also much to expect in the future for the organization that pioneered the publishing of independent Adventist news. Adventist Forum plans to celebrate those “Perspectives, Stories, and Expectations” at its conference September 14-16, 2018, on the campus of La Sierra University in Riverside, California.

Historians Terrie Aamodt and Jonathan Butler will open the conference with presentations that consider what it means to write about Ellen White. Both are at work on books about the Seventh-day Adventist prophet. Aamodt is the first woman historian to write a biography of Mrs. White.

On Sabbath, as the topic turns to women in ministry, Kendra Haloviak Valentine will provide historical context for this ever-changing subject within Adventism. La Sierra University Church Pastor Chris Oberg will bring the morning’s worship homily.

A documentary about Roy Branson, the long-time editor of Spectrum, will be premiered on Sabbath afternoon in the Session where several Adventist Forum pioneers will be featured in a panel moderated by David Larson.

A gala celebration of Adventist Forum will be held Saturday evening at the Brandstater Art Gallery where an art exhibit of the works featured on the covers of Spectrum will be on display. It promises to be one of the most wide-ranging exhibits of Adventist art ever.

Science Sunday presentations will begin with an overview of Adventist science by James Hayward. Hayward edited the book Creation Reconsidered published by Adventist Forum. Fritz Guy and Brian Bull, authors of God, Land and the Great Flood, will provide the biblical portion of the day’s discussion. Geologist Gerald Bryant will speak about the way we interpret the geological record, followed by April Summitt who will bring the conversation to the present day concerns of water conservation in the West.

Renowned musical soloist Anthony Leon will be featured at programs throughout the weekend.

“We look forward to time together with Adventist Forum members, authors, scientists, and artists,” says Charles Scriven, president of the Adventist Forum Board of Directors. “As we celebrate the past we will also look to the future, and discuss our expectations for the years to come.”

Registration is now open for the Conference. Click here to register.