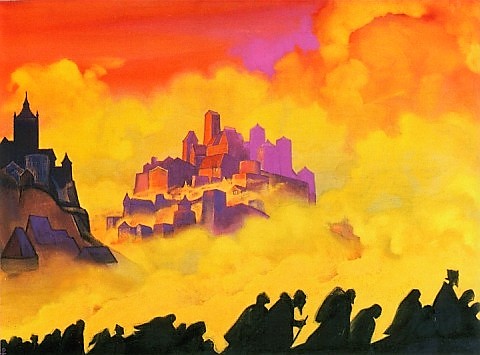 The word “Armageddon” has entered the mainstream of world culture to depict an overwhelming threat to the very existence of planet earth. The popular 1998 film Armageddon portrayed a bunch of rag-tag messiahs who team together to attempt to destroy a rogue asteroid the size of Texas, which is on a direct collision course with earth. (Needless to say, the mission was successful or else you wouldn’t be reading this right now)!

Popular evangelical writers like Hal Lindsey (who wrote the Late Great Planet Earth in the 1970s) have attempted to identify current events with the unfolding of Bible prophecy. The usual interpretation of Armageddon and the end of the world focuses on a real military battle in the Middle East between the forces of good and evil. In this regard, the focus has shifted from Russia to Muslim extremists as the main protagonist.

The word “Armageddon” only appears one time in the Bible, between the sixth and seventh plagues: “Then they gathered the kings together to the place that in Hebrew is called Armageddon” (Rev. 16:16). John provides a possible hint to the meaning of this unique word by specifically telling us that it is of Hebrew and not Greek origin.

This immediately points to the Old Testament as a strong foundation for the meaning and understanding of the term. Thus, if we are to understand the term, we must first look in the historical and theological past of Israel rather than in the possible present unfolding of events.

The Sabbath School lesson remarks on Tuesday and Wednesday by Norman Gulley represent, I think, a good understanding of Armageddon. He points out that,

There are many parallels to this noteworthy Old Testament story and the many-sided battle that will wage at the end of time.

First of all, the prophets of Baal are sponsored by the state through the devilish influence of Jezebel, the heathen wife of Ahab. She is a fit representation of the end time Babylon who is pictured as a prostitute, drunk with the blood of the saints (Rev. 17:1–6). Just like Jezebel used the power of the state to enforce a false worship against God, Babylon is seen joining together with the Lamb-like beast of Revelation 13 in order to trample down religious freedom for all and dictate a state-supported and a state-run religion.

The modern Jezebel/Babylon has even taken a play out of God’s playbook and it is said she will cause, “fire to come down from heaven to earth in full view of men (Rev. 13:13).  Some have seen that this “false fire” is a false manifestation of the Holy Spirit, not only at Mount Carmel but at Pentecost. Revelation warns us that Babylon will use deceptive fire and miracles in order to convince many that she is of a divine rather than a Satanic influence.

We are instructed by Ellen G. White:

The way in which Christ worked was to preach the word, and to relieve suffering by miraculous works of healing. But I am instructed that we cannot now work in this way; for Satan will exercise his power by working miracles. God's servants today could not work by means of miracles, because spurious works of healing, claiming to be divine, will be wrought” (Medical Ministry, page 14).

Just as Elijah was called to stand up against the united political and religious monolith of his day, we are also called to sound a warning against the union of church and state that is forming, even now as we speak. We are again instructed that

The "image of the beast" represents that form of apostate Protestantism which will be developed when the Protestant churches shall seek the aid of the civil power for the enforcement of their dogmas (Great Controversy, 443, 445).

Although Elijah appeared to be alone, God reminded him in his flight after the Mount Carmel experience, that there were many who had not bowed the knee to Baal. And just as Elijah was taken to heaven without seeing death, we are reminded in the verse just before the Battle of Armageddon, “Behold, I come like a thief! Blessed is he who stays awake and keeps his clothes with him, so that he may not go naked and be shamefully exposed” (Rev. 16:15).

Let us not be unmindful of the days we live in and continue to be lulled to sleep by the devil but heed the words of Paul and be ready when the battle comes,

But you, brothers, are not in darkness so that this day should surprise you like a thief. You are all sons of the light and sons of the day. We do not belong to the night or to the darkness.

So then, let us not be like others, who are asleep, but let us be alert and self-controlled. For those who sleep, sleep at night, and those who get drunk, get drunk at night. But since we belong to the day, let us be self-controlled, putting on faith and love as a breastplate, and the hope of salvation as a helmet. (1Thess. 5:4-8).