End-Time Events and the Last Generation: An Interview with Dr. George Knight

End-Time Events and the Last Generation: An Interview with Dr. George Knight 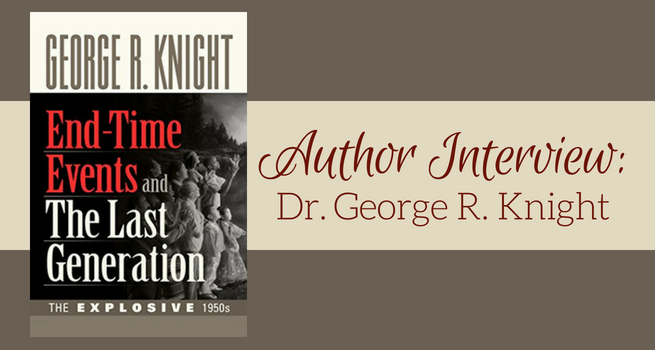 Dr. George Knight, well-known historian, theologian, educator, speaker, and writer has recently released End-Time Events and the Last Generation: The Explosive 1950s. This is the 93rd book either written or edited by Dr. Knight—(48 authored, 45 edited)! His books have made their way into just about every country of the world.

Question: Dr. Knight, the tone of this book seems to indicate that the subject is a very personal one for you. Why is that?

Answer: In many ways, the book is extremely personal since I have struggled with these issues ever since I became an Adventist in 1961. At first, I heartily accepted "last generation theology" and soon after my baptism promised God I would be the first perfect (sinless) person since Christ. After eight years on that journey, I gave up, left the ministry, and thought I was finished with both Adventism and Christianity. But after six years in a "far country" I was converted to Christ as a Savior rather than primarily as an Example. The next year found me teaching at Andrews University for a 30-year stint during which a great deal of my writing dealt with topics related to last generation theology and helping people see its fallacies.

In a sentence or two, why should someone read this book?

People should read this book because it unmasks a very powerful deception that has led many Adventists into wrong paths. It should be read not only to escape a destructive belief system but to understand the controversial issues at its center.

What is the number one thing you would like readers to take away from this book?

The most important take-away is a firm understanding that Christ is our perfectly sinless Savior in all ways and that He wants to develop His loving character in each of His followers.

The issues in this book are both present and historical. In one way or another, Adventism has been struggling since the 1890s with false ideas of perfection and the role of the last generation in relation to the Second Coming. We need to rely less on Adventist tradition and more on the Bible's clear teachings.

You have spent your life speaking and writing about Adventist history. Have you seen changes over the years in how church members view our heritage? If so, are such changes having an effect on what is happening in the church today?

The good news about our heritage is that Adventism has become more open to looking at the facts of Adventist history rather than excitedly proclaiming apostasy on every side when someone does not line up with what have often been false understandings. In the past 50 years we have become less fearful of historical facts, even if they disagree with the "party line."

What do you think the Adventist Church will look like 50 to 100 years from now if the Lord hasn't returned by then?

If the Lord does not return for 50 or 100 years and if we continue on the same path, Adventism will be the most highly structured denomination in world history, our infighting will be more entrenched and institutionalized, and we will still be avidly proclaiming that we are God's remnant. But we will still be on earth.

Given your knowledge of the church's past, what do you feel is the most crucial issue facing the church today?

The most crucial issue facing Adventism today is authority. My impression is that, for a large sector of the church, the foremost authority is Adventist tradition, followed by administrative authority, the authority of the writings of Ellen White, and finally the authority of the Bible—in a descending order. Of course, no one openly admits the existence of such a hierarchy, but just listen to the ongoing discussion and you will see the flow of the argument.

What advice would you give to church leaders today as they seek to steer the church through the early 21st century?

My advice to church leaders today is to focus on the evangelistic mission clearly spelled out in Scripture and to spend less energy on defensiveness. After all, it is evangelistic offensive strategies that will win the war rather than rearguard defensiveness.

Ellen White has been, and continues to be, of tremendous significance to the Adventist Church. During her life, she played a crucial role in all kinds of issues then facing the church. Two questions: If she were to have appeared in the church today, rather than at its beginning over 150 years ago, would she be able to play a similar role today as she did during her life? Would she be accepted today as she was then? Secondly, if Ellen White were exercising her prophetic voice in the church today as she did back then, what do you think she would see as her most crucial message to the church?

In terms of Ellen White, I do not believe she would find acceptance if she were to appear today. We are too wrapped up in our traditions and administrative procedures. She would face off with Adventist leaders, tell them to stop playing games, and point us to our biblical mission—and even to new ways to accomplish it. I think her most crucial message in 2018 would be for Adventist members and leaders to quit their ongoing bickering and get back to gospel outreach through the power of the Holy Spirit.

End-Time Events and the Last Generation: The Explosive 1950s is available at your local Adventist Book Center, from the ABC online, and on Amazon. Click here to read the first chapter online for free.

Dale E. Galusha is president of the Pacific Press Publishing Association. This interview was provided by Pacific Press and originally appeared in its e-newsletter.