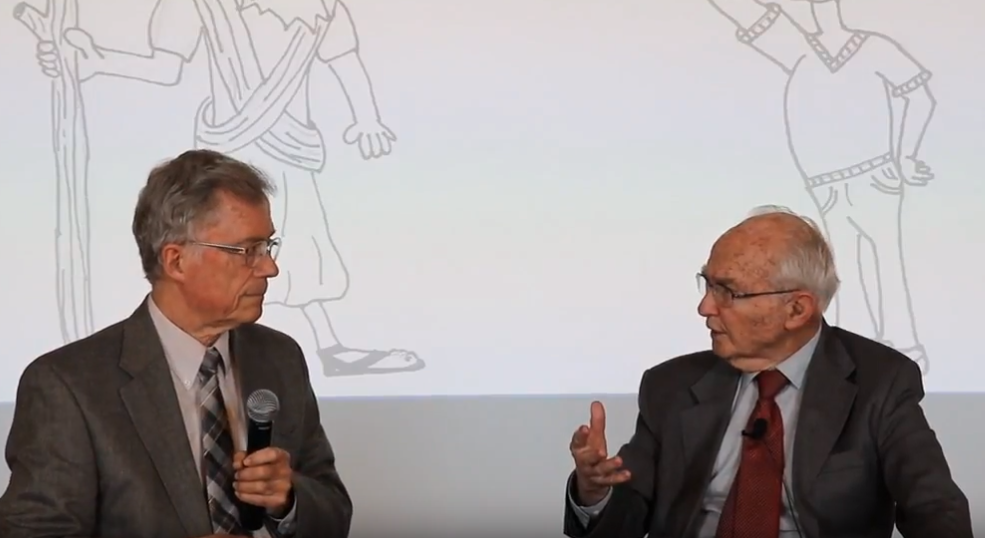 Perhaps we should say that Scripture is verbally inspired but that it is not verbally transcribed. This is one of the thoughts I carried away with me after Brian Bull and Fritz Guy made their second presentation at the Roy Branson Legacy Sabbath School about their book God, Sky & Land: Genesis 1 as the Ancient Hebrews Heard It (Adventist Forum, 2011). Watch Part 1 here.

Bull and Guy circled one of their claims so often that it almost became the hub of their entire presentation. This is that we can think with words and nothing but words. Wordless thoughts are impossible. We can feel without words but we cannot think without them.

I looked around the room during the time for discussion to see what questions the audience might ask the presenters. One individual asked the following:

If we say that God conveys thoughts to us in Scripture, and if we say that we can think only with words, doesn't this mean that in some sense the words of Scripture are inspired and doesn't this amount to some theory of verbal inspiration?

The terms "in some sense" and "some theory" are overwhelmingly important because we want to avoid two untenable conclusions. One is the suggestion of some mystics that the most intense experiences of God do not include thoughts in the ordinary sense of the term. The other is some parallel to the Muslim claim that God communicated to humanity in the Qu'ran in Arabic because this was the best language to do so, and that this is the language in which we should read it today.

Brian Bull graduated from the Loma Linda University School of Medicine in 1961. He works in Loma Linda, California and one other location and specializes in Anatomic Pathology & Clinical Pathology and Hematology.

Fritz Guy is a Seventh-day Adventist theologian and Research Professor of Philosophical Theology at La Sierra University in Riverside, California. He has worked as a college and university professor, an academic administrator, and a church pastor. In recent years, Guy has espoused progressive Adventist theology, with lectures and articles exploring the temporality of God, the hope of universal salvation, the theology of creation, and the morality of same-sex relationships. In a 1985 survey of North American Adventist academics, Guy tied for fourth place among the Adventist authors who had most influenced them. In 1989, Gary Chartier noted a widespread view that Guy "was the leading Adventist systematic theologian of his generation."

They have recently published a second book: God, Land, and the Great Flood: Hearing the Story with 21st Century Christian Ears (Adventist Forum, 2017).