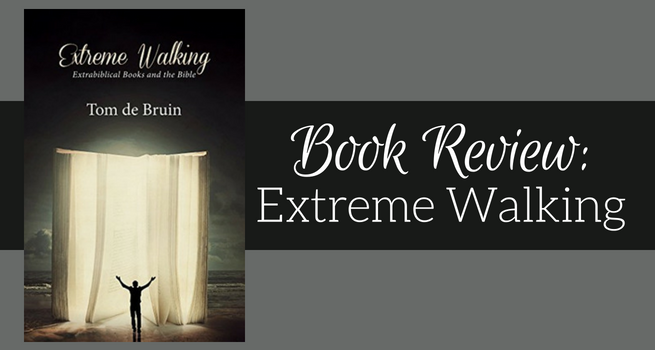 In what may be a historic moment in modern Seventh-day Adventism, Tom de Bruin, pastor and professor at Newbold College, has written a book dealing with and introducing the broad collection of writings known as the Pseudepigrapha. Published by Cascade Books, an imprint of Wipf and Stock, Tom de Bruin’s Extreme Walking: Extrabiblical Books and the Bible is set to cause waves within the church and cement itself as one of the leading works of its kind both for Adventism and the larger world of Christianity. In both cases, de Bruin must be thanked and congratulated for providing such a wonderful tool for the classroom as well as the many curious Christians who wish to walk off the beaten trail and discover wonderful new things in Scripture’s sacred pages.

Divided into two sections, consisting of “walks” and “breaks,” de Bruin guides readers on what he calls “Extreme Walking,” something inspired by his brother who often chose to forge a new trail on his hikes, choosing the unknown and difficult over the known and simple. Utilizing this philosophy, de Bruin applies it to the world of Second Temple Judaism and the New Testament, inviting readers to look at familiar passages in the New Testament with new eyes by examining relevant extrabiblical literature from the same period as they were written. With seven “walks” (or full chapters), he begins with the topic of Heaven and ends with that of the spirits. Intermixed amongst these “walks” are short chapters, consisting of only a few pages, which he describes as “breaks.” These breaks are intended to answer burning questions that may arise from the main chapters but are not the primary emphasis of the book.

What that means is that after exploring the popular cultural beliefs about Heaven that floated around the minds of those for whom the New Testament writers wrote, readers are treated to brief excurses on what those extrabiblical books were that they just explored and what sort of philosophy undergirds de Bruin and others in utilizing them to shed light on the Bible. At every point in this small book, it becomes clear that great thought has been placed into its organization, structure, and purpose.

What de Bruin has truly done is to write a brief and interesting introductory textbook that addresses issues that typically, under other circumstances, stretch across countless academic tomes. However, de Bruin’s choice to write in a conversational tone makes the work exceptionally accessible and inviting to the average Christian and surprisingly light and fun for students who are more used to slogging through a book than racing across its pages. This is one of this work’s greatest strengths, opening its world of discoveries to many who would otherwise find the walking path too cumbersome to continue trudging forward. In short, he has written a textbook that does not feel like a textbook, one that can easily be digested in a day or so.

Moreover, de Bruin writes with the assumption that his readership is made up of committed and believing Christians. Wherever possible, he uplifts a theologically powerful vision of Jesus and demonstrates how the period of the Second Temple helped to set the stage for the Gospels. Again and again, de Bruin’s love for Scripture shines through this book’s pages, enlightening readers so they see an entirely new way of understanding these sacred works.

While this book would make a fantastic addition to any Bible lover’s library, this work in particular makes for a wonderful addition to any classroom focused on the New Testament, Apocalyptic literature, or the Bible as a whole. It will not take the place of any other work one might use, but it will clarify and add no further burden to those students of a class for which it is added. A great conversation starter, it will help reorient students in preparation for more complex scholastic works that touch on the same or similar topics.

For all its strengths though, not everything in de Bruin’s work is perfect. Primarily, these minor imperfections are almost exclusively focused in the smaller lettered sections in which he attempts to tackle highly complex subjects in only two or so pages. These sections cover a number of topics such as “How We Got the Canon.” In my opinion, such issues cannot be simplified to such a short page count. If the background of Satan takes twenty pages, the story of how certain books were selected to be scripture is more demanding than a mere five pages can give.

However, brevity is not the only weakness in these minor chapters which act as the "B" side to his record of Second Temple hits. Spread throughout the work, he runs into trouble with some small but important historical details. Whether it is his discussion of the deuterocanonicals, where he argues that they were all written in Greek (when in fact we actually have copies of them in Hebrew and Aramaic), or that the Vulgate “automatically” included them (when actually, Jerome famously rejected most of them),1 or alternatively in his discussion of Pseudepigraphy, where he ignores scholarly disagreements,2 de Bruin makes a number of minor hiccups (56-57, 75).

Likewise, at one point, de Bruin appears to have mixed up his Hebrew when he states that the word Elohim does not always mean “God” but can be translated more generically as “heavenly beings” or “angels” (103). While it is true that Bene-Elohim (sons of God) can and is translated as the two terms suggested by de Bruin, Elohim can only mean “gods” or, in the context of biblical monotheism, “God.”3

While it might be considered a fault or a strength, de Bruin’s new work appears to purposefully avoid revealing the personal convictions or beliefs of its author and scholar. On many pages, de Bruin warns us as readers that “we want to use this extrabiblical knowledge to understand the Bible better” but that “we are not looking for ideas that we can add to the Bible, but ideas that can help us place the Bible better” (11). Again, he writes that “we are going to look at these extrabiblical books, but not to form a theology.” He says they are read only to help us understand the context of the New Testament writers and what they meant (21).

However, if one imagined that de Bruin wants readers to utilize their insights within their faith for more than historical knowledge, one would be mistaken. Consistently, after de Bruin guides readers through a better understanding of what the Bible is saying (in light of the Second Temple traditions it grew up within), he cautions his readers that they should not believe the things that they now understand Scripture to be espousing. How many heavens are there? It does not matter, nobody knows, not even the Bible writers (even if they claim that they did) (18). Does the New Testament teach that the dead are still living? Maybe, he writes, but maybe it is all just metaphorical, and if so, “this does not necessarily mean that these metaphors are truth” (92). After reviewing the Old Testament view of Satan, de Bruin asks: “Should we change our opinions of Satan? I wouldn’t.” Yet, he follows this with an admission of ambivalence, stating that he needs more time to think about such things (36).

Then there is the tricky situation revolving around the topic of “inspiration.” In what is one of the most surprising moves of the book, de Bruin affirms the Apocrypha or deuterocanonical works as inspired. He writes that “they may not be inspired in exactly the same way the Hebrew books were.” Nonetheless, he  appears to see them as comparable (57, emphasis mine). This makes him one of the few Adventists since Ellen White and the early Founders to make such claims. Elsewhere, he describes the broader pseudepigrapha as not being “inspired like the Bible is” but cautions that we should not ignore them (19-20).

Overall though, this begs a question: what is inspiration for de Bruin? How does authority work for him? He never answers that question, and quite frankly, he leaves readers confused by the end as to how they themselves understand such questions with regard to their own beliefs. Perhaps, this sense of ambiguity is exactly what he wished for, or perhaps it is the result of a biblical scholar still attempting to make sense in terms of “theology” what he already accepts critically in scholarship.

Regardless of its shortcomings, as small as they truly are in the big picture, no one should miss seeing de Bruin’s work for what it truly is: a fantastic work of both scholarship and faith. It serves an important purpose in current biblical studies and fills a wanting gap in the realm of accessible works on extrabiblical literature. While it cannot be uncritically accepted at face value and will not negate the need for further reading in more academically rigorous works, it is an excellent introduction for students, whether enrolled or in the pews, who wish to better understand scripture and need a less intimidating beginning to their journey than a larger book would provide. Teachers who are prepared to interact and fill in the gaps of the book can expect students to come to class ready to engage.

I know without a doubt, at least with regard to myself, that I will be assigning this book for any future classes I teach on these topics. And like de Bruin, I will be handing a copy to my mother who will find it just as fascinating as any university student will. I can think of no other works available that handle these sensitive issues with more care and ease than de Bruin’s. Likewise, as a fellow Seventh-day Adventist, I am excited to see others engaged in bringing to light these wonderful and largely ignored apocryphal texts. Adventism for almost its entire first century was actively engaged in such issues and questions. In the past century though, we have largely forgotten such ambitions. Voices like de Bruin’s keep me hopeful that Adventism’s overlooked heritage might be revived once more.

1. While Jerome did translate, upon request, the books of Tobit and Judith, he did not translate the rest of the collection, and it was later translators over the centuries who slowly added the missing works.

2. In de Bruin’s discussion of the phenomenon of Pseudepigraphy (75), he argues a well-worn position in scholarship that “there was no social stigma against the practice” but does not acknowledge the active debate over the topic within academia. The issue has recently been brought to task by scholar Bart Ehrman. See Bart Ehrman, Forgery and Counterforgery: The Use of Literary Deceit in Early Christian Polemics (New York: Oxford University Press, 2012).

3. While “gods” may be seen as literally “heavenly beings,” that phrase then cannot apply to anything less than a god. This undermines the entire argument de Bruin makes that the figure in Psalm 82 might be an angelic figure.

Matthew J. Korpman is a minister-in-training, writer, and published researcher in Biblical Studies. A graduate of the H.M.S. Richards Divinity School, he has four undergraduate degrees and begins his Master of Religion (M.A.R.) program at Yale University’s Divinity School this fall. More of his writings can be found at Patheos.com and in Spectrum.