Book Review: The Prophetic Imagination at 40 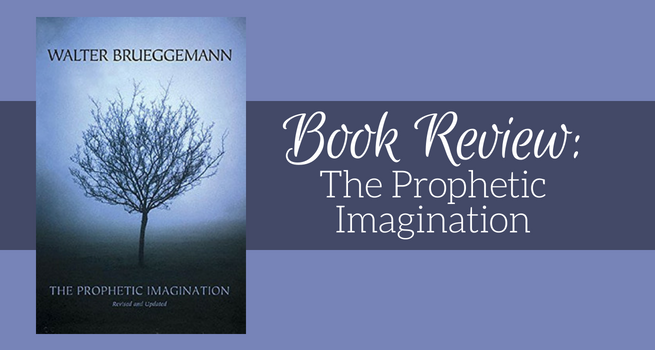 Walter Brueggemann’s The Prophetic Imagination is perhaps the best-known of the seemingly countless books of a writing and publishing career that has seen him established as one of the most prolific of contemporary Old Testament theologians. In its second edition, The Prophetic Imagination has sold more than 1 million copies, but this year marks the 40th anniversary of its initial publication—which seems as good a reason as any to revisit this remarkable work. However, it is also a book that still speaks powerfully to the role of faith and imagination in responding to the cultural and political powers that so dominate our consciousness and actions.

The Prophetic Imagination is a survey of the deeper role of the prophetic voice found in the leadership, action, and teaching of the key protagonists in the biblical stories of Moses, Jeremiah, and Jesus. As Brueggemann describes it in his original preface, this small book is “an attempt to understand what the prophets were up to, if we can be freed from our usual stereotypes of foretellers or social protestors” (page xxiii). Brueggemann thus dismisses the two most common approaches to the prophetic voice among Bible readers, instead seeking a deeper reading than that often adopted in conversations about biblical justice. But this is not to ignore the practical implications of the message of the Bible’s prophets, rather it prompts a more profound response—and in that sense, more practical response—to the powers that perpetuate injustice and destroy imagination.

Beginning with the story of Moses and his call to lead his people out of slavery and oppression in the land of Egypt, Brueggemann establishes a sketch of the powers that oppress all people and work to entrench and perpetuate that power. He describes this as a “royal consciousness” but one that is not only held by the ruling class but also presented to and insisted upon even among those it oppresses. As well as seeking to be all pervading, part of its mythology is the assumption of its inevitability, by which it seeks to preclude any alternative imagination or possibility. Thus, Moses’ call to the enslaved people was not merely to escape from Egypt and slavery but to begin to think that such freedom might even be possible. While this might seem less dramatic than a slaves’ revolt, this is actually the larger work: Moses’ “work is nothing less than an assault on the consciousness of the empire, aimed at nothing less than the dismantling of the empire both in its social practices and in its mythic pretensions” (page 9).

Brueggemann also uses the narrative of Moses’ confrontation with the oppressive powers of Egypt to emphasize the necessary link between faith and social justice. He does this by critiquing both extremes: first, that social radicalism by itself is a “cut flower without nourishment, without any sanctions deeper than human courage and good intentions” (page 8); but, second, that an unprophetic conservative faith offers a “God of well-being and good order” that too easily becomes “precisely the source of social oppression” (page 8). One way or the other, Brueggemann urges, “our discernment of God has remarkable sociological implications” (page 8). This is why Moses, Jeremiah, and Jesus would each, in turn, confront the most powerful structures of their times.

Despite the seeming success of Moses’ project and the significant detail to which the biblical text goes to establish an alternative society among the newly freed Hebrew slaves in preparation for the establishment of a new nation, the perennial temptations of the royal consciousness is demonstrated by its re-emergence in the nation under the reign of Solomon. The lavishness of Solomon’s household, lifestyle, and building projects—including the Temple—contrast starkly with the oppression, forced labor, and poverty of the people. Although primarily enjoyed by only a privileged few, the growing affluence is built upon but also reinforces political oppression, and the “static religion” Moses confronted is employed to give a theological justification for the political and economic status quo. The king—and those who constitute the ruling class—comes to be regarded as having a unique access to and favor from the divine, and many religious leaders are willing to endorse this political theology as a way of incorporating themselves into the power structure.

This loop of power, oppression, and theological self-justification leads to a failure of imagination among both the powerful and the powerless. Focused so much on maintaining their power and privilege, the powerful are unable to conceive of the end of their power, as inevitable as that might be. But what had been unimaginable was becoming reality, which renders a double loss to those who have been comfortable in the collapsing order. As a way of surviving seemingly unalterable circumstances, the powerless were reduced to numbness, unable to feel the ongoing insults, injuries, and even death. Amid this numbness—and partially in answer to this status quo—comes the cry of the prophet Jeremiah, calling the people to grieve both the end of their empire and the losses that have been experienced by so many of its people.

While the temptation is to avoid the pain of grief, Jeremiah insists it is the only real and faithful response. As such, it is the prophets’ role to call people to the genuine experience of grief as a first step in the prophetic act of imagining other ways of being and living in the world. However, such grief brings the risk of despair. While grief is necessary, Brueggemann contrasts the lament of Jeremiah with the hope proclaimed by Second Isaiah “as a prophet of hope to kings in despair” (page 68). In the scriptural narrative, the prophetic role is responsive to the national circumstances. Amid attack, exile and ongoing subjugation—in the context of grief—hope becomes the primary task of prophetic imagination.

In the Christian reading of the Hebrew prophets, this hopeful imagination always points forward to Jesus as the coming Messiah. But when Brueggemann’s attention turns to Jesus, he also argues that the ministry of Jesus can also be read and understood in the context of the tradition of the Hebrew prophets. He identifies the same progression of numbness and grief, despair and hope played out in the ministry and ultimately in the crucifixion and resurrection of Jesus.

Jesus’ life and ministry unmask and critique the oppressive powers of his day. From His birth, His healing miracles, His teaching, and His acts of resurrection, there are many examples of Jesus working to undermine the sense of assumption and inevitability that must be overcome before the status quo can be challenged. While Jesus focused primarily on the oppressed with whom He identified in so many aspects of His life and experience, “there are never oppressed without oppressors” (page 84). In turn, He challenged each of the powers that maintained the political, economic, and religious oppression of the people. In place of numbness, Jesus practiced a compassion that was all-encompassing and “a radical form of criticism, for it announces that hurt is to be taken seriously, that hurt is not to be accepted as normal and natural but is an abnormal and unacceptable condition for humanness” (page 88).

But Jesus was not merely a social or political critic. He demonstrated the prophetic imagination to which the previous Hebrew prophets had pointed. Despite the context in which He and most of His hearers lived and suffered, He insisted on a new and different kind of kingdom that was, even then, growing among them. While Jesus’ ultimate critique—even judgment—of the oppressors came in the context and process of His death by crucifixion, He re-energized the possibilities of transformative hope by His resurrection. In Brueggemann’s language, “the resurrection can only be received and affirmed and celebrated as the new action of God, whose province is to create new futures for people and to let them be amazed in the midst of despair” (page 112). While this is radically new, for Brueggemann, it is best understood in the context of the promises and hopes of the prophets who came before, as “the ultimate act of prophetic energizing” (page 113) that made space for life and newness, wonder and possibility.

Throughout The Prophetic Imagination, Brueggemann is alert to the practice of prophetic imagination. This is not a merely intellectual or spiritual exercise. Interacting with the lived realities of oppression and numbness, grief and despair, hope and energy, his project is a call to imagine a different world and to see communities of faith as centers of such imagination and compassion: “It is the vocation of the prophet to keep alive the ministry of imagination, to keep on conjuring and proposing future alternatives to the single one the king wants to urge as the only thinkable one” (page 40). Using the biblical narratives and Hebrew prophets as models and mentors, as well as sources of teaching and inspiration, leaders in these communities are called to speak and act with prophetic imagination.

The Prophetic Imagination offers a reading of the biblical prophets as those who insisted on seeing the possibilities of their world in different and more faithful ways, arguing that this is the fullest way of understanding their strident voices. As with any Christian reading of these scriptures, this reading finds its culmination in the life, ministry, death, and resurrection of Jesus, as well as providing context in which we can better understand Him and what He did and taught. The call that comes to us is to learn from and be challenged by this scriptural heritage, to live with prophetic imagination in our time and place, to imagine and create new ways of seeing and doing, and in so doing to create space for life energized by the hope, promises, and power of the resurrection of Jesus. And that is as relevant and urgent as ever—if not more so—40 years after Brueggeman first called for this renewal of faithful imagination.

Nathan Brown is book editor at Signs Publishing Company in Melbourne, Australia. He is completing a Master of Social Justice through Kilns College. His most recent book is Engage: Faith that Matters, available in paperback and e-book.