Second Annual Conference of the Donald Blake Center for the Study of Race, Ethnicity, and Culture

Second Annual Conference of the Donald Blake Center for the Study of Race, Ethnicity, and Culture 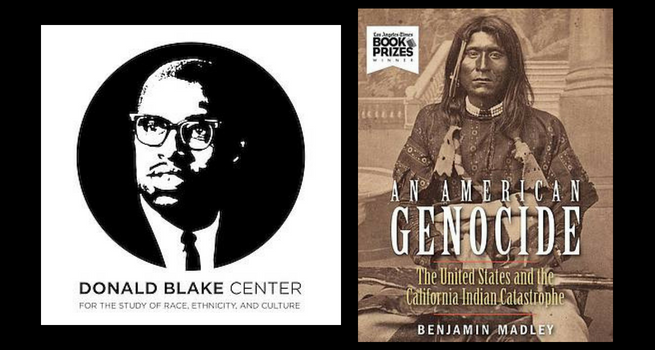 The Donald Blake Center for the Study of Race, Ethnicity, and Culture (DBC) hosted its second annual academic conference on April 19-20, 2018 on the campus of Walla Walla University. The keynote address was given by guest speaker Benjamin Madley, associate professor of history at UCLA, who spoke on the 19th century genocide of California’s Native American population and of its significance today.

Madley is the author of An American Genocide: The United States and the California Indian Catastrophe, 1846-1873, a detailed and painstakingly researched account of the fate of California’s Indians. In writing his book, Madley communicated with contemporary Indian tribes and dug into a wide range of sources including government records and historical eyewitness accounts.

“This is not a typical presentation,” Madley warned, “this is rugged.” Between 1846 and 1873, the population of California Indians dropped from an estimated 150,000 to 30,000, largely due to state-sanctioned genocide. Madley does not use the term “genocide” lightly, but rather bases his claim on the definition adopted by the United Nations in 1948 at the Nuremberg trials.

The killings were initially due to the wave of settlers and prospectors who came to California in the gold rush, which began in 1848, and as a backlash against the murders of missionaries Marcus and Narcissa Whitman near present-day College Place, Washington. In one of its first acts, the California State Legislature disenfranchised the state’s Indians and barred them from serving in the legal system.

Looking back on the genocide 145 years after its official end, Madley is often asked why he chose to research the topic. He says he did so because, “the stakes in this question are extraordinarily high.” By proving that the eradication of California’s native population was an act of genocide, the country can move forward and answer the subsequent questions that such a conclusion raises. Of primary importance is the question of how this historical trauma affects modern American Indians and their communities today. The dialogue with native peoples exemplified by Madley should be continued and expanded. For any true and lasting healing to occur, those affected need to be heard.

One way that the voices of the oppressed are heard is through organizations like the Donald Blake Center. The DBC is named in honor of Donald Blake, a member of the faculty in the WWU Department of Biological Sciences from 1962 to 1969. Blake was one of the first black tenure track faculty to be hired at a predominately white Seventh-day Adventist college or university. The center promotes academic research through annual conferences featuring keynote speakers who are leading academics on subject matter related to the study of race, ethnicity, and culture. The center offers pedagogy workshops on curriculum inclusiveness and multiculturalism and encourages student-led involvement in inner-city missions and social justice campaigns.