Third “Is This Thing On?” Conversation with Young Adults and Adventist Church Leaders in North America Held at Walla Walla University

Third “Is This Thing On?” Conversation with Young Adults and Adventist Church Leaders in North America Held at Walla Walla University 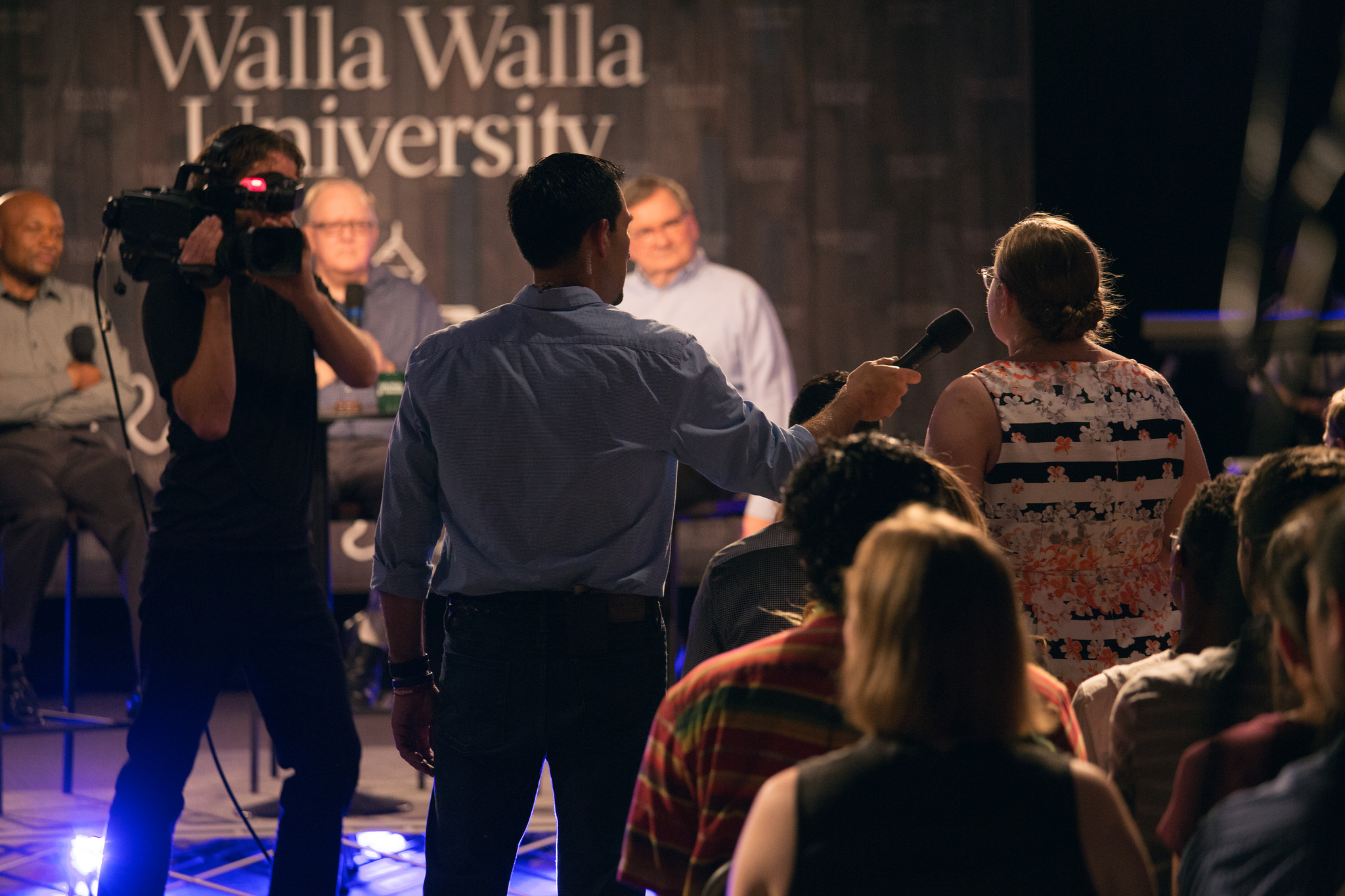 Leaders from the North American Division (NAD) of the Seventh-day Adventist Church engaged in conversation with college students on May 12, 2018, during the third “Is This Thing On?” (ITTO) video live stream. The two-hour broadcast took place on the campus of Walla Walla University (WWU), where more than 200 gathered in the Winter Educational Complex to ask questions on many topics, including term limits for church leaders, educational costs and opportunities, women’s ordination, social issues, church structure and finances, and opportunities for young adults to serve in church leadership positions.

In addition to Walla Walla student musicians performing for each show segment, five students were tasked with working as social media "ambassadors" during ITTO. Four of these students interacted with Muñoz periodically throughout the broadcast, sharing viewer statistics and questions that the NAD officers answered.

“This is remarkable that NAD administrators are reaching out to Adventist young adults and asking for their engagement with church leadership,” commented Facebook user Phil Muthersbaugh.

In another Facebook comment, viewer Joe Graffi said, “Thank you, young people/students for your willingness to stand up and ask tough questions. I am a 73-year-old who has the privilege of co-leading the youth in our Nixa, Missouri, [Seventh-day Adventist] Church. We are a multi-cultural church, nearly two-thirds of our congregation is Russian, and we all love and support each other and we are strong in the Lord because of our love for one another.”

Shortly after the event aired, Facebook reports indicated that the video broadcast received 8,000 views, 107 shares, and about 1,115 reactions and posted comments, which included almost 400 questions and statements regarding the conversation. More than 66,300 Twitter accounts were reached with 1,935,193 impressions.

The NAD Office of Communication created a Snapchat geo-filter for use on the Walla Walla campus for both the day before and the event day. More than 2,100 views, and 75 uses were recorded after the event.

“We are connecting with young adults on social media,” said Julio Muñoz, ITTO host and producer. “As we look through the data it is apparent that engagement, even during a time in the year when most of our NAD college students are not in school, was high. And the dialogue online reflected the show.”

Andrew Yamada, a junior electrical engineering major at WWU, said, “When students walked into the gym and saw how serious the NAD was taking it with all the production value such as camera, lights, music, and social media, it really made us feel like they care about what we have to say—that we have a voice for the NAD and can express our concerns.”

“I appreciate that the NAD leadership are willing and doing their best to seek out our voices,” said Katie Folkenberg, a junior social work major at WWU. “I think they will need to prove themselves for a lot of youth in the church to show that, yes, they heard our voices, and they're going to try and make some changes within the church.”

Near the end of the broadcast, Bryant talked about the importance of connecting with younger Adventists now. “I would like to challenge this body, along with other students across our division, to help us,” he said. “I think we started out dealing with the generational gap in our church — help us bridge that gap by reaching out to our seniors. The North American Division church is getting older. And many of our students and young adults, when they go to church and they see some people who are so steeped in tradition, they just kind of check out.”

Bryant continued, “I would encourage you: if you see your fellow students or brothers and sisters, help them to hang in there. It's not going to change overnight, but it will change, and we need you to help us to do that.”

Evans, who is a new guest to the show, agreed, describing how more young adults have already been participating in church meetings. He said, “These particular sessions that we've been holding here in the North American Division with the young folks in our colleges and universities have been a great thing. We meet with our administrative committee, probably once a month for a number of hours. And what we learn in these kinds of meetings does not go unnoticed. We look to see what the trend is of our church, and how we can also help.”

With some humor, Evans added, “And we do notice a younger group coming into our building all the time and, as some of us go out to pasture — as they say — we will see [more of] that. We look forward to hearing what you have to say. And we try to bring that into our everyday life in our office as we move forward.”

After the broadcast ended, Evans and the other NAD officers stayed almost another hour answering questions. Jackson expressed his interest in continuing the dialogue, saying, “The plain and simple truth is: you are needed and you are wanted in the church. Help us.”

Jackson encouraged those who remained to write him with suggestions on how the church should deal with the issues it faces. “I am very open to hearing your heart on this, so that we can consider what you have to say in more depth than we can afford in terms of time in a program like this.”

Plans are underway for another live event and a recorded show. Questions may also be answered in the interim — use #NADnow when tweeting/posting questions.

Watch “Is This Thing On?” Episode 3 at Walla Walla University:

This article was written by Kimberly Luste Maran, associate director for the North American Division Office of Communication, and originally appeared on the NAD’s website.

Image: "Is This Thing On?" host Julio Muñoz takes a question from the audience during the Facebook Live video event on May 12, 2018. Photo by Pieter Damsteegt, courtesy of the NAD.