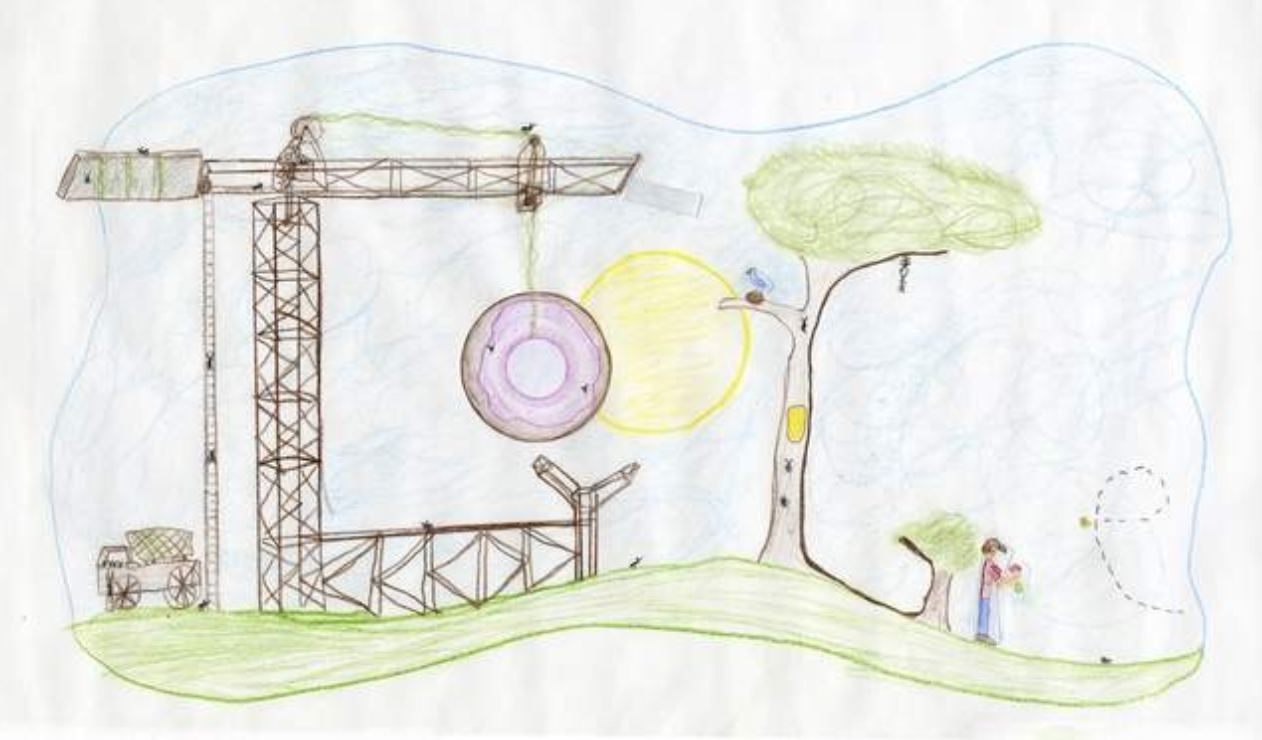 "Lessons from Ants" by homeschooler Nathanael Botes has been chosen as the winner from Montana, and is now in the running to be national winner and appear on Google's homepage. In this interview, Nathanael tells about how Proverbs inspired him to consider the ways of ants as a lesson for life and to remember how the Bible's promises have helped him to get through experiences of domestic violence and abuse.

In Nathanael's drawing, a crane forms the first G in Google, followed by a doughnut and the sun as the Os, two trees as the second G, himself as the L, and a flying bee as the E.

Question: How old are you, Nathanael?

You were selected as the finalist from the state of Montana in the Doodle 4 Google art competition. Congratulations! How did you decide to enter the contest?

Well, my mom found out about it and I thought it would be amazing to win it.

Do you draw a lot?

Nathanael’s Mom: He even draws on his schoolwork!

How did you decide what to draw?

I was inspired by Proverbs 6:6: “Go to the ant, thou sluggard; consider her ways.”

What made you think of that verse?

It just came to mind.

Yes. Except when they bite.

How did you decide to depict the ants working on a machine?

Originally I drew a small ant hill. But one of my brothers suggested that I draw something different.

Ants inspire me because they never give up, they never argue, and they work together. To the ants that doughnut looks impossible to lift, but together they can lift it into place.

When did you start drawing your picture and how long did it take you?

I started my picture on Monday when we figured out about the contest. It was due on Friday, and that was the day I finished.

Did you draw a few different versions?

I drew a few different ones the first day, then just kept improving the same one.

What was the most fun thing about drawing the doodle?

What was the hardest thing?

The doughnut. I had to get it just right, so it actually looked like it was round. Mostly when I was working on it I was just redoing the doughnut.

Did you ever imagine you would get this far in the contest and be the Montana winner?

No, but I hoped I would!

How did you find out you were a finalist for the national competition?

My mother surprised me at an open house for the Libby Seventh-day Adventist Christian School. Sometimes the homeschoolers get together there.

Nathanael’s mom: He was shocked. When we arrived, Google was already there and everything was all set up. When they said that the Montana winner was in the room, he kept looking around wondering who it could be. He forgot he was the only one there who had entered!

What did Google give you?

A certificate, a plaque, a Chromebook laptop computer, and a t-shirt and canvas bag with my picture on it.

And what does the winner of the national competition get?

A college scholarship, a grant for the local school, and more. The five finalists will go to California and the winner will be announced.

Animals, plants and birds. I try to make them look realistic.

I like studying science, and I like doing art. We have been studying about plants and animals.

A missionary. I want to learn how to help people if they have a disease or something. I want to know how to do multiple things. I would go wherever God wants me to be.

What is your favorite book?

Do you have a favorite Bible story?

What is your favorite Bible verse?

Psalms 34:7: “The angel of the Lord encamps around those who fear him, and he delivers them.

Does that verse mean something to you?

I know God will help me and keep us safe.

I understand things have not always been easy for you, Nathanael. Do you want to tell us a little bit about what has happened to you, and how God has helped you through the difficult times?

We had a life-threatening domestic violence situation with my biological father. Reading the Bible and praying helped me a lot. Plus my mom encouraged me to trust in God, and to trust that he would work things out so that we would be safe. There were many miracles God did to keep us safe and he also provided for us.

What advice would you have for other kids who might be going through something similar?

Pray for God’s help and claim his promises. Also to talk to an adult that you trust. That would help as well.

Nathanael’s mother says: Nathanael realizes the importance of helping and taking care of each other. Due to severe physical and emotional abuse by Nathanael’s father toward him, his siblings and me, Nathanael’s biological father is no longer allowed any contact. In spite of all the difficulties he has endured, Nathanael has learned he has a loving heavenly father who is taking care of him and his family through difficult and seemingly impossible times. Despite years of pain Nathanael still has a caring heart for others.

The five finalists will be revealed on June 4. You can see Nathanael's picture on doodles.google.com/d4g/vote.html#19.