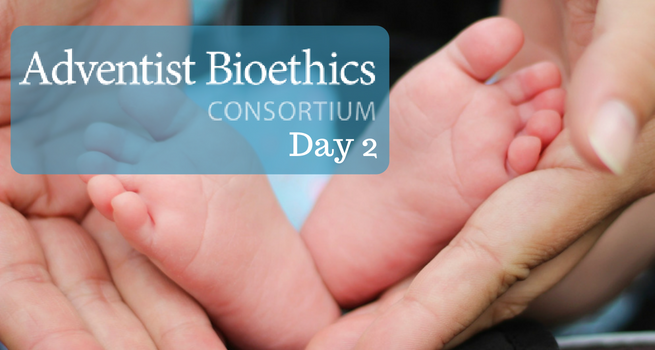 The second day of the Adventist Bioethics Conference on “Ethics of Faithfulness for 21st Century Adventist Healthcare” began with Dr. Gerald Winslow welcoming attendees with a proverb he heard on a trip to an African country: “You Europeans have watches,” said his host, “but we have time.” We have time, too, promised Winslow as he outlined the sessions for the day.

The first plenary session on “Mission and Ethics in Adventist Healthcare” was presented by Dr. Ted Hamilton, Senior Vice President for Mission and Ministry for the Adventist Health System, whose story line was built around the phone call he frequently gets from irate church members (“Always male, never female!”) who want to know why Adventist hospitals perform abortions. When the caller pauses for breath, Hamilton assures him that abortions on demand are never performed, but, following moral guidelines developed by Adventist ethicists and adopted by the world church, abortions are provided for serious threats to the mother’s life, for congenital birth defects that would result in an early death or severe disorders, and instances of rape or incest.

“The reasons we are doing this,” noted Hamilton, “are for a balance of justice and mercy.” These are issues of layered complexity, he said, and “At the end of the day it is up to the mother, perhaps in consultation with her doctor, maybe her pastor, perhaps the chaplain.” Quoting theologian and ethicist Miroslav Voth, Hamilton said, “A mother is not God, only a fragile human being living in a fragile world.”

Dr. Hamilton spoke about the influence—and responsibility—that Adventist hospitals have. “Who is responsible for the health of Central Florida?” he asked. “We have 27 hospitals in that area and 60% market share on the east coast.” When public health issues flare up, the Adventist hospital system has to step up and lead the way. Citing a publication by the Catholic Health Organizations that lays out guidelines for health care in communities, Hamilton asked, “How can we best explain who we are and what we do? How will our SDA organizations mature as they endeavor to bring institutional integrity, faithfulness to mission, social responsibility, and a healthy relationship to our church?”

He concluded his presentation with three phrases he hoped would provide a missionary model for Adventist bioethics: “Imago Dei,” recognition of the image of God in those we serve; “Imitatio Christi,” the imitation or following of Christ’s method of healing; and “Emfyto Dei,” the experience of the imminence or presence of God with us. “Will we be a prophetic voice to healthcare?” he asked.

The next plenary session was “Ethical Voices of Church Leadership,” featuring Angeline David, Peter Landless, and Katia Reinert, directors in the Health Ministries Departments of the North American Division and General Conference.

Landless began with an aside to Ted Hamilton, “Those calls that you get once a month, Ted—I get them every day!” He spoke about the anger that is directed his way by church members who do not understand why the Adventist church provides abortions. “The abortion statement is under siege constantly,” he warned, “But abortion is something we need to be transparent about.” That kind of honesty can only flourish when Adventist health care professionals, pastors, and church administrators work together as a team, he noted.

The theme of integrated practices, mission objectives, and cooperation between these three groups was a constant in the morning presentations. “When we meet together,” said Landless, “we meet as equals.” With a flair for phrasing, he referred to a presentation the previous day by saying “It’s not disparities and inequities—it’s iniquities.”

Katia Reinert, the Associate Director of Health Ministries for the General Conference, spoke of the need to understand the many cultures in the global church and the challenges they pose for accurately presenting health care information. For example, patient autonomy, one of the pillars of biomedical ethics, is not a concept that translates easily to some cultures. “What can we do,” she asked, “to help people understand the statements and guidelines that are already there?” Reinert assured the conference that Health Ministries, at both the division and General Conference levels, was there to support the efforts of those in the health care fields.

Angeline David presented the results of an informal survey she conducted on attitudes and knowledge of biomedical ethics among a smattering of church members, both professionals and laypeople. For example, 86 percent feel they don’t know enough about bioethics, but 76 percent felt that physicians and pastors should be responsible for raising biomedical ethics issues. Forty-four percent thought that physicians are the most qualified to talk about these matters, but 65 percent wanted to be part of the conversation, and a huge majority (80%) thought that pastors should be trained in bioethics.

During the questions and comments from the audience that followed, Peter Handless indicated that Andrews University is adding a health module to pastoral training at the Seminary.

The final plenary session was on “The Future of the Adventist Bioethics Consortium,” in which Gerald Winslow, the Director of the Center for Christian Bioethics at Loma Linda University, introduced the website for the Consortium (adventistbioethics.org) and its features. The website is open to members of Consortium partnering organizations and will be the primary location for FAQs about biomedical ethics, materials (such as the proceedings from the annual conferences), policy statements and ethical guidelines, directories of members, an online course for biomedical administrators, and eventually a compendium on how to handle ethical issues in which members can submit questions and receive answers from experts throughout the system.

The theme that recurred throughout the morning was the willingness, even eagerness, of health care professionals, pastors, and church administrators to work together on these pressing issues. The alignment between leadership and health care was neatly summed up when one of the conveners recalled a quote by Gerald Winslow that Adventist health care professionals “don’t want to be overseen, but neither do we want to be overlooked.”

The 4th Annual Adventist Bioethics Conference will be held May 6-7, 2019, in the new Adventist Health facility in Roseville, California.

Photo by Bonnie Kittle on Unsplash, logo courtesy of adventistbioethics.org.