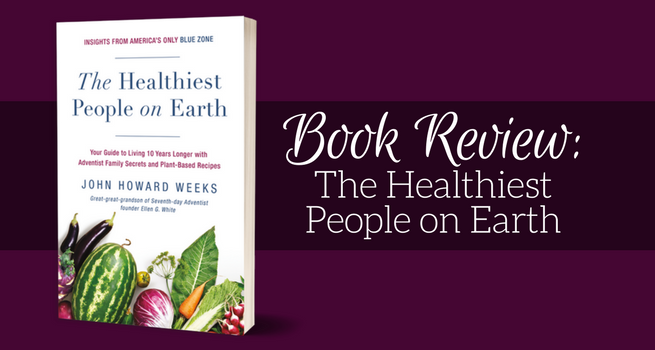 “I discovered that I could eat what is the most nutritious, the most delicious, most inexpensive, most uncomplicated, most time-saving, easiest-to-prepare diet that is available on our planet.”

So declares John Howard Weeks, who departed from and returned full circle to the healthful lifestyle practices in which his parents raised him. Weeks is a professional writer who has worked as a journalist and columnist as well as authored/coauthored or edited six books prior to his current one, The Healthiest People on Earth.

He is also the great-great grandson of Ellen G. White, co-founder of the Seventh-day Adventist Church and, particularly to the point, progenitor of the Adventist health message. This book is the narrative of his journey away from his parents’ Adventist cultural lifestyle norms of vegetarian eating and avoidance of alcohol, coffee, and smoking. He became enveloped in the gastronomical world of food and wine galas, monthly mail order wine clubs, and epicurean entertaining. And it took its toll. He moved on to trying every new diet that came along to reduce his accumulated weight. This treadmill continued until the year that he gave the eulogies at both of his parents’ funerals three months apart, saw the pictures of his overweight self with his family, and realized that the best approach he could take would be to return to his dietary roots.

This book is about the changes that he made and about encouraging others to do the same. It is written in a lively entertaining style with anecdotes about his life and that of his famous family. I found his contrast of Loma Linda with next-door San Bernardino very interesting. Loma Linda is the only Blue Zone in America (see Dan Buettner’s books on Blue Zones) and San Bernardino is home to the original chapter of the Hell’s Angels and the fast food industry. The first McDonald’s began there after WWII and they tutored or employed the founders of Taco Tia, Baker’s Burgers, Der Wienerschnitzel, Taco Bell, and Del Taco. All within a very short drive of the Loma Linda Market.

The Healthiest People on Earth appears to be targeted both to those who might be worried that there would be too much religion in it — “Not one bit of it anywhere” — as well as to those that would be interested in stories about the family and descendants of Ellen White. It is written for the general public rather than scientists. It lacks the nuance, distribution range, and individual variation that might be included in a discussion of how the studies that he mentions are actually done. At the end, he includes a recommended list of the books and movies that he has read/watched and that he references in the book. There are no scholarly journals as footnotes or as bibliography. Having said that, the general public would probably be more moved by a good narrative than by scientific references, and moving people toward change is the purpose of the book.

The author addresses diet, but also exercise, smoking (he quit), sleep, sex, alcohol and coffee (he’s dancing the moderation dance with those), and deals well with the issue of “cheating.” He has included “Happy Home Remedies” at the end of each chapter and recipes at the end of the book. There are recipes from various members of the White family modified to make them non-dairy. Examples are Buckwheat Griddle Cakes with Crushed Strawberries, Spring Rolls with Peanut Sauce, Black Bean and Blackened Corn Enchiladas, and Mom’s Lentil Roast (made with crushed cornflake crumbs, as all the best lentil roasts are).

Weeks has turned his personal experience and his writing skills into a book that will hopefully motivate others to make some of the same changes that he did. As he says, he is in the zone, the Blue Zone, and his readers can be in the zone, too.

Vicki Saunders, M.S., R.D, is Coordinator of Health Science Program and Professor of Nutrition at Pacific Union College and past president of the Seventh-day Adventist Dietetic Association (SDADA).