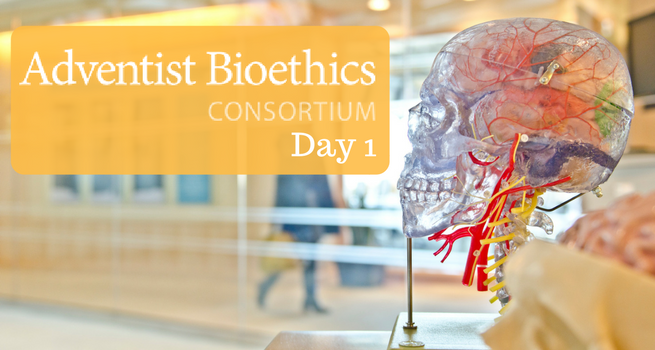 The Adventist Bioethics Consortium chose “Ethics of Faithfulness for 21st Century Adventist Healthcare” as the theme for its third annual conference, held in the North American Division headquarters building on May 7 and 8. Aimed at Adventist healthcare leaders but also attended by a number of pastors and educators, the conference immediately brought attendees to face some very timely hot-button issues.

Devotional speaker Peter Bath spoke of the necessity of timeliness, of updating our grasp of reality. He spoke of sailing with his uncle in a small craft on Lake Ontario in 1968, and of running aground on a shoal that his uncle declared wasn’t there: it couldn’t be, because it wasn’t on the charts. Then Bath found that his uncle’s chart was dated 1920, long out of date. Our chart — our understanding of the world around us — must be constantly updated. Bath’s message: don’t just say it, live it. The work of Christian ethics is to live like Jesus.

Keynote speaker Dr. Robert Orr, chosen by the American Medical Association as America’s leading clinical ethicist, described the history of his move, influenced by Everett Koop and Francis Schaeffer, from general practice into the ethics field, including 10 years as Director of Clinical Ethics at Loma Linda University Medical Center, a time remembered by many of Orr’s former students, now leaders in the field themselves, in today’s audience. Orr’s book, Medical Ethics and the Faith Factor is a standard in the field. Orr stressed that ethical dilemmas at the patient’s bedside are often caused by conflicting values and that the patient’s religious values must be honored.

The next plenary session was a presentation by Dr. Andrew Lampkin (Adventist University of Health Sciences) and Dr. Marilyn Link (Adventist HealthCare) on the Ethics of Health Disparities. Their objective was to define disparities, and investigate their causes and effects: ethnic, racial, and cultural, as well as the persistent burden and cost to society. They cited studies indicating that 30% of health care costs for black Americans result from health care disparities, and that eliminating such disparities would result in an annual cost saving of $200 billion. They stressed that only 20% of health outcomes are the result of medical treatment; the balance being attributable to environmental and cultural factors.

Link said that health care, in best practice, must be accessible, in plain language, with patient/provider coordination, cultural sensitivity, and be reflective of the diversity of the population served. Lampkin suggested that social justice means a society based on equality, based on American social values, international human rights principles and pragmatic considerations. He stressed that social justice is not the same as socialism, but did not expand on that idea. Such expansion and explication may prove to be very important in discourse with those who resist Lampkin’s assertion of health care as a human right.

The following session was on the “Science and Ethics of Sexual Identity,” by Dr. Kirby Oberg, Professor of Pathology and Human Anatomy, Loma Linda University. Oberg spoke of recent progress in our understanding of developmental biology, developmental pathways, genetic alteration and normal variations. He explained the process and effect of the hormone bath around the 20th week of pregnancy, and that rather than a simple matter of either an X or Y chromosome, it is now known that some 25 chromosomes are involved in gender determination. He discussed the 10 different syndromes involving sex reversal. It was obviously new material for many in the audience, as the questions revealed many struggling to find ways to clarify the cognitive dissonance between the implications of the scientific data and their religio-cultural beliefs.

After lunch, there were three breakout sessions, one for health care chaplains, another for health care executives, and the third continuing the discussion of gender and sexual identity. Dr. Albert Reece, Dean of the University of Maryland School of Medicine, opined that although we don’t know all the stimuli for biologic gender alteration, the possibilities include trauma and epigenetics. He stressed the difference between physical gender identity and what may be a very different identity in the brain. His point: with so many unanswered questions and so many possibilities, we must treat all with respect.

The question period following this presentation indicated the presence of two unrecognized elephants in the room: culture and biblical interpretation. Most if not all of the resistance to the acceptance of scientific evidence derives from efforts to not disturb either one or the other. The speakers circled around but did not address directly the truths that both cultural beliefs and practices, and treasured but mistaken biblical interpretations, must yield to facts newly understood, or, in good Adventist terminology, to Present Truth.

Mitchell A. Tyner retired as Associate General Counsel of the General Conference.

Photo by jesse orrico on Unsplash, logo courtesy of adventistbioethics.org.