Church-State and the Role of the Prophet

Church-State and the Role of the Prophet 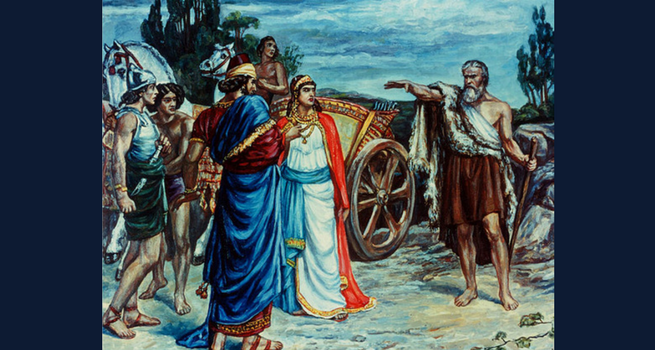 Several years ago I had the pleasure of meeting Dr. James Wood at a reception when I was a PhD student at Baylor University. I am not sure if Wood is well-known in academia (though he should be), but at Baylor he is well respected. Wood was the first director of the J.M. Dawson Institute of Church-State Studies at Baylor University (where I studied), guiding the Institute from 1958-1973 and then again from 1980-1995. A room in the Institute is named after him, and his picture is everywhere. My understanding from those who worked with him and under him is that he is a tireless defender of the separation of church and state and has dedicated his life to that work. As someone who also decided to take up that cause, imagine my excitement to finally meet this man about whom I had heard so much. At the time, Wood was 89 years old and in a wheelchair. However, it was clear, just from hearing him speak, that he was as sharp as when he was guiding the Institute.

I shook Wood’s hand and he greeted me warmly. He asked where I was from, and we talked a little bit about Philadelphia and some of my background. When I told him I had also started an MA in Religion, he asked where I began that degree. I was shocked that he was familiar with Andrews University and with the unique place of Adventists in the history of religious liberty in this country and around the world. When he asked where the church currently stood on religious liberty, I told him about the conservative move that many religious leaders in my church were making, becoming more in line with modern Evangelicals. It was at that point that Wood said something that surprised me, not so much because it was grandiose, but because I did not expect him to say it. He said (paraphrasing), “That’s disappointing. Without that institutional separation of church and state, the church cannot fulfill its prophetic role.”

I reminisced on this story recently as I thought about how Evangelicals are wrestling with (but holding strong in) their support of Donald Trump. Because the J.M. Dawson Institute tends to look at church-state issues from a political perspective, I did not expect the founding director of the Institute to be speaking to me about the prophetic role of the church. For those who are unfamiliar, the prophetic role of the church, basically, is the church as a societal and governmental critic. When we examine the role of the prophets in the Bible, they never sought an amicable relationship with the governmental powers of their time. They were critics, sent with a message from God to show how the nation of Israel had gone astray. For example, Nathan stands before David to condemn him for his adultery and murder. Elijah stands before Ahab to relay the judgment of drought over Israel. God sent Jeremiah to the temple gate to talk about the sins of Judah. Prophets rarely ever have a positive relationship with the government. Elijah was chased to a valley in hiding. Jeremiah spent time in prison. The church in its prophetic role must be free to speak truth to power. It has to have the ability to condemn the government when it does wrong. In a brief sentence, Wood expressed to me that when Christian denominations seek to curry favor with government (for whatever reason), they cut themselves off from the ability to criticize the government and speak truth to power. The separation of church and state is not primarily about protecting the state. Rather, separation of church and state is for the benefit of the church. That separation allows the church to fulfill its prophetic role and affect society for the benefit of all in the polity.

In the modern Evangelical conservative movement, we can see the dangers of abandoning the prophetic in search of political power and influence. The most obvious problem is that the church becomes oppressive, using political power in an attempt to cajole the consciences of others to live as they feel God requires. But just as problematic is the fact that Evangelicals fell into lockstep with the Republican Party in the 1980s, lending a spiritual imprimatur to every plank of the GOP’s platform. So bound are they to this particular political ideology, they effectively ruined their ability to be a witness to society at large and lost the chance to hold the state to a higher standard. Instead of being seen as a force for good in society, they are seen as puppets of the political structure. Several times in this space I have argued that the separation of church and state is not just of benefit as a political idea but that it is in line with the Judeo-Christian ethos as well. Dr. Wood reminded me of just why that it is the case—the church hampers its own effectiveness without it.