There is never a convenient time for university leaders to be thrown into a controversy involving a widely-condemned, racist image gone viral on social media. For Walla Walla University, which has been working hard to put out just such a fire, the timing was made worse by its overlap with the university’s spring break.

With most students and many faculty members away from campus for the break, the university’s response to the growing crisis was fragmented. Official statements on the university website coupled with comments on social media by university officials and even the university’s official Facebook account sought to contain the fallout.

On March 27, Pedrito Maynard-Reid posted on his Facebook page, “As the Chief Diversity Officer of Walla Walla University, I, along with other administrators, faculty, staff, and students, have spent many hours on this matter.” Maynard-Reid shared a link to a new, updated statement from the university that strongly condemned racism.

On March 30, after several news outlets including Spectrum had published articles about the incident, the university published a third response—an in-depth Question and Answer document responding directly to charges that the university is a racist institution and that it is not doing enough to address its lack of diversity.

The questions ranged from the informative (What’s being done with the students involved in this incident? What is WWU doing to promote diversity, and educate the campus about racism and other issues related to diversity?) to the mildly patronizing (Have some people experienced racism on WWU’s campuses?) The answers provided a thorough response to criticisms of the university that followed the social media firestorm.

The third update provided a lengthy list of initiatives Walla Walla University has undertaken over the last decade to become a more diverse school. Most significantly, the university established the role of chief diversity officer on campus (called the assistant to the president for diversity).

Students returned to campus on Monday, April 2, to a planned “listening session” for the entire university. Leaders said both private and public listening sessions provided students, faculty, and staff opportunities to share concerns about the social media post and reflect on how we treat one another.

The university’s Q & A further detailed the actions being taken on campus. The administration also made available extended counseling and chaplain’s office hours for students, faculty, and staff interested in receiving emotional and spiritual care, the statement said.

University leaders said they would address the issue of racism during Walla Walla’s weekly all-campus gatherings, altering class schedules to accommodate a series of “Let’s Talk” diversity-focused educational presentations for the campus.

“Beyond this first week, we will work with diversity and thought leaders to prepare other steps and learning opportunities to enhance our ongoing efforts,” the Q & A said.

Community response and calls for accountability continued into Monday as well. Adventists for Social Justice, an Adventist nonprofit of “Christians committed to being our brother’s keeper,” published a statement reiterating the need for consequences.

In the last few weeks, we have observed the circulation of blatant racist actions by students at Walla Walla University on social media. Adventists for Social Justice stands with others in calling for appropriate actions and consequences for all involved. We applaud the administration for their swift response and diligence in exploring the next course of action and we await the results of this investigation and the University’s commitment to social and racial justice.”

The statement went on to lament “repeated occurrences of racism within our denomination.”

Those hoping to see disciplinary measures meted out against the students who caused the uproar will have to be satisfied in the knowledge that the university will follow its own disciplinary procedures, the Q & A indicated. “WWU will be able to confirm that our disciplinary process was followed, but the university, by law, can’t release information about disciplinary actions that can be identified with a particular student,” the statement said, citing the Family Educational Rights and Privacy Act (FERPA).

On Tuesday, Walla Walla University President John McVay spoke to the whole school during the first of the planned university community conversations. In his nearly-half hour presentation, McVay explained to the student body what blackface is, why it elicits such strong negative reactions, and why the social media image of students seemingly in blackface with the Walla Walla University logo on it was so highly problematic.

McVay told the story of a young, black immigrant who along with her siblings experienced racist antagonism at a Seventh-day Adventist school decades ago. Her parents pulled all their children out of the Adventist school.

As an adult with her own child about to start school, she encountered the image of Walla Walla students with black facial peel masks and the word “Wakanda” on it. She called the university with the question, “Is a Seventh-day Adventist school a safe place to send my child?” The president became visibly emotional as he reached the story’s climactic question.

McVay translated the question this way: “Could I ever send my child to Walla Walla University?” 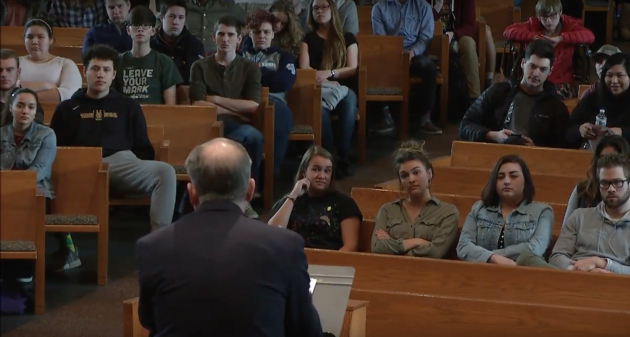 “Why should we learn about [blackface] and learn to avoid it like the plague?” McVay asked rhetorically. He provided an abridged history of blackface and its use by whites “to depict African-Americans through their own perceptions rather than allowing African Americans a sense of autonomy and self determination,” not to mention the cruelly demeaning stereotypes blackface generally included.

McVay used the biblical story of the Apostle Paul as an example of a figure who worked with theological motivations to eradicate cultural and racial barriers. He used the text of Ephesians to suggest four points: 1. All people are by nature racists and egomaniacs. 2. The races are already reconciled. 3. God has a strategic plan for the cosmos to unite all things in Jesus. 4. We [believers] have an important part to play in God’s plan.

Noting the Seventh-day Adventist Church’s emergence “within the crucible of the American Civil War,” McVay asserted that the denomination has “moral and theological commitments that reflect its origins.” Many denominational founders were ardent abolitionists, he said.

Bringing the Adventist story home to the current situation, McVay asked whether the prophetic spirit of the early Adventist pioneers could be “as strong today on the campus of Walla Walla University as it was back then.”

Using the analogy of a lingering knee issue for which McVay had been attending physical therapy, he made his closing point: “Healing takes extended time and dedicated effort.”

On Thursday, McVay said, students would have the chance to participate in one of five seminars (workshops). He called on all students to listen and to be willing to understand. He also invited students and faculty to attend weekend services at the university church, which he said would extend the conversation.