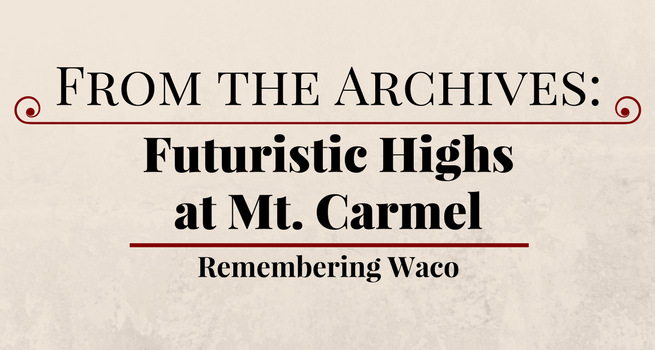 We all know quite well what has happened to the Branch Davidian cult. The TV tape of the killings and the conflagration have run as often as the Rodney King beating tape. The media has made us well aware of these political events. But there was a theology back of those immediate political events. Ultimately, that theology stems from a particular view of prophecy. Its roots come from the SDA Church of 1929, but branches have spread so far that the Adventist roots of Branch Davidian interpretations of prophecy are hardly recognizable any longer. How did this happen and how did these views develop?

While Vernon Howell, a.k.a. David Koresh (that is, David Cyrus), has put his own Messianic and psychiatric twist on those lines of prophecy, he still stands in line with the founder of the Shepherd's Rod movement or Davidians, Victor Houteff. Houteff cast the die for Davidian interpretation of prophecy. It makes an interesting bit of psychohistory to see how this developed. A convenient place to begin is November 1930. That was when Victor Houteff was disfellowshipped from a Seventh-day Adventist Church in Southern California. What was his prophetic response to that disfellowshipping? He developed what I would call "rejection theology." Having been removed from the church by the church, he turned his prophetic guns against it.

How did he do this? With a vision on January 1, 1931. In this vision, a number of biblical elements like the parable of the wheat and the tares, the harvest of the world in Revelation 14, and other topics, were turned against the Adventist Church. Previous interpreters of these biblical passages had seen them in terms of the whole world, good and evil. Houteff now saw them in terms of his followers versus those in the Seventh-day Adventist Church. He had been rejected by the Adventist denomination, and now the Lord, working on his behalf, would reject them. This was made all the more explicit by the use of Ezekiel 9. This prophecy, which was fulfilled in 586 B.C., was now turned against the Adventist Church. The angel with the inkhorn was going to mark and distinguish his followers from the Seventh-day Adventists at large, who were to be destroyed. This was his first blunder of interpretation—to turn already fulfilled prophecy for use in his own personal feud with the Adventist Church.

Houteff’s next step into the wonderland of personal prophecy was to adopt a theological Zionism. This was not Zion or Zionism for the Jews, but for Houteff’s followers. He had come to this egocentric conclusion sometime between 1934 and 1939. Before the coming of Christ, God was going to re-establish a Davidic kingdom in Palestine, as it was then called. The leader of that theocracy was to be the new David, Houteff himself. God would miraculously and destructively clear out both Arabs and Jews from the Holy Land so his followers could possess the land.

David Koresh only embellished this idea by taking the name of Cyrus. David was to accomplish with his followers what Cyrus did with the Jews—send them back to the promised land.

The contrast with Seventh-day Adventist theology here is stark. Only reluctantly have Adventist evangelists even admitted that Israel might come to exist. We still do not see that nation occupying a theologically significant role as an elect nation of God. Nor do we see any migration there of any other group to take over the land. For Adventists, there is no such intermediate step along the way to the second coming of Christ. That becomes the mere politics of this world. Not so for Houteff, or Ben Roden his successor, or David Koresh, the successor of Roden. The soon-to-be-established new Israel would be their kingdom, and they believed they would rule over it until the full coming of Christ. Then it would be transformed.

This is much closer to dispensational theology than to anything in Seventh-day Adventist prophetic interpretation. Adventists say that the restoration promises or prophecies of the Old Testament were conditional. They were not fulfilled, and they will not be fulfilled.

The third step in the drift into futurism was taken upon the death of Victor Houteff, in February 1955. In November, Mrs. Houteff said that she had received a prophetic vision that instructed her to apply the 1260 days of Revelation 11 in a literal way from the time of her vision until the coming of Christ.

This led to the establishment of the date of April 22, 1959, as the date for the Second Advent. Of course it did not happen, and this failure led to a splintering of the Shepherd's Rod movement.

But what is important here is to note that in terms of prophecy, the Houteffs had now rejected a standard principle of interpretation among Adventists. In apocalyptic literature, such of David and Revelation, prophetic times are symbolic, and should be interpreted according to the rule of a day for a historical year. Adventists have interpreted the 1260-day prophecy as fulfilled in past history, through the Middle Ages, leading up to the terminal date of 1798. Shepherd's Rods now applied them as literal and future. The prophetic Rubicon had been crossed.

We now come to David Koresh who, in his own psychotic way, grafted on this his futuristic strain of prophetic interpretation. He simply carried the method to a more illogical conclusion. In his long and rambling radio address, after the initial raid on his compound, Koresh proclaimed himself the Lamb of God found in the book of Revelation.

On what basis could he make such a claim? He said that he and he alone knew what the seven seals mean. Since that secret is the property of the Lamb to whom the scroll with the seals was given in Revelation, he would be the Lamb.

Well, what do the seals mean? They lie in the immediate future and are of catastrophic magnitude for the inhabitants of the earth. Beyond that, Koresh played his seals very close to his vest.

Seventh-day Adventists have also said that they know what the seals represent, but they have put them back in past history. The white horse and its rider of the first seal was the going forth of the gospel at the beginning of the Christian age. Historically, by the time we come to the fifth seal, with its martyred souls under the altar, we have come to the persecutions of the Dark Ages. The sixth seal takes us through the 18th and 19th centuries with the great earthquake, the Dark Day, and the Falling of the Stars. All of this was fulfilled by or before 1833 or 1844. Only the seventh seal lies in the future. Only it is connected, in one way or another, with the Second Coming.

The contrast between these two views is direct and uncompromising. The Adventist view has seen prophecy fulfilled before the coming of Christ. The Davidian view, on the other hand, has gone more and more futuristic in its interpretation, and has brought with it all of the excesses of that school of thought.

In truth, the prophetic views of the Branch Davidians at the Mt. Carmel compound were closer to those of Hal Lindsay than they were to the Seventh-day Adventists. That was precisely the reason why they branched off—they no longer agreed with the historicist views of the parent body. They were not sensational enough, they were not exciting enough, they did not provide that instant relevance that produces an eschatological high. They have also demonstrated how far one can go in this type of interpretation. It should be a warning to the church, since we have other futuristic interpreters and groups circulating on the periphery of Adventism.

A word should be said in conclusion about the 144,000. The Branch Davidians claim that they and those who will join them were to make up that group. The half dozen groups that split off from them in 1962, after the predicted coming of Christ failed to occur, also claimed that they and they alone are, or will make up, the 144,000.

Since the tum of the century, Seventh-day Adventists have not interpreted this number literally. They see a symbolic number with its components of 12,000 each as not made up of literal tribes of Israel, but spiritual tribes before the throne of God. The first part of Revelation, chapter 7, gives the symbolic number; the second part tells us that when this symbol is finally fulfilled, literally, around the throne of God, it will be a great multitude which no one can number. The Adventist view of the 144,000 makes it as inclusive as possible; the Davidian view makes it as exclusive as possible.

This article was written by William H. Shea for the May 1993 issue of Spectrum.