One of David’s Mighty Men 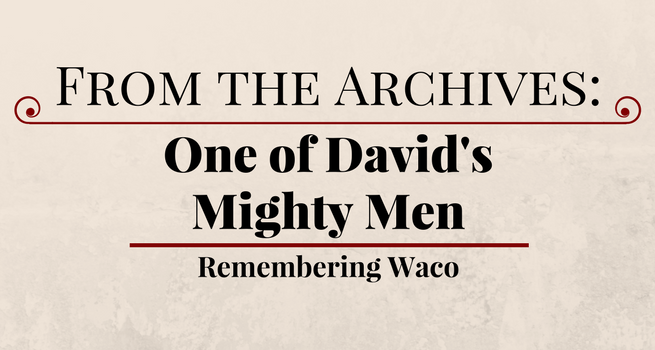 Editor’s Note: This year marks the 25th anniversary of the Waco Siege that occurred from February 28 to April 19, 1993. Throughout the coming weeks, we will be sharing on the website the articles that appeared in the May 1993 edition (vol. 23, no. 1) of Spectrum concerning this tragedy.

In this article, Kendra Haloviak Valentine interviewed Norman Martin, M.D., about his brother, Wayne—a Harvard-educated lawyer and one of Koresh's top lieutenants.

On April 19, 1993, as fire and smoke engulfed Ranch Apocalypse, Colonel Norman Martin, a career military physician and a member of the Sligo Seventh-day Adventist church, sat at his desk. He is Commander of the Andrew Rader Clinic at Fort Myer, Arlington, Virginia. A nurse rushed in. Norman's aunt was on the phone and it sounded urgent. Norman knew. Four of his nine relatives inside the Davidian compound had walked out several weeks earlier. Now, the five others were probably dead.

For members at Sligo church in Takoma Park, Maryland, news reports from Waco, Texas, have taken on an added dimension because Norman and his wife Joyce are members of our congregation. Norman sings in the church choir and sits on several church committees. Joyce is appreciated by parents in our congregation for her gifts as a physical education teacher at Sligo Adventist School. Norman and Joyce have two sons, Kyle, 12, and Neal, 10.

When he got the news about Waco, Norman knew that the body bags corning out of Ranch Apocalypse would include his brother Wayne Martin, a Harvard-educated lawyer reported to be one of Koresh's principal assistants, and four of Martin's children. Wayne Joseph, 19, was a bright high school graduate; Anita, 18, took much responsibility in the nurturing of her younger siblings; Sheila, named after her mother, was an independent 15 year old; and Lisa, who was 13.

The grandson of an Adventist pastor, Wayne was the best-educated person in the Davidian compound. While he, his wife, and seven children lived with the Davidians, Wayne carried on a successful law practice in Waco—until, of course, the bureau of Alcohol, Tobacco, and Firearms stormed the Branch Davidian compound, and the government began its siege. Wayne then became one of the few people Koresh designated to talk with the FBI.

Just three days after the fiery end of Ranch Apocalypse, an amazingly composed Norman sat in his living room and talked quietly about his brother, Wayne. Norman tried to remember if his brother's childhood had pointed in any way to the horror of Waco. It certainly didn't seem to.

Norman, two years Wayne's senior, grew up with his brother in a close-knit, middle-class black family living in Queens, New York. One set of grandparents, an uncle, aunts, and cousins lived within walking distance of their home. All the Martins actively participated in their local congregation, the Lindon Boulevard Seventh-day Adventist church, where Wayne was the pianist for the Gospel Choir. Their paternal grandfather was an Adventist pastor, and at one point in his life, Wayne considered entering the ministry. Wayne loyally attended programs and projects sponsored by his local church. Norman remembers trying to get Wayne to venture out and visit friends who attended other Adventist congregations. Wayne refused, preferring not to miss anything at Linden Boulevard.

Norman's best memories with his brother center around the summers they spent together at their Grandmother Martin's (her grandson's namesake) home on the New Jersey shore of the Atlantic Ocean. The cousins played on the beach, shared camp stories into the night and listened to baseball games on the radio. Norman particularly remembers his brother and the cousins rooting against the Yankees the summer Roger Maris hit 62 home runs to edge Mickey Mantle for the single-season home-run record.

Norman does remember that Wayne was a little more quiet and soft-spoken than others in the family. At summer camps, Wayne was very courteous and stayed close to kids from his own neighborhood. Norman would have to introduce him to campers from different parts of New York. On breezy summer evenings on the New Jersey shore, Wayne loved his grandma's tapioca pudding and Postum (with extra sugar), indulgences that left Wayne always beginning the fall school term overweight. He didn't appreciate being teased about it.

In high school, a very bright, sensitive Wayne looked out for the outsider, the underdog. He began challenging materialism and typical middle-class values. At first, Wayne followed in his brother's academic footsteps. Norman had always wanted to be a physician, so Wayne passed a special entrance test to attend a high school specializing in science courses. But differences in their personalities soon led them in different directions. While Norman pragmatically asked, "What's due next week?" Wayne pondered, "Why am I here?" While Norman pursued medicine, Wayne became fascinated with history and took his B.A. in legal library science at Columbia University. He found real pleasure in the library sciences.

Later, Wayne was accepted by Harvard's Business School to pursue an M.B.A., and was accepted in its school of law. After receiving his law degree, Wayne was interviewed by several law firms. Wayne chose campus life over corporate practice. Norman recalls: "Wayne just didn't have the corporate-killer attitude." He accepted a position at North Carolina Central University (a traditional black college) to teach and to be director of the legal library.

In New York, Wayne met and married Sheila Wheaton. They soon started a family. Shortly after the birth of their fifth child, James, Wayne and his wife, Sheila, watched as meningitis left their baby severely disabled. It was then that Wayne finally gave in to his wife's pleadings to meet Vernon Howell. They met in North Carolina. Shortly afterward, Wayne and his family moved from their home in North Carolina to Palestine, Texas (the group later secured property in Waco), where Wayne took Howell's side in the turf debate at Mt. Carmel. During and since that time, Wayne provided Howell with legal advice.

Reflecting on his brother's decision of almost a decade ago to join the Branch Davidians, Norman sees three factors influencing Wayne: (1) Sheila's pleadings; (2) meeting the convincing Vernon Howell; and (3) another opportunity to go out of his way to help an underdog. After all, the Branch Davidians and their leader weren't taken seriously by the majority of society.

During the past 10 years, friends and family who remember summer evenings together on the New Jersey shore, had tried to maintain communication with Wayne, his wife, and their children. Letters and gifts were sent regularly. Grandma Martin hid money in boxes of homemade cookies, so that her grandchildren could buy themselves something special on their next trip to town. Telephone conversations were eagerly anticipated on Thanksgiving and Christmas. Several times relatives visited with Wayne and his family, but Wayne usually arranged for these visits to take place away from the compound.

In 1983, Norman and his family made a professional move to El Paso, on the western edge of Texas. The two brothers met several times when Wayne drove west from Waco through El Paso to Los Angeles, in order to win converts to Vernon Howell. Norman remembers that conversations with Wayne usually focused on "Vernon." Often Wayne tried to convince his relatives of Bible prophecies that were to be literally fulfilled in the near future. At one time, Wayne believed that a prophecy in Ezekiel called for all families to move to Israel by 1987 for the return of Christ.

In 1991, Wayne's and Norman's parents, Joseph and Helen Martin, visited the compound to see their seven grandchildren (two more children were born after the family moved to Texas). Joseph and Helen's visit was very unpleasant. Howell maintained a constant presence. Howell scoffed at the Seventh-day Adventist Church, and at the Martins for their continued ties with Adventism. Joseph and Helen sensed that their presence caused an irritation and nervousness among Branch Davidian members. They vowed never to go back.

In March 1992, Norman (who has lived in Maryland since 1988), attended professional meetings in San Antonio, two hours south of Waco. He called his brother to set up a time to spend with his family. Wayne would not allow Norman onto the compound. Agitated, Norman asked his brother: "Why, do I pose a threat to the conditions of the children? Is there an armed person at the gate? Will Vernon Howell become violent?" Wayne never answered.

Norman remembers meeting Wayne at the Pancake House in Waco. Wayne showed his brother his law office and they enjoyed time with the children in a city park. At one point in the afternoon, some of Wayne's older children rode in their uncle's car. Norman recalls having "the urge to just keep driving…in order to save the children from life on a compound without the freedoms other American kids enjoy….Now I wish I had kept driving." At the time of this writing, two of the bodies dug from the remains of Ranch Apocalypse have been identified as Sheila and Lisa Martin, the children in Norman's car that spring afternoon. It is when Norman thinks of the children that he feels anger and bitterness over the Waco tragedy. "Healthy children should not be forced into bizarre life-styles just because their parents accept strange teachings from a madman."

According to Norman, the part of the news reports that most baffles him, is the arsenal of weapons amassed and used by the Branch Davidians. As they grew up together, neither Norman nor Wayne would ever touch a gun. Even toy guns were forbidden in the Martin home. The Wayne that Norman knew "…would have immediately packed up his family's belongings and left the minute he saw even one gun." A stranger to his own brother, Wayne, according to some newspaper reports, was one of David Koresh's royal guard, 20 "warriors" trained to use weapons and to train other compound members in their use. Federal agents reported seeing Wayne wearing a necklace of hand grenades when the shoot-out began.

During the ensuing standoff, Sheila and her three youngest children, James, 10, Daniel, 6, and Kimberly, 4, left the compound. The children are now in the custody of their grandparents, while their mother stays at a halfway house. During supervised visits between Sheila and her children, Daniel and Kimberly, who have been mostly raised by their older siblings, seem distant from their mother. From what Norman has been able to learn, the four older children were supposed to leave later; they never did.

Norman now struggles with mourning the death of a brother he has missed for almost 10 years. Norman experiences a mixture of loss, anger, and a strange relief at the deaths of his bright and gifted nephew and nieces—teenagers who no longer face the emotional abuse of Koresh's brainwashing. In our interview three days after the conflagration, I asked him, "How do you want your children to remember their uncle Wayne?" Norman answered, "That's a tough one…that's going to be a tough job." He added, "Every bad thought has turned into reality. All their (the Branch Davidians') prophecies have been fulfilled."

Kendra Haloviak Valentine is New Testament scholar and Dean of General Education at La Sierra University. At the time of this writing, she was a teacher in the religion department of her alma mater, Columbia Union College (now Washington Adventist University).