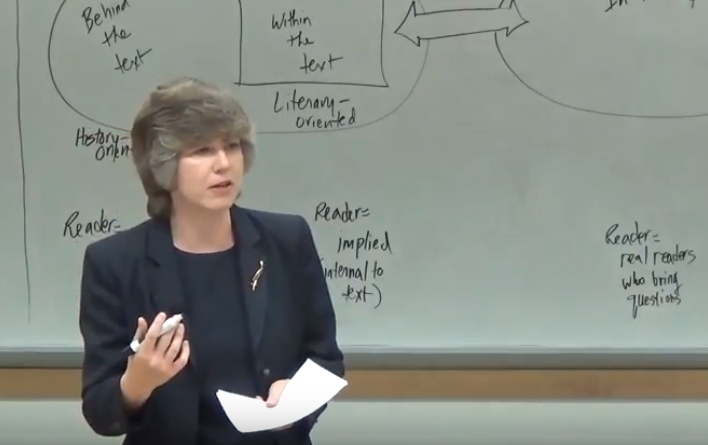 In Part 1 of this report, I offered brief summaries of each of the five presentations Kendra Haloviak Valentine made on biblical interpretation and Mark’s Gospel earlier this school year at the Roy Branson Legacy Sabbath School (RBLSS) in Loma Linda, California. In Part 2, I present some comments of my own which focus on the difference between modern and postmodern ways of studying the Bible.

The title of her series was “The Kaleidoscopic Worlds of Mark’s Gospel—a multi-hued hermeneutical perspective.” Watch all five video sessions at this link.

Throughout all my years of study after high school, I was taught that if we have enough information, if we reason well and if we follow the evidence wherever it leads, we would all agree about what a biblical passage first meant without regard to our personal identities and backgrounds. We typically introduced ourselves to each other at the beginning of each course in order to become acquainted and that’s all. We knew that we were different in many ways, however, we looked upon our differences as potentially more hurtful than helpful in interpretation.

We were instructed to “read out” (exegesis) of the texts what is actually in them. We were warned against “reading into” (eisegesis) them things that truly weren’t. Without using these very words, we were taught that the Bible is a “cultural classic” for everyone, that it is also a “religious canon” for us and other Christians, and that we should study it the first way before interpreting it the second.

When we turned to what the passage might mean for us today, we were encouraged to utilize all the other resources we had. This included for me the writings of Ellen G. White because I was an Adventist and still am. The Wesleyan Quadrilateral’s emphasis upon scripture, tradition, reason, and experience eventually became helpful to me in this second endeavor.

This is roughly what the “historical critical” method is all about. It is nontheistic, however, it is not necessarily atheistic. Indeed, the Interpreter’s Bible Commentary (Abingdon Press, 1952), one of the most widely used at the time, provided in parallel columns both kinds of interpretation for each text in the entire Bible. It was edited by George Arthur Buttrick who was one of the most highly respected Christian pastors, preachers, and professors of his time. This way of doing this made sense to me when I was student and it still does to a very large extent.

Haloviak Valentine told me that something very different happened in the biblical courses she took in graduate school. The professor and students introduced themselves to each other precisely in order to make positive use of their differences in their interpretations. They thought that this was beneficial in two ways. It made everyone more aware of the personal characteristics of each person which might bias his or her interpretation. Much more importantly, it encouraged each person to self-consciously read the text with his or her identity and background in mind and then to share the results with other members of the class. Far from always being distorting factors, these differences were thought to be valuable sources of interpretive insight.

Although Haloviak Valentine was not explicit about this, it is my impression that the difference between what the passages in the Bible once meant and what they might mean today received less emphasis in her courses than in mine. I have the same impression about the distinction between the Bible as a “cultural classic” and a “religious canon.”

It is difficult to imagine a more dramatic illustration of the difference between modern and postmodern interpretation. Yet I hasten to add that by definition there is no such thing as “postmodernism” but only a wide variety of “postmodernisms.” They all reject modernism’s excessive confidence in unbiased reasoning and neutral evidence. Beyond that, they vary so greatly that thinkers who are as different as Alfred North Whitehead (1861–1947) and Jean-Francois Lyotard (1924–1998) are both labeled “postmodern” by those who best know their works.

I understand from Haloviak Valentine that the professors and other doctoral students with whom she worked in graduate school preferred to think of themselves as “post-historical/critical” rather than “postmodern.” It is not difficult to imagine why.

The very real shortcomings of the historical-critical method are easy to highlight. Some of them are that it 1) takes the Bible out of the hands of ordinary people and gives it to specialists; 2) focuses too much individual passages which have dramatically decreased in size over the years: 3) depletes the Bible of its aesthetic as well as its ethical and religious appeal; 4) engages in fanciful speculation about how some things, such as Jesus walking on water, could have occurred; 5) exaggerates the difficulties in knowing anything about the historical Jesus; 6) pontificates without intellectual justification about what modern people can and cannot believe; 7) results at the end of research with a Bible that is as dismembered as are cadavers after medical and other students have worked on them for a year; 8) unaware of how profoundly European and male it is; 9) champions the good things but ignores the bad things about the Enlightenment; 10) slips too easily from non-theism to atheism. These shortcomings swiftly came to my mind as I typed this. How many more there must be!

Whether or not they actually have, some forms of postmodernism leave the impression that they have lost touch with the real world and the actual texts. The statements that reality is socially constructed and that interpretation is always from a particular point of view tell the truth, nothing but not the truth, but not the whole truth. It is true that our reality is social constructed. It is not true that our social constructions are reality. It is true that we interpret what the texts say from our points of view. It is not true that our interpretations from our points of view are what the text says. These distinctions and others like them matter in and out of our classrooms.

Our difficulty is that over time the gap which Immanuel Kant (1724–1804) rightly saw between things as they are in-and-of-themselves (noumena) and the same things as they appear to us (phenomena) has gradually widened so much that by now some thinkers sometimes appear to believe that we have absolutely no access to the way things actually are. I say “sometimes” because they tend to say such things in their courses and seminars but forget them when they board airplanes and stretch out on operating tables. This kind of postmodernism does not commend itself. Thankfully, it is not the only kind there is.

Haloviak Valentine’s series was exceedingly helpful because she emphasized the worlds “behind” and “in front of” the texts. Without the first, she could have derived her meanings equally well from a telephone book. Without the second, we would be unable to benefit from our individual differences nor be aware of how limited they are. The world “within” the text happily bridges the first two. These tether and correct what we see with what is actually there without collapsing the difference. Her interpretations are postmodern; however, they are not relativistic let alone solipsistic. In a word, they are “post-historical/critical.” This is why the videos of her series are worth watching!