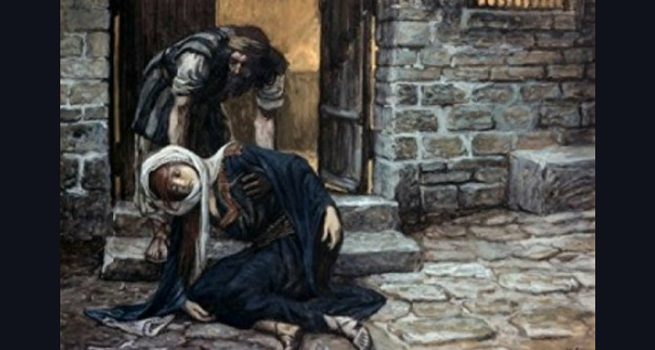 The #MeToo movement started as a trickle and turned into a tsunami late last year. Individual women, first as single spies who would turn into Shakespeare’s battalions and fed up with living with shame for the abuse they had endured, put voice to their inner turmoil and yelled — “No more!” And like an ant hill suddenly disturbed, initial isolated stories found company in a multitude of similar experiences, resulting in an army of restless soldiers whose collective silence could no longer be bought — not by fear of disbelief, reprisal, or self-doubt.

Suddenly, it is the right thing to do, to exorcise their abusers’ demons hitherto embedded deep within their troubled psyches. And maybe we, who believe in the gracious gospel of Jesus Christ, could learn from the experience of this movement. Perhaps we should re-examine some of our biblical traditions that have long seemed incongruous to the teaching of Jesus but which we have refrained from repudiating because they’ve become our cherished wrongs.

Like the newly liberated #MeToo inductees, who until recently feared that speaking up would cost too dearly, the time has come to look at how some stories in our treasured Bible might have innocently enabled some of the newly exposed bad behavior. Perchance it can lead us to find similar courage to recognize that, whether contained in the Bible or elsewhere, bad behavior must be forcefully called out. No longer should we lamely claim that such reprehensible behavior by men (and yes, it is often demonstrated by men, even if not exclusively), in biblical stories, merely reflect mores of a different time and environment.

No matter the era or environment, there have always been others who did not pillage or rape, murder or debase, though such was the normative behavior around them. Men abuse, rape, and murder because they can. They do not engage in these actions because they do not know better. The current #MeToo environment provides us a rare opportunity to confront some of the brutalities perpetuated against women, often with impunity, by taking a backward glance at the roots, even if we can only take in one scene at a time. One such retrospective glimpse, from the perspective of our Christian heritage, is to examine the possible biblical male contribution toward contemporary violence against women.

Women in the Bible, especially in the Old Testament (OT), were considered as property. The record shows that, after the fall, women were largely excluded from meaningful decision making or power sharing in the home or society. Over time, in subtle and sometimes not so subtle ways, women came to be regarded and often treated like children. Even in the relatively enlightened New Testament era, this view of Israeli women continued. It is exemplified in Matthew’s account of Jesus’ feeding of the five thousand when women and children were excluded from the head count. Likewise, it is not happenstance that in biblical Israel polygyny was embraced — virtually all the patriarchs had more than one wife — while polyandry was non-existent.

In a previous column article I mentioned the Judges 19 story of the Levite’s concubine gang rape as one I would not expose to children because there are deep ramifications that cannot be simplified for young minds. In this essay I return to that story to tackle some of its difficulties.

It begins by introducing the two main characters: a Levite, who by convention held a hallowed place in Jewish society, and his concubine, someone beneath a wife’s stature. Concubines were more identifiable as sex-slaves since, in OT Israeli society, they were often acquired simply for a man’s pleasure. We learn from the first few lines that something upsetting happened in the Levite’s home, causing her to leave him and return to the relative safety of her father. The Levite goes after her and eventually succeeds in securing her reluctant agreement to return with him. It is during this return journey that her dehumanizing nightmare begins and ends — with her gruesome abuse, death, and dismemberment.

With darkness fast approaching and the couple nowhere close to home, they go to the market place in Gibeah, hoping that someone in this Benjamite city would provide them hospitality. Eventually, an elderly citizen invites them in and pledges to take care of them overnight. While being entertained indoors, some local perverts surround the house and demand that he “bring out the man who came to your house, that we know him carnally!” (19:22 NKJV)

We quickly learn from the interchange between the house master and the besieging mob that the much-vaunted hospitality code of that time had strict limitations. As this story and its companion piece in Genesis 19 shows, this lofty rule, and many other similar lofty rules in the Torah, advantaged and protected only men. When the scoundrels demanded that he give the Levite over for their carnal pleasure, the host is horrified and, with sanctimonious indignation, remonstrated: “No, my friends, don’t be so vile. Since this man is my guest, do not do this disgraceful thing” (19:23 NIV). But almost instantaneously he saw a way out; “here is my virgin daughter and his concubine. . . . You can use them and do to them whatever you wish. But to this man don’t do such a disgraceful thing.” But the men would not budge, so the Levite “took his concubine and sent her out to them and they raped her and abused her throughout the night, and at dawn they let her go” (19:24-25 NIV).

And therein is the crux of the whole sordid business— the relative value of women — of our mothers, wives, sisters, daughters, and nieces — against one man’s “honor.” Both in this story and the Genesis account, a man’s reputation is easily secured by betraying our daughters and spouses to sadistic predators. When men are threatened with abuse, it is “vile” and “disgraceful.” But if it is against women, the brutes can “do to them whatever [they] wish.”

In the morning, the Levite opens the door to continue his interrupted journey. The writer paints one of the most callous portraits of self-absorption in all literature with the Levite’s indifference to the plight of his erstwhile concubine as he commands her to “Get up. . . . We must leave” (19:28 NJB). Did he even remember the events of the prior night?

If we find these men’s behavior awful and wonder how they can get away with such dastardly acts, the answer is summed up in one word: property. Women, like slaves, were property in patriarchal Israel. And in the words of Joe Greig, the sage of my Sabbath School class: “God is male, and until we reinvent the order where the woman is not property, the status quo remains.”

But who was this woman? She had no name and was never given a voice to speak for or defend herself. She was the property of a man in a world of men, none of whom would give aid in her hour of need. Early in the story, we are told that she was a “whore.” (19:2 KJV) The Hebrew word that was translated “whore” or “unfaithful” in other versions, is zanah.  As is the case with most words, zanah has various meanings. Its primary meaning includes committing fornication or being a harlot.  It is this primary meaning that is used by versions which describe her as a “whore,” “played the harlot,” or “unfaithful.” But this word also has other secondary meanings, including “to be angry,” “hateful,” and “feel repugnant against.”

Here is where the story’s context helps to determine appropriate meaning choice. The context describes a concubine who leaves her husband’s home and protection and goes back to her parental home. The husband goes after her to “speak tenderly to her.” (19:3a NJB) It is difficult to believe, considering the societal underpinnings of honor killing (Gen 38:24) for infidelity, that a truly aggrieved husband would go after his deceitful wife with flowers.

Newer Bible versions recognize the error of using the primary meaning of zanah (whore, unfaithful) because it does not support the Levite’s subsequent actions.  They now use variations of other secondary meanings in this verse. The NRSV substitutes the offensive “whore” or “unfaithful” with “became angry” while the NJB renders zanah as “in a fit of anger.”

The change is important because, while earlier versions tar her as a “whore” and effectively blame her for ensuing events, the NRSV puts the blame closer to the Levite for perhaps provoking her anger, suggesting that she left due to a domestic dispute. Based on earlier faulty translations of zanah as whore, Matthew Henry, commenting on this story, blames the girl and especially her father for accepting her when she returned: “Her father ought not to have countenanced her sin. Perhaps she would not have violated her duty to her husband if she had not known too well where she would be kindly received.” Phyliss Trible is right in her perceptive assessment: “Captured, betrayed, raped, tortured, murdered, dismembered, and scattered — this woman is the most sinned against.” (Texts of Terror, Fortress Press, 1984, p 81)

It also appears that the sins against her did not end with her dismembered body. The all-male clergy who “mistranslated” zanah in the KJV continued heaping indignities on her long after she died. If ever there is an argument for female representation when discoursing on marital affairs, here is one. The presence of just one knowledgeable woman on the translation committee might have alerted the men that something about the woman’s characterization did not add up in light of the Levite’s conduct.

While she was alive, no one spoke for her; even God seemed absent during her ordeal. When her story was written, she was cast in the most unflattering light — with insinuations that she shared the blame. Now that we know differently, we should, at the very least, attempt to right the record. Her story resonates because, long after she met her cruel fate, women have continued to be subjected to similar heinous crimes — just for being women. “#MeToo! #MeToo!” Her anguished cries ring in our conscience. Give her a name! Restore her dignity!