Today students across the United States walked out of their classrooms at 10:00 a.m. in voluntary demonstrations against gun violence in America. The walkouts came one month after the Parkland, Florida shooting of students and teachers at Marjory Stoneman Douglas High School. Seventeen were killed in the shooting and seventeen more were injured.

I spoke with several students, parents, and faculty members about the events to find out how Adventist schools took part.

“My mom had been working only a block away from where the shooting took place,” Vargas said. “When we found out about the shooting, I was not able to contact her.” Vargas said she felt out of control and angry. Then a month ago while watching a broadcast of the Parkland Shooting, Vargas realized something had to be done to bring about change.

She found out about the National Walkout Day through Instagram and proposed to her communication class that they take part. After her proposal failed to take hold, she again suggested participating to her College English classmates who took charge of the event.

Vargas’s College English teacher Danelle Taylor said that the whole class chose to participate by leading discussions and praying with the students who walked out. “After Ivanna started the event, she explained they would get in small groups to make sure everyone understand why they were walking out today,” Taylor said. “In small groups students talked about their positions on gun control and school safety with each other.”

Taylor estimated that at least 200 students—about half the students in grades 8-12—participated in the event. Student leader Kenda Ukiru closed the event by asking everyone to form a large circle and by praying for victims of school shootings. She also prayed that the walkouts would spur positive change.

Tami Belleau, who teaches 8th-grade English at Loma Linda Academy, said that some students asked if they could do more than just walk out. “Their teacher (history teacher Nestor Desia) took the teachable moment to talk about writing to their representatives, and several wrote letters and emails throughout the day,” Belleau said.

Students at Redwood Adventist Academy in Santa Rosa, California, wrote messages with chalk outside their school while a security officer looked on during the walkout. Kaitlyn Mulindwa, the mother of a Redwood Academy student, shared a Facebook post explaining why she cannot be silent concerning gun violence. “To see our children sitting on the street armed with nothing more than chalk, hope and security, and recognizing what they are having to fight for . . . that’s where my silence has to stop,” she wrote. 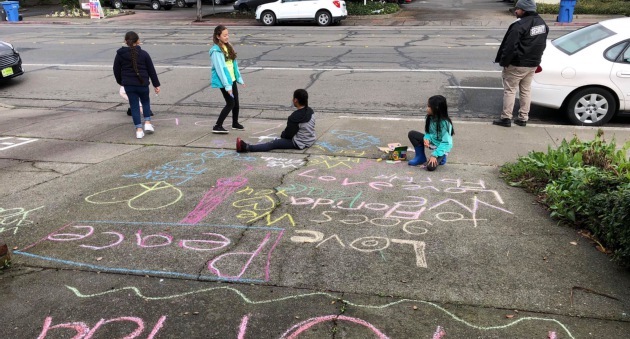 Takoma Academy in Takoma Park, Maryland, posted videos on the school’s Facebook page of students providing their thoughts on the walkout. In one video, Takoma Academy student Rachel John said, “As teens, we need to be able to stand up for what we believe.” The off-camera interviewer asked John whether she felt safe at Takoma Academy. “Sometimes,” she said.

Social Work President Kelsey Duran provided introductory remarks about the Parkland shooting, and history professor Monty Buell recited a work of poetry. Seventeen students ascended the stairs in front of the Chan Shun Pavilion, each reading the name of one of those shot in Parkland. Then, following a moment of silence, students returned to classes.

“It was really nice to take 17 minutes out of our day to remember those lives that were lost as well as recognize that we need to take a stand against gun violence and say enough is enough,” Schmidt said. 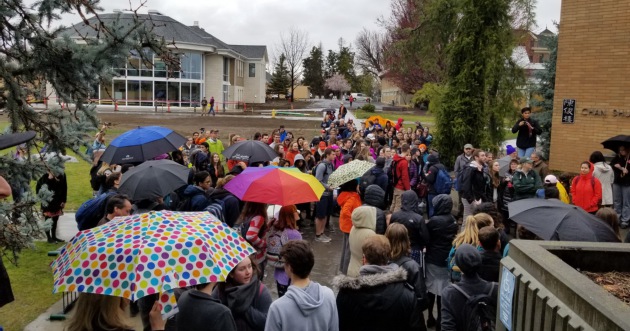 Kyrk Defino, Editor-in-Chief of Andrews University’s Student Movement newspaper, organized a small event on the Andrews University campus. “I wanted to give students who felt compelled to act on their convictions a space and an opportunity to do so,” Defino said. “I was fortunate to have many members of administration voice their support for this kind of platform.”

The university’s Media Communications Manager Gillian Saner shared a statement that was released campus-wide on behalf of President Andrea Luxton. The statement said several students voiced desire to participate, “citing their Christian duty to hold each other accountable for the lives of their fellow brothers and sisters.” The statement expressed the university’s support of the walkout and stated that faculty and staff were asked to accommodate students wanting to participate in this national event where possible.

Defino said that despite minimal advertising of the event, he was happy to see several dozen students, at least, braving the freezing weather “to not only remember the tragedies but think about our responsibility as Christians when it comes to guns and how to respond to it.”

For some, the perception of partisanship intruding into Adventist classrooms did not sit well. Having heard rumors of participation in the Walkout by Rogers Adventist School and Walla Walla Valley Academy, Walla Walla resident Melanie Rasmussen wrote a Facebook post asking whether her friends could confirm what she had heard. "I decided to ask a question on Facebook and tag a few people to get their opinion on what had occurred and if the rumors were true," she told me in an email. The resulting discussion became a lengthy debate over the appropriateness of Adventist schools appearing to take sides on politically contentious issues. The Facebook thread drew in many angry commenters, some threatening to withhold funding of schools that took part. One respondent said that although he had donated to one of the schools for twenty years, he would not give another dime if the schools participated.

Some who commented recommended nearby Liberty Christian School as an alternative. One parent said, "I'm happy to say that Liberty Christian School decided to let kids be kids and not participate in this ridiculous thing called national walk out day. I'm so so glad my kids are attending the school that demands respect from students, teaching my children to love the country and to be respectful of the oval office no matter which president hold the office."

"My own personal opinion," Rasmussen said, "is that Adventist schools at the high school level and below should remain neutral on political issues as they have in the past, the main reason being that they are accountable to those who fund them through tithe, private donations from alumni and worthy student funds." Rasmussen noted that Adventist donors come from diverse backgrounds and divergent political starting points.

The Facebook conversation remained largely speculative until a teacher at one school and a student at another joined in.

Connie Gish, one of the 7th-8th grade teachers at Rogers Adventist School, commented on the thread saying that the event at Rogers included "no discussion of gun issues." Gish said that teachers and students talked about school violence from the standpoint of helping to stop it before it starts, emphasizing the school motto, "Kindness starts with me." She said conversation revolved around watching out for students "who seem to be hurting or on the margins." Gish said the 7th and 8th grade classrooms joined together in the hall silently and prayed for the victims of violence, asking God for eyes open "to ways we can treat each other with kindness, respect, and inclusiveness." She emphasized that the event was about "seeing others through the eyes of Jesus," not politics. 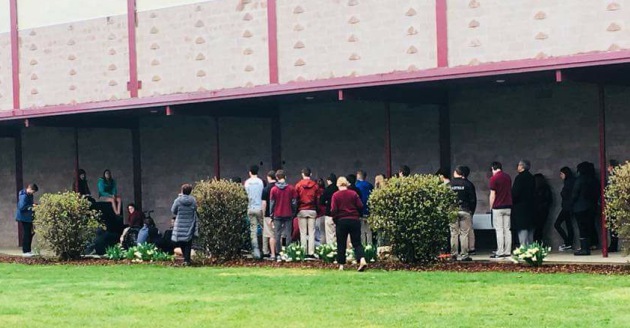 Participants in Melanie Rasmussen's Facebook thread re-posted this picture as proof that WWVA students took part in the Walkout.

Jenna Wagner, a junior at Walla Walla Valley Academy, joined in later and said, “Today we walked out to support the Parkland community and to honor the 17 lives that were lost on February 14.” Wagner added that sitting in the cold for 17 minutes of silence was the least students could do “to show them how much they are loved and valued.”

Indignant that people were speculating about the event without having facts in hand, Wagner wrote, "We did not discuss politics during our walkout. So don't attack us, or say things about my school or friends that are not true, because we came together in love and prayer."

Some Adventist schools like Collegedale Academy in Collegedale, Tennessee, held other pre-scheduled events instead, avoiding the issue altogether. Collegedale Academy hosted astronaut, scientist, and educator Don Thomas for National Pi Day. A spokesperson for the school told reporter Rosana Hughes Rodriguez that students would have been permitted to participate but did not organize an event.

*UPDATE Following publication of this article, Caroline Alexandrae Fisher, an English teacher at Tulsa Adventist Academy, wrote in a Facebook comment to this article, "My high school English students read the names and short bios of each victim. #NationalWalkoutDay." Then we heard from Crystal Jovanna Ferguson, a Guidance Counselor at Northeastern Academy in New York, NY, who said, "some Northeastern Academy student's walked out and created a number of questions that deserved critical answers by so many of those that are in power."

Jared Wright is a News Correspondent for SpectrumMagazine.org.