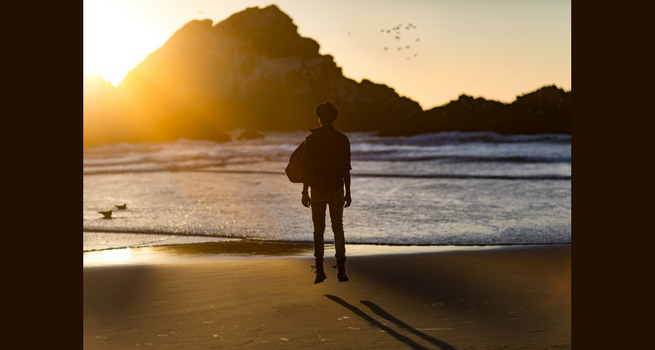 “In the transition stages of falling asleep and waking up again the contours of everyday reality are, at the least, less firm than in the state of fully awake consciousness. The reality of everyday life, therefore, is continuously surrounded by a penumbra of vastly different realities.” —Peter Berger, The Sacred Canopy, 42.

Somewhere, I once read that Salvador Dali would take a nap every afternoon in the heat of the day, lying upon a couch with a spoon clutched in his fingers. As he slipped into sleep and his fingers relaxed, the spoon would clatter to the tiled floor and Dali would spring up, his head full of the bizarre images that we see in his paintings—headless torsos, eyes on legs, soft clocks dripping over the edges of tables, crutches supporting distended body parts. It was from this transition state that Dali derived so much of his imaginative power; he had learned how to lure it up from the depths and coax it out into the harsh light of day. Such a wonder should not go unremarked.

I have experienced something like this time and time again, usually while waiting at interminable traffic lights in my commute to the university where I teach. Lest the reader draw the conclusion that I am an accident waiting to happen, let me say that so far my powers of concentration and alertness haven’t let me down. I may also have guardian angels who draw down overtime and hazardous duty pay.

My Dali state does not take the form of vivid images, but of words that, for the brief duration of seconds, are like overhearing the one-sided conversation of an alien anthropologist reporting back to base camp. With eyes half-closed, I marvel at the collision of ideas, metaphors that lunge out of dark crevasses, similes like clanging cymbals, and the occasional meteorite of a thought arriving at the speed of light from a distant galaxy. I wish I could conjure up this stuff when I’m staring at a blank computer screen.

Being a product of the 20th century, I naturally view all this through psychologically-tinted glasses. It’s all there in the unconscious, I say, so at some point I must have snatched up these bright baubles and tossed them into a bin for later use. But instead of a sober and reflective scrutiny of them through the lens of reason, I see them flung in the air, catching the light as a mad juggler tosses them from hand to hand. In the Dali state they have a coherence that vaporizes when the light turns green and the SUVs around me lumber into motion. Just as our dreams impress us with their genius in the dark hours, but seem overwrought in the first light of day, so the messages one gets in the Dali state find a place in polite conversation only with difficulty.

Yet, in pre-modern times such messages were often thought to be of divine origin, having arrived in the nick of time to avert catastrophe or to predict one. Millennia before Freud lit his torches in the labyrinthine tunnels of the mind, the boundaries between waking reality and the visions that unfolded behind the eyes of Ezekiel, Jeremiah, Isaiah, and many more throughout the centuries, were seen as permeable. Not only that, the scripts of these ultimate reality shows were written down, turning the mysterious and numinous into prose for us to ponder in these witless and distracted times.

Would we know a vision if we saw one? I’m under no illusion that these traffic-light dreamlets are anything more than the venting of steam from an overactive curiosity reactor, but that’s partly the point here. The “plausibility structure” of ancient religions made room for such phenomena; there is no space in our metaphysical blueprints for anything like that. Maybe we see no burning bushes, not because they don’t exist, but because we’ve ruled them obsolete.

Dali used these intimations for his flights of visual imagination; John Lennon would read in his garden and then look up and hear music to the words for a song he was working on. However they appear to us, they come from the same place, I believe, and that is our consciousness.

Huston Smith, one of the greatest teachers and scholars of the world’s religions in our age, explored this in one of the last books he wrote, Why Religion Matters. He thought of consciousness not simply as “an emergent property of life, as science assumes, but instead the initial glimpse we have of Spirit,” and likened it to a screen upon which is projected our perceptions, sensations, dreams, thoughts, memories, and feelings. “The light itself,” he writes, “without which no images would be possible, corresponds to pure consciousness…the common property of us all.”

We Protestants and we Adventists hold a resolute consistency in hewing to a sober, almost literalistic, perspective on this life. In our desire to define the lines which we are to toe, we brush aside the imaginative impulse, preferring the legal to the hopeful. Our art, our symbols, and our worship are the poorer for it. To walk into an Adventist A-frame church on a Sabbath morning is to realize the triumph of the utilitarian over the holy. There is little chance to be awed, even less to catch a glimpse of the sublime. We could do better, and without exorbitant cost.

It’s a paucity of imagination, a bankruptcy of collective consciousness, the desertification of the Spirit in our midst. Young Adventist artists, musicians, writers, and film-makers who have been discouraged as children from opening up their imaginations, may struggle not only to excel in their arts, but also to channel the Spirit in creative ways. It takes practice from an early age to allow one’s imagination to emerge and to flourish.

I’ve longed to sense the numinous, “to dream dreams and see visions,” as Isaiah promised the Hebrews 2,700 years ago. While I seem to have little capacity for transmission, I do believe the receptors are there. Perhaps the signal needs to be amplified or there is presently too much noise in the channel. Wordsworth lamented:

The world is too much with us; late and soon,

Getting and spending, we lay waste our powers;

Little we see in Nature that is ours;

We have given our hearts away, a sordid boon!

We see now in a mirror darkly, and our efforts to know God as we are known are—for this time and place—stunted and bound. But, if nothing else, that channel of consciousness can be deepened and widened, its banks cleansed of the litter left behind after our floods of guilt and frustration. We can, we are told, open ourselves to “the promptings of the Spirit” if we open up the bandwidth.

I want to unfold.

Let no place in me hold itself closed,

for where I am closed, I am false.

I want to stay clear in your sight.”